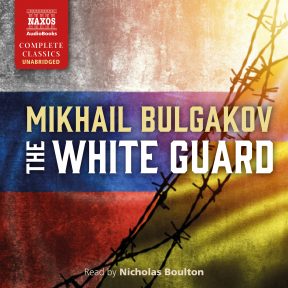 ‘By the reckoning of some Kievans, they have had 18 violent changes of government. Some hot-house writers of memoirs have counted 12: I can state accurately that there were 14, and moreover I personally witnessed 10 of them.’ Mikhail Bulgakov

So Bulgakov wrote of Kiev, describing the anarchy in that city at the end of the First World War. This chaotic situation was not so much caused by the Bolshevik Revolution in Russia as by the Brest-Litovsk treaty (recognising the sovereignty of the Ukrainian People’s Republic), which resulted in the incursion of 450,000 troops of the Central Powers (Germany, Austria-Hungary, Bulgaria and Turkey) within 24 hours of its signing.

This is the backdrop to Bulgakov’s novel The White Guard. The author had himself returned to Kiev (as a doctor he had been on the front line in 1916, before transferring to a rural hospital), but he ran the risk of being forcibly conscripted. Many of his experiences at that time appear in The White Guard – for example, the traumatic experience of witnessing the torture and murder of a Jew.

At the centre of the novel is the Turbin family (which is middle-class Russian, but born and bred in Kiev), who are presented in an almost romanticised light – they are liberal, open-hearted, pro-Semitic, while also being devoutly Orthodox and having no desire for popular sovereignty. The family remain at the centre of the novel, and one of the central characters, Alexei Turbin, like Bulgakov a doctor (and also an officer in the White Guard), is perhaps the most credible in the book. It is he who proclaims what is one of the central themes of the work – that the dehumanising and destructive force of modernity, represented by the Ukrainian nationalist forces, will destroy the traditional family home.

The Kiev of that turbulent time, full of doomed refugees from Moscow and St Petersburg, is vividly portrayed. Bakers and industrialists mix with artists, actors and prostitutes in the city’s shops and cafés. Their stories are deftly told through overheard conversations and street scenes. Between descriptions of severe shortages of supplies, corruption and anti-Semitism are calmer glimpses of the city, such as of the large monument of Saint Vladimir and Saint Sophia’s Cathedral.

The novel found a later lease of life when Bulgakov was invited by the Moscow Arts Theatre to adapt it for the stage – the play going into rehearsal in early 1926. However, after the first dress rehearsal, the Chief Repertory Committee intervened, declaring that ‘The White Guard is from beginning to end an apologia for the White Guard and… is completely unacceptable: it cannot be staged in the form adopted by the theatre.’ Further alterations were made, including the addition of the Internationale, sung by the youngest Turbin brother, Nikolai, at the play’s close. Although it was met with a negative critical reaction, the play, under the title The Days of the Turbins, proved popular, and Stalin saw it no less than 15 times. It was through a subsequent phone call with Stalin that Bulgakov secured a permanent position at the Moscow Art Theatre.

Our recording of The White Guard, in a superlative reading by Nicholas Boulton, features the 2012 translation by Roger Cockrell.