The Worzel Gummidge Audiobooks – Children’s Fiction for All Ages 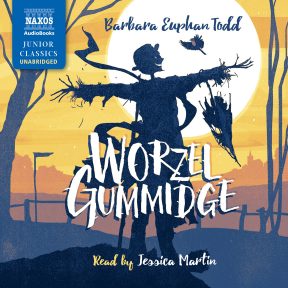 Worzel Gummidge is one of those characters in children’s fiction who is probably better known through his manifestation on the screen than from the original books. For a while it seemed that the character would never see the light of day, the first novel having been consigned by its author Barbara Euphan Todd to a drawer for several years after its rejection by several publishers. However, Todd went on to contribute stories to the BBC radio programme Children’s Hour and was asked to adapt her scarecrow story for the show. The first broadcast featuring Worzel Gummidge in December 1935 was closely followed by publication of the rejected novel Worzel Gummidge; or, The Scarecrow of Scatterbrook. Interestingly, it was later republished by the children’s imprint Puffin Books, as its very first title.

The character, in fact, led a parallel existence, as while the books were being published, Worzel was also appearing in stories on Children’s Hour and continued appearing on radio up until 1952. In 1979 a new television series appeared, produced by Southern Television and starring Jon Pertwee (who was well known at that point as the third Doctor Who). The scripts were written by the established partnership of Keith Waterhouse and Willis Hall and used some elements of the books, but added several of their own. For example, Aunt Sally is Worzel’s principle love interest in the television series, rather than the austere elderly relative who appears in the books.

Jessica Martin’s readings are very much anchored in the books

Worzel Gummidge is a scarecrow who, as we soon discover through the eyes of two children, John and Susan, is actually alive and kicking. Anthropomorphism is quite commonplace in children’s fiction – Pinocchio being a good example – and these humanised characters often bring a unique perspective on our world and human behaviour. While Pinocchio gets into scrapes through ‘naughtiness’, Worzel Gummidge’s actions come more from a naïveté – and it is often the children who end up in trouble rather than Worzel himself.

The recordings of the Worzel Gummidge books represent a real challenge for the reader for several reasons. Firstly, the shadow of Jon Pertwee towers over anything to do with Worzel. However, reader Jessica Martin adopted her own approach with great success. Her readings are very much anchored in the books which, after all, preceded the television series by almost 50 years. Secondly, there is a wide range of characters (both human and scarecrow), many of whom have West Country accents (Todd wrote part of the first book while on holiday in Cornwall), which have to be distinguishable from each other on an audio recording where the characters are invisible except in our own imaginations.

The icing on the cake for us was the specially commissioned cover artwork, which was created by Stuart Manning, who probably knows more about Worzel Gummidge than anyone else on the planet and is the author of The Worzel Book. All in all, this is a delightful series of recordings which, as is often with children’s fiction, will appeal to all ages… ‘Ooh, aye.’