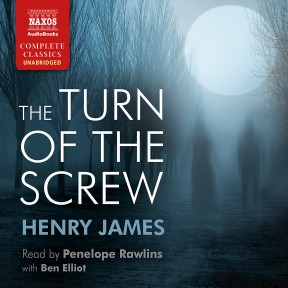 The Turn of the Screw is probably Henry James’s best-known work. A ghost story set in an Essex country house, it has been the subject of numerous film and television adaptations and, of course, Benjamin Britten’s opera. It is as disturbing today as it must have been when it was first published.

The structure of the narrative is itself worthy of mention. A group of friends are sitting around a fire on Christmas Eve listening to ghost stories, the last one of which has involved a boy (‘the child gives the effect another turn of the screw’). One of the group – Douglas – announces that he has a story involving not one but two children, contained in a manuscript handed over to him by his sister’s dead governess. Douglas begins to read from the manuscript, and it is at this point in our new recording that we hear the voice of Penelope Rawlins as the Governess.

There has been much analysis of the character of the Governess since the novel first appeared in 1898, particularly in respect of her state of mind in her stressful circumstances. She accepts a position that others have rejected, agreeing not to contact the children’s uncle and guardian, thus taking on herself the role of protector of the children. This protection is chiefly from two things: most obviously, harm or even death, but also from sexual knowledge. Yet her behaviour is not wholly rational. Pretty much isolated and herself young and naïve, she adds to her responsibilities, particularly by keeping Miles at the house (rather than sending him back to school) and, when she sees the ghosts, by attempting to shield the children herself.

The unreliability of the Governess as a narrator has led readers to doubt whether the ghosts actually exist – an ambiguity which James himself did nothing to repudiate. Searching for a definitive answer seems somewhat futile – this is, after all, a work of fiction. There is an additional layer of ambiguity as the Governess’s efforts to protect the children can be seen as coming from her own repression and naïveté and, ultimately, causing more damage than good.

What makes the novel particularly chilling, as Douglas suggests in the preface, is the involvement of two young children in the story and particularly the corruption of Miles by Peter Quint, both alive and dead. As the title of the book suggests, the plot intensifies by gradual turns until it reaches its tragic conclusion.

Our recording of The Turn of the Screw marks the beginning of a new series of unabridged recordings of Henry James novels which we hope you will enjoy as they are published.