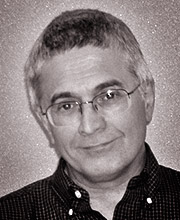 Maurice West was born in Croydon, attended John Ruskin Grammar School and won an Open Scholarship to Cambridge University where he read English. After graduating, he toyed with the idea of becoming an actor and even gained a place at the London Academy of Music & Dramatic Art. But unable to secure another grant, and wary of the precarious nature of the acting profession, he eventually found himself involved with local amateur theatre. For most of his adult life he has taught English to foreign students. His first recording for Naxos AudioBooks was Fielding’s Tom Jones the prize for winning the Voice of the Year competition organised by Naxos AudioBooks and The Times.

Titles read by Maurice West
The History of Tom Jones, A Foundling (abridged)