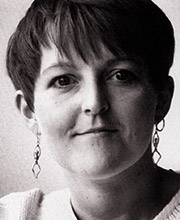 Jane Whittenshaw trained at Guildhall School of Music and Drama. She has worked for the RSC touring the USA in The Life and Adventures of Nicholas Nickleby and has also worked extensively in radio drama for the BBC. Her television credits include Eastenders, Silent Witness, Peak Practice, and Kiss Me Kate.