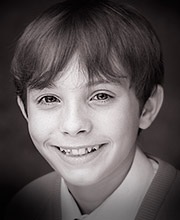 Louis Williams was born in Hokeido, Japan and moved to England when he was five. He became interested in acting when he was seven, when he was cast as the Gingerbread Man in the school play. When he was eleven he joined a local theatre group and appeared in many shows, including Jack and the Beanstalk, The Sound of Music, The Railway Children, Bugsy Malone, Dream Nights and Material Girls. In 2006 he won a place at the Sylvia Young Theatre School in London. Since then his credits include The X Factor, The Royal Variety Performance, various BBC Radio dramas, and A Voyage Around My Father with Derek Jacobi at the Wyndhams Theatre, London.