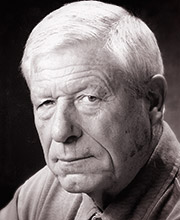 John Woodvine’s varied theatre work ranges from King Philip in Don Carlos (RSC) to An Enemy of the People (RNT). Among his many Shakespearean roles have been Shylock, Prospero, Claudius, Falstaff, Malvolio and Jacques. Films include Fatherland, Dragon World, The Trial, Wuthering Heights and An American Werewolf in London. Shakespeare has featured in his television career along with many popular series including Peak Practice and Dr Finlay.