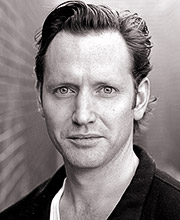 Rufus Wright has appeared in many West End productions, including Journey’s End and the Donmar Warehouse productions of Mary Stuart and Frost/Nixon. His film appearances include Quantum of Solace and he has worked extensively on TV, in comedies such as The Thick of It and Extras, and in many plays and readings on BBC Radio.