A Quarter of a Millennium

‘I wish either my father or my mother, or indeed both of them, as they were in duty both equally bound to it, had minded what they were about when they begot me.’

These are the opening lines of one of the greatest of comic novels: Tristram Shandy.

The autumn is falling upon the 250th anniversary of its first publication, so it was high time that I went up to Shandy Hall in the exquisite North Yorkshire village of Coxwold to meet its curator, the enthusiastic Shandean Patrick Wildgust.

The visit to the home of the Revd. Laurence Sterne was considerably overdue.

After all, it was Patrick who, demonstrating due care and diligence, listened to the penultimate edit of Anton Lesser’s amazingly energetic and imaginative unabridged recording of the aforesaid Tristram Shandy, and pointed small things that had slipped through the net.

What would English literature do without people like Patrick!

A number of people thought that way actually… enough to fill the Coxwold Village Hall to listen to the annual Sterne lecture, given this time by Adam Thirlwell, novelist and critic, who, he revealed, for many years kept a card of the famous Joshua Reynolds portrait of Sterne on his writing desk. A rather special kind of homage for a 21st century writer.

So, there we were, about 60 people from all over the world, varying from Elizabeth David’s biographer Lisa Chaney to Brigitte, an academic and Tristram Shandy devotee, over from Strasbourg, one of quite a number who had travelled from mainland Europe. This is not surprising because, as Thirlwell pointed out, Sterne has always been more widely revered and respected in Germany and France than the UK. I suppose that even after all these years, his whacky life, his whacky writing and his whacky demise (buried three times, reputedly discovered in bits on the anatomist’s table by a friend before finally finding his rightly resting place in the graveyard of St Michael’s Church, Coxwold proved a bit too much for the straight-laced English. Goethe loved Tristram Shandy. So did Stendhal and so did James Joyce. (Of course… without Tristram Shandy there could have been no Ulysses and certainly no Finnegans Wake). 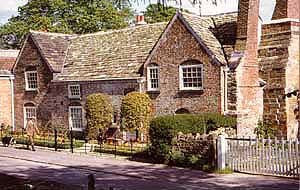 Talking of James Joyce, I drove up to Coxwold from the Naxos AudioBooks office in Welwyn, via York to have lunch with Roger Marsh, who directed all our James Joyce recordings… and discovered that, in his role as Professor of Music at York University, he is instituting a special Tristram Shandy project this autumn with his students…

Adam Thirlwell’s lecture was learned and absorbing. He talked about the nature of Hobby-Horses (maybe, he pondered, what were called Hobby-Horses in the 18th century are called neuroses in our day); and commented that in Tristram Shandy, “all characters are mad, all are sane and all have Hobby-Horses.”

He added that not only is TS one of the greatest comic novels, but it is also ‘the dirtiest novel in world literature’, with more veiled references to intimacies than have yet been noted…

Anyway. after the lecture, we walked back to Shandy Hall for a late supper and wine in Sterne’s dining room, with the wonderful painting of Widow Wadman encouraging Uncle Toby to looking in her eye in full view… and a host of other memorabilia. And Anton’s CD box much in evidence.

Favourite passages flowed through the conversation, and admiration by the bucket load – especially the remembering the abundant humanity of the novel, where every character, even Dr. Slop, is painted with a smile.

My wife and I retired to the Fauconberg Arms, a delightful hostelry in the main street, just yards from Shandy Hall, and emerged early the following morning to visit the churchyard. There, nestling against the church wall, is the new gravestone, with the black page 73, under which are reputedly the head and a limb of Sterne.

And in the porch, the original gravestone erected by two masons in St George’s, Hanover Square. They didn’t know Sterne (who died in London) but admired him and loved his work and wanted to remember him. Carved into the stone, and mainly readable, it says:

Ah! Molliter ossa quiescant
If a sonnd head, warm heart, and breast humane,
Unsullied worth, and soul without a stain;
If mental pow’rs could ever justly claim
The well won tribute of immortal fame,
STERNE was THE MAN, who with gigantic stride
Mow’d down luxuriant follies far and wide.
Yet what, though keenest knowledge of mankind
Unseal’d to him the springs that move the mind;
What did it cost him? Ridicul’d, abus’d,
By fools insulted, and by prudes accus’d.
In his, mild reader, view thy future state,
Like him, despise, what twere a sin to hate.

This monumental stone was erected to the memory of the
deceased by two BROTHER MASONS, for although
He did not live to be a Member of their SOCIETY,
yet all his incomparable Performances evidently prove
him to have acted by Rule and Square; they rejoice
in this opportunity of perpetuating his high and
irrepressible Character to after Ages.

If you have read and loved Tristram Shandy, I urge you to listen to Anton Lesser’s glorious reading of it. If you have heard Anton’s reading, it won’t need much urging to get you to read the book and book a visit to Coxwold. If you go there soon, you can see a remarkable exhibition in building adjoining Shandy Hall. Leading artists, writers and composers, including Patrick Hughes, Tom Phillips, Harrison Birtwistle, Michael Nyman and many others have contributed to an exhibition, the theme of which is simple: illustrate the Black Page, Page 73.

The wittily varied results can be seen – mostly anonymously – though few will forget the 3D visual sleight of hand by Patrick Hughes.

So, a public thank you to Patrick Wildgust, who looks after the house, the gardens, and the literary legacy of Laurence Sterne with a bold energy and imagination. ‘Nothing is so perfectly amusing as a total change of ideas.’

I leave you with one of my favourite lines (curiously, one also chosen by Adam Thirlwell to quote)

‘A man’s body and his mind, with the utmost reverence to both I speak it, are exactly like a jerkin, and a jerkin’s lining; – rumple the one, – you rumple the other.’