Across Hill and Down Dale – Poetry in Motion.

Literary festivals are extremely enjoyable for book lovers. Hundreds or thousands of like-minded people gather in a pleasant town to be informed and entertained, as they are offered the chance to see writers, these often very private specimens of humanity, in the flesh.

They hear them speak and they hear them read from their latest work – because after all this is about promotion and marketing and PR and all those commercially active words. They even hear them discuss characters, character development, research, covers and editors (a breed much loved and much hated in equal measure). Even typefaces might be discussed.

A bit of controversy is welcome, of course. So, if a writer fulminates on a colleague, or is unmasked for putting up on Amazon an atrocious review for a rival or a brilliant one for a work of his/her own (under a pseudonym of course), it is all the more fun.

These hour-long presentations can actually be disappointing, because writers are frequently found to be solitary types whose talents flower best under enclosed, separated conditions. Even those who profess to write in Starbucks – being all at once alone, with others, and charged by caffeine – are hermits by nature.

For an hour, he read poem after poem and kept the packed audience clapping and attentive

So when they stand in front of a crowd they can be less than communicative, or even rather colourless, and the reading of the lively and inventive prose they have produced emerges damp and lifeless. They simply can’t act!

Can you see where I am going? You would think that audiobooks would be a natural for the Literary Festival. I know how brilliant professional readers are – I encounter them every day of my working life and most off-days as well, either live in the studio or at one step removed in my headphones while in the gym or on the train, or out walking. Sometimes even, sitting at home by the fireside, pondering on Proust with my pipe in my mouth, my dog on the carpet and my wife at my side the way we used to listen to the wireless in the 1940s. Well, not really – though since that image just popped in my head a moment ago I am now determined to try it out. Tonight. Maybe they knew something we don’t!

Well, as anyone who frequents Hay-on-Wye, Edinburgh, Oxford, Cheltenham, Chipping Campden or the myriad festivals elsewhere, you rarely encounter an audiobook programme at a Lit Fest. It is counter-intuitive, because if you want an entrancing reading or live presentation of a book, the professionals do it best – or certainly add something that most authors (John Le Carré excepting) simply can’t do.

Now, I must say that we have had some DELIGHTFUL times at some of these. A few years ago, John Carey, the Oxford professor, Milton specialist and The Sunday Times reviewer did an absorbing presentation of Paradise Lost based on our recording – but with Anton Lesser reading live. (The presentation is available on our Podcasts page, or you can download the MP3 directly.

And the composer and academic Roger Marsh, who is our Joyce specialist, did an equally involving presentation on James Joyce’s women, with Marcella Riordan (she of Molly’s Soliloquy fame) reading live. In fact, we have loads of talks from various venues available on our Podcasts page. 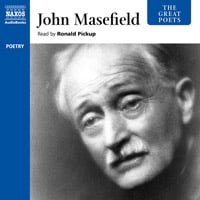 I was reminded of all this because last month we gave a presentation at the Ledbury Poetry Festival, which was hugely entertaining, and it made me think again that every Lit Fest should have an audiobook presentation.

This one was based on our new recording of poetry by John Masefield read by the inimitable Ronald Pickup. Now to tell the truth, some specialist audiobook readers can be like writers: they give their best when closeted in a tiny studio where they can be happily alone. Out pours their talent for bringing to life a multi-character novel or a massive span of history for the medium of one microphone, and by proxy a million people out there. Faced with an audience consisting of live people staring upwards, and they can become like a rabbit in the headlights. I have sometimes thought that the best thing in this case is to have them stand in front of the crowd and play the recording. You get the best of both worlds.

But not Ronald Pickup. What a star! What charisma! For an hour, he read poem after poem – yes, including Sea Fever – and kept the packed audience clapping and attentive. He was helped by Philip Errington, the archivist for the John Masefield Society, who put the programme together and introduced every poem with a short but extremely helpful note. It had the double effect of providing a break from verse – and you need it – and setting the scene. The two of them sat on the stage in the village hall, taking turns at the lectern. Poetry and prose.

It was an absorbing hour. John Masefield was immensely popular during his lifetime and, like Kipling, is emerging, I hope, from being squashed by modernism and a fashionable rejection of poetry that speaks to people.

Philip pointed out that the Naxos AudioBooks recording was the first dedicated to Masefield alone since the poet himself recorded a disc in the 1950s. That is really shocking. 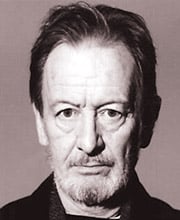 Ronald gave a performance which was very similar to his readings, though of course it was LIVE with new nuances. And it had an unplanned caesura which no one there on that hot day in the Malvern Hills will forget. Coming right to the end of a masterful (by necessity abridged) reading of Reynard, a Masefield masterpiece, Ronald turned over the penultimate page on the lectern, to find that the last page, with the last line – THE CLIMAX! – was missing. Ronald had left it on the table behind him!

Gasp! No one breathed. No one blinked. But with a magnificent sweeping gesture of his hand, Ronald Pickup held the audience in suspense. Yes. He really did, like Leonard Bernstein in one of his totally unbelievable rubatos. He held us in mid-air and turned to the table. Philip, a really on-the-ball man, had already begun to grasp the errant sheet; he shot it into Ron’s hand (we can all call him Ron now, because this has brought him into our personal sphere of friendship) with the assuredness of a No. 3 runner in the relay handing on the baton; Ron turned back to the lectern, paused for another moment (only a great actor knows how to do that) and delivered the line.

BRILLIANT! Resolution. Conclusion. We were there, experiencing the plight of the fox, poor Reynard. That is live performance. We who were there will never forget it.

And if you want to know what happens to Reynard, you will have to go and buy a volume of John Masefield. Or listen to the Naxos AudioBooks unabridged recording of Reynard the Fox. Because, as sure as eggs are eggs, we will do it. If only to commemorate that great day.

P.S. – Neville Jason, Dr Cynthia Gamble (the Proust expert) and myself will be appearing at the Cheltenham Literary Festival on 10, 11 & 12 October to present three different programmes on Marcel Proust.