Inferno in the 21st Century 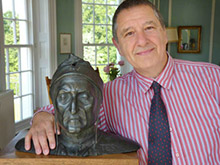 The sales of Dan Brown’s Inferno have been huge: more than 250,000 hardbacks sold in the UK in the first two weeks and nearly half a million in the US. So far, so predictable. And so are the reviews: lofty, superior and patronising on the whole from the broadsheets. Most of my literati friends have responded in similar ways.

When I said I was listening to the audiobook – 18 hours, solidly read by Paul Michael – in the gym, most of my friends were astounded. Aghast, even. ‘What!’ This is partly because they know that I generally inhabit the upper echelons of literature in my daily work with Naxos AudioBooks: if it is not Trollope it is Nietzsche or Virginia Woolf, though I never hide the fact that I have been through most of John Grisham and Bernard Cornwell in the gym. In fact, I salute their contribution in streamlining my shape of late.

But Dan Brown? For some reason, the aforesaid literati reserve a low level of Maleboge for this writer, perhaps for his unashamed commerciality in terms of subject, plot, culture, religion and place.

I was particularly interested in Inferno, of course, because I regard Heathcote Williams’s recording of Benedict Flynn’s translation of The Divine Comedy as one of the pillars of Naxos AudioBooks. It is clear, atmospheric, exciting and, frankly, gripping – though it must be admitted that the higher up Purgatory and Paradise one gets, the more demanding it becomes.

A couple of months ago, I noted that the Brown novel was coming out, and that if you hadn’t read or listened to Dante, now was your chance: get it under your belt so you are prepared. I got a fair amount of stick for that – suggesting that one ‘prepares’ for Dan Brown by reading Dante! I do rather see the point, but c’mon, any prompt to read Dante for the first time – even just Inferno – is OK!

Well, 18 hours later (with quite a few calories burned off on the cross-trainer and a walk past trulli in Puglia on a short Italian break), I can say that if you didn’t listen to our Dante beforehand, I hope you will be persuaded to attend to that after Mr Brown.

The book is actually quite a good, if often improbable, tale – a chase through a succession of top tourist sites (Florence, Venice, Istanbul) with passages (yes, purple) describing all the top sites. I did begin to wonder if the Italian Tourist Authority had paid for product placement, but it doesn’t hurt to be reminded of the Vasari Corridor, the provenance of the Baptistry of San Giovanni, the horses of St Mark’s, Venice, or the amazing sight of Hagia Sophia.

And underpinning it all is Dante. For all Brown’s fairly crude plundering of story, symbol and purpose of the 14th century original, one does begin to develop a yearning to go back, or, I imagine, visit this truly extraordinary vision for the first time. The most famous lines appear in Brown’s novel, unsurprisingly – even in Italian, if my memory serves me:

And I can’t blame him. They pack an incredible punch – curiously, even more powerful when you have read it and started again than when one is setting out on the journey for the first time.

The bottom line is: it doesn’t matter if you read Dante first and Dan Brown second, or vice versa. But read or listen (or do both simultaneously) to Benedict Flynn’s admirably accessible translation of the poem. In addition to the audiobook recording (go on, flick over to our Inferno page and listen to Heathcote Williams read the opening!) it is also available on Kindle for £2.56. One can also purchase the iBook from the Apple store for £3.49. The CD and the download, and the kindle version, contain many helpful notes that explain references and background, as well as classical, religious and historical allusions.

As you will have seen elsewhere, this month sees the introduction of our new download service: all our recordings are available in the dedicated audiobook format M4B. We have an introduction to the benefits and usage of the format above MP3 – though that still serves us well. Please experiment with the free downloads; I hope they encourage you to listen to more Naxos AudioBooks titles, starting, even, with Inferno by Dante Alighieri!