The scene: an audiobook studio in London, New York, anywhere in the world. Piles of paper scripts everywhere. New ones, used ones, ones in the process of being edited. In the days of abridgements, the piles were numerous but small. Then, as digital unabridged recordings began to dominate, there were the same number of piles, but they were huge!

The postage, the envelopes, the couriers. The recipients waiting in for parcels which won’t go through the letter boxes. The mislaid deliveries.

All those trees. Then, all those trips to the recycling centres. The ink.

The printer/photocopier going at full steam, seemingly, for days. The noise.

Generally, actors put two pages up on the lectern. Some manage three, but the danger is the voice starts to sound differently as the head moves unconsciously from left to right across the microphone spectrum. Ah!

And of course for every change of page, the editor has to make an edit. That’s 1,000 extra edits on big novels – and by golly, some of those 19th-century novelists were voluble. 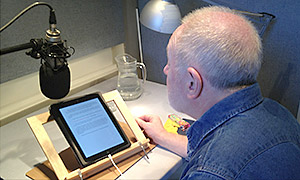 But, pop into the Naxos AudioBooks studio these days (and many others it must be said) and things look very different. Here, for example, is David Shaw-Parker reading Trollope. The first volume, The Warden, was released in April and more from the Barsetshire Chronicles will come next year.

There, on the lectern, is his iPad. A wonderfully fluent yet characterful reader, David is enjoying Trollope seamlessly. He has prepared the novel using a nifty app called iAnnotate, which allows actors to mark the ‘script’ with little memos to himself of pronunciation, stress, voice etc. He reads away, and as he gets to the bottom of the screen, out comes his index finger and he flicks the script upwards, and Trollope continues without a fragment of interference.

Meanwhile, in the control room, our producer Pippa Vaughan is sitting there with her headphones on, following the script on her PC. She is ready to make a mark for the editor when there is an occasional retake, or a slight creak of a chair, or when David pauses for a moment’s reflection.

There isn’t a piece of paper in sight.

Many of our readers and producers now work in this way and find it far easier as it enables them to concentrate more easily upon literature and performance. We expect this now from the younger readers of course – there is no excuse here! But our veteran readers also have taken to the new technology like a duck to water. Sometimes there is an initial resistance, but once they try it they are totally persuaded.

There are times when it is not possible to work this way. Perhaps we can’t get an electronic text or one that can be annotated. We can’t be totally draconian about it. When I discovered that one reader declined to use the iPad and insisted on sticking with paper, I did consider, for a moment, whether to re-cast. But Pippa said that talent must come before technology, and I suppose it must.

The trouble is that these new ways are not only so much more efficient, but they are also so much FUN!

Well, at least for a Gadget Man like me.

And you’ve gotta believe me guv: you DO get a better recording.