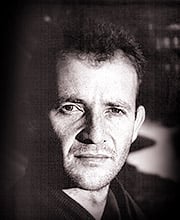 The classical English actor Anton Lesser has been one of the mainstays of the Naxos AudioBooks catalogue for nearly two decades – ever since his first recording for us (and one of our very first), the abridged version of Paradise Lost.

His distinctive voice, and his intelligent but moving delivery, set a tone for subsequent recordings that enabled us to develop a reputation for outstanding classics – something that has remained with us ever since, despite the growing competition.

In the intervening years, he has appeared on 49 recordings, ranging from the unabridged Paradise Lost, 15 Dickens titles (some abridged, some unabridged), children’s stories, plays (he took the title role in Hamlet, our first full drama recording), Homer, Hardy and much else.

One of my personal favourites is the spectacular unabridged recording of Tristram Shandy by Laurence Sterne – a writer whose 400th birthday is being celebrated this year. Anton is particularly known for his remarkable range as a reader, comfortably encompassing the epic poetry of Milton, the rollicking humour of Dickens, and the darker colours of Thomas Hardy. But rarely has he been more entertaining than in the 19 hours of Tristram Shandy.

We haven’t had a new recording from him for some time for a variety of reasons, one being that he has been busy in television – he can currently be seen in the successful UK series Endeavour, a prequel to the Morse detective stories. Anton plays Inspector Reginald Bright, Police Chief Superintendent of Oxford City Police.

But we are delighted to welcome him back this month – and reading poetry, a literary medium where he feels very much at home. Next year marks the centenary of World War I, of course, and Anton reads The War Poetry of Wilfred Owen, a collection of work by the writer who is perhaps most closely associated with that terrible conflagration.

Here are all the major poems – Strange Meeting, Anthem for Doomed Youth, Dulce et Decorum est – and many others (including some earlier, little-known poems) that Owen wrote during the course of the war and up to the time of his death in the last days before the Armistice in 1918.

‘I knew many of the poems of course, but going back to them to prepare for a recording brought them alive again for me,’ said Anton. ‘And then there is the experience of sitting alone in a quiet studio and reading them aloud. The power of the words, the depth of feeling that emerges from that live experience, are not things one simply shakes off at the end of the day.’

Doubtlessly, there will be many books, films and recordings that come out to coincide with the centenary, but this slim volume, one CD of Wilfred Owen read by Anton Lesser, may be one of the most powerful and poignant.