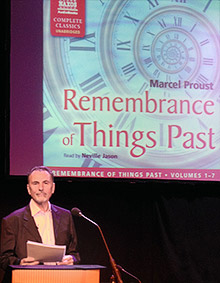 Of course, it was extremely bold of the Cheltenham Literature Festival to aim to evoke The Belle Epoque in a town so quintessentially English. But over three days a series of events took us deep into the often surprising world of Marcel Proust; and with a variety of readings, lectures, discussions and entrancing illustrations, we found the immersion captivating.

Naxos AudioBooks played a prominent role, as I explained in my previous blog, with our Proust reader Neville Jason reading at three hour-long sessions dubbed by the Festival Pocket Proust. He started with The Proustian Moment, during which he introduced and read key passages (including the famous madeleine moment) and characters. He displayed his usual mesmerising skill.

Pocket Proust 2 was presented by Ruskin and Proust scholar Cynthia Gamble, who set the Proustian scene in a talk entitled The Belle Epoque. She was joined by Neville who read selected passages and comments and letters; but equally absorbing were the numerous illustrations: photographs, posters, paintings of town and country, the dresses, the highlife and the personalities which brought fin de siècle Paris to life. What an amazing time it must have been, sullied though it was by events such as the Dreyfus case, by excesses of numerous kinds, and brought to an abrupt halt by the horrors of World War I.

Dr Gamble made no concessions to the fact that Pocket Proust 3 took place at 10 a.m. In An Extravagant Life, she set out to show that apart from being highly educated, learned, comfortable in high society and an acute observer (as Remembrance of Things Past shows) Proust was also just at home in the darker corners that Paris provided. Here, letters read by Neville revealed a Proust that we don’t quite meet in his magnum opus: very personal letters that Proust wrote to men he fell in love with, or grand ladies whom he admired with equal (though different) intensity. Very vivid, especially as often as we listened to the letters we could see, on screen, the objects of his attentions!

The Festival interspersed these talks with related events which were equally fascinating. In Celebrating Proust Dr Gamble joined Jacqueline Rose (author of Albertine a novel looking at the love affair with Marcel from her point of view) and Lisa Appignanesi, in a wide-ranging discussion covering Dreyfus, love and much more.

And then there was The Proust Phenomenon in which a philosopher, a psycholinguist and a psychologist who specialised in food and taste discussed the madeleine moment, and our responses to memory evoked by stimuli.

There was even a recreation of a Belle Epoque salon!

If you think that might all sound a bit precious – it wasn’t. Proust can take the high and the low – sharp intellects cheek by jowl with society dresses, bottles of champagne, and buckets of desire and emotion.

And as remarkable as anything were the fluent, expressive readings by Neville, who let those endless Proustian sentences flow like waves on a swell across the ocean, page after page without sight of even a semi-colon, until, almost without warning, they bubble down into the final cadence, the sea quietly expending its energy on the sand. But then anyone who has listened to the recordings knows all about that.