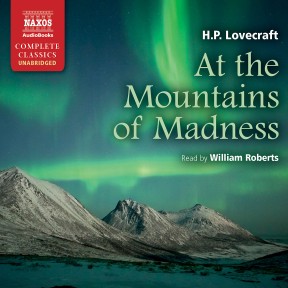 At the Mountains of Madness

At the Mountains of Madness first appeared in 1936, in the February, March and April editions of the American magazine Astounding Stories. One of H.P. Lovecraft’s most chilling works, it draws on Edgar Allan Poe’s Narrative of Arthur Gordon Pym, as well as Lovecraft’s deep fascination with the Antarctic. The sinister discoveries made by a group of explorers in At the Mountains of Madness are testament to the author’s enormous powers of imagination.

A certain atmosphere of breathless and unexplainable dread of outer, unknown forces must be present; and there must be a hint, expressed with a seriousness and portentousness becoming its subject, of that most terrible conception of the human brain – a malign and particular suspension or defeat of those fixed laws of Nature which are our only safeguard against the assaults of chaos and the daemons of unplumbed space.

So wrote Howard Phillips Lovecraft of what was to be expected of his best work, at the same time showing us why he is regarded as a figure of such significance in the fields of science fiction, horror fiction, fantasy and weird fiction. Leaving the odious business of literary sub- genres aside, Lovecraft is an enormously

influential writer, a fact that would have astonished him during his lifetime, since for most of it he was almost completely unknown.

Lovecraft was a disturbed and damaged man. His father died when he was just five, after years in a mental institution, the collapse of his sanity perhaps brought on by neurosyphilis. The young Lovecraft went on to develop an unhealthily close relationship with his over-protective mother, who grew his hair long and dressed him as a girl. His mother was profoundly uncomfortable with the idea of physical intimacy, and made her son so aware of what she considered his physical shortcomings that it affected his relationships (such as they were) with all women, except his ever-present aunts. The maternal relationship almost permanently suffocated him until his mother died, admitted to the same mental institution as her husband, when Lovecraft was 31. He suffered all his life from night terrors, a condition in which the sufferer is suspended between wakefulness and sleep in a state of panicked alarm and cannot be awoken. It is perhaps not surprising that he himself had at least one nervous breakdown and, despite a brief marriage and stay in New York, lived most of his life with his aunts in the relative seclusion of Providence, Rhode Island. Here his innate conservatism, intellectual pursuits and largely unsuccessful literary work could be pursued with little interference.

By the time he
felt he had to
have treatment,
the intestinal
cancer was too
entrenched and
it was too late

His literature is deeply influenced by his understanding of old civilisations, astronomy and science. He was an extremely gifted child, affected deeply by the loss of his father. His family was well-off, thanks to the help of Lovecraft’s grandfather, the wonderfully named Whipple Van Buren Phillips, and had claims to aristocratic links, with Lovecraft himself being deeply anglophilic. This grandfather, quite apart from standing in loco paterfamilias, encouraged his grandson’s considerable reading ability, and introduced him to some of the most formative works of Lovecraft’s life: the Arabian Nights, Grimms’ Fairy Tales and his own invented Gothic stories. Lovecraft developed his passion for reading, discovering Greek mythology as well as the sciences. His personal reading was not a result of his experiences at school, which were perfectly happy, but was explored during his frequent illnesses or on the occasions that his mother kept him out of school.

After Lovecraft’s grandfather’s death in 1904, the family suddenly found itself in very reduced circumstances, something Lovecraft would have to get used to over the years. The shock of losing his home and birthplace upset the extraordinarily sensitive and psychologically scarred young man so much that he considered suicide. Four years later, he suffered a nervous breakdown. But the imaginative world was to provide a panacea for the all-too-indigestible real one. It all started with a complaint to a story magazine, written in verse, which stirred up an angry conversation in the letters pages. The President of the United Amateur Press Association spotted this, and Lovecraft was offered the chance to exercise his evident skills outside the hermetic existence he had been living. It was effectively a reprieve. He began to write: reviews, stories and ghost writing for others (including Harry Houdini at one point); as well as getting to know a wider circle of friends, with whom he would correspond at great length for the rest of his life.

His mother’s health deteriorated, and she was hospitalised in 1919 before dying two years later. Three years after that, Lovecraft was married. It’s a matter of debate as to whether the fact he married at all is any more surprising than that he married a Ukrainian Jew. Given the terrible repressions of his childhood, marriage itself might have seemed unlikely; and given his elitist, snobbish and racist nature, choosing a shop-owning Jewess made it even less likely. As a husband, he was ‘entirely adequate sexually’ according to his wife, Sonia Greene; but his move to New York to live with her put him at the centre of a world he could scarcely have comprehended. He had always been secluded, retreating, suppressed. New York was a kind of living symbol of the decadence of mankind writ large and very loud. There was also practically no money. Sonia’s business had failed (she herself suffered a breakdown because of the financial worries) and Lovecraft’s literary work was hardly earning anything. He determined to go home. But there the disparity between their social positions became all too clear. The aunts told Sonia that they (and Lovecraft) would not accept her working to support them. Snubbed and unable to find succour or a means of support from her husband, she left. The marriage was over.

However, something started in Lovecraft’s imagination. Although some of the stories he had written before had been well-received, he had felt he was searching for his own voice – now he started to find it. The Call of Cthulhu was written between the end of 1926 and 1927, and the next few years saw the best of his work and the highest sum he was ever paid for an individual piece ($240). But this paradoxical man seemed constitutionally incapable of recognising good fortune, or grasping it when it occurred. Perhaps he was so beset by complexities that it never seemed like good fortune. He was troubled by money worries and tragedies until he died, and was equally incapable of recognising the fact that he needed to work for money – it seemed distasteful to him. But when his stories stopped selling, one of his aunts died and a close correspondent committed suicide, his health, always a frighteningly delicate matter, was eventually troubled by something much more mortal than debilitating nervous disorders. By the time he felt he had to have treatment, the intestinal cancer was too entrenched and it was too late. He died five days after being admitted to hospital; once again proving he was more damaged than he had thought.

At the Mountains of Madness was written in 1931, and the length of it – a novella – prevented publication in Weird Tales. Instead, it first appeared in 1936 in the February, March and April editions of Astounding Stories.

The story grew out of Lovecraft’s long- standing interest in the Antarctic, (despite the writer’s acute sensitivity to cold!) partly perhaps because it was largely unexplored and therefore an area where his imagination could work. Literary critics have suggested a number of sources which may have led to the basic plot, varying from scientific explorations (suggesting that the frozen region had a tropical past) to the literary forbears, including Poe (The Narrative of Gordon Pym of Nantucket concludes in the Antarctic) and Edgar Rice Burroughs. For some of his visual images, Lovecraft drew upon the illustrations of Gustave Doré.

The Mountains of Madness is widely regarded as one of Lovecraft’s most successful and enduring works.