Behind the Microphone – a View From the Studio

The Guardian recently published an insightful article on the (occasional) trials and tribulations of recording an audiobook. 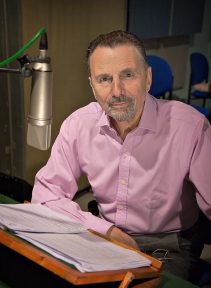 Neville Jason, in the studio for Naxos AudioBooks

It made the point that recording an audiobook can be a pretty lonely experience: the reader is incarcerated in a booth with only a book (or, more commonly these days, an iPad), microphone and reading light for company. And, in most cases, they are then asked to read – and keep on reading – until they hear the interruption of the producer’s voice, which means a mistake has been made (a mispronunciation, wrong word or wrong word order, wrong accent and so on). In addition the reader has to remain pretty still – the rustling of clothing or squeak of a chair will be picked up by the microphone. For a stage actor this is all rather strange: the voice is doing all the work, and movement, a crucial component of the stage actor’s armoury, is effectively disabled.

From this it follows that even the most celebrated stage actor may not be a natural audiobook reader. The Guardian cited the example of Dame Judi Dench, whose daughter Finty Williams said: ‘The only audiobook she ever did she had to leave after the first day, because she couldn’t string two sentences together,’ says Williams. ‘It’s about the only thing she can’t do.’ Clare Corbett, who has read about 300 audiobooks including several for Naxos AudioBooks, added: ‘If you’re a good actor it doesn’t always mean you’re going to be a good narrator.’

The key is in the preparation and, inevitably, some actors are more prepared than others. In some works of fiction – Dickens being a good example – there may be 100 or more characters and each needs a distinct voice with distinguishing accent and colour (different readers have different methods of marking the script, whether it be colour-coding or just annotation).

In some cases, the author may be quite specific about accents – say, with Samuel Weller in The Pickwick Papers – while, more often, it is left to the reader to create the character. This is one area where a producer (who acts as a second, and both knowledgeable and friendly, pair of ears) is a vital support and guide to the narrator.

As an audiobook publisher, one of our most important tasks is matching what we think is the right voice to the books we have decided to record.

Recent research has shown that the ‘wrong voice’ is the single biggest factor in putting consumers off listening to a given audiobook. A good narrator, on the other hand, can not only provide listeners much pleasure, but also lead them to audiobooks by other authors. As consumption of spoken word continues to grow and more books are recorded, there are likely to be more actors who specialise in reading books. In the background, there are advances in AI technology which mean that audiobooks will not necessarily require a human to record them. This is not an option that Naxos AudioBooks will deploy. However, it is likely to become part of the future spoken word landscape.