Behind the Scenes at Naxos AudioBooks 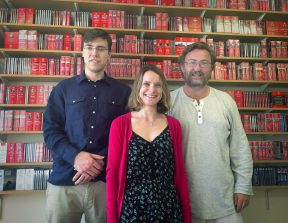 One of the more gratifying things about my job is that quite a lot of acquaintances express a genuine interest in what we are recording and releasing and I am often asked how we actually go about producing our audiobooks. Without giving away too many trade secrets, here are a few insights into how we go about this.

How do you decide what books to record?

The Naxos AudioBooks production team meets once a year to determine its basic recording and release plan. This meeting is held over a year before release, though we do make some additions after the basic plan is in place. Given our core of recordings of the classics, the main thrust of our plans remain in that direction. The ideas come from our own knowledge of literature plus some research, in addition to ideas which our listeners send us from time to time (please keep these coming!). We do look at what other versions of books are available, but we are not necessarily put off if there are several other recordings of a given book – particularly if we feel we can bring something new to it. In fact some of our bestselling recordings are of books where there are multiple versions.

The final list will be a combination of fiction and non-fiction (science, philosophy, religion etc.). In addition to texts which are in the public domain, we are always looking out for interesting texts which are still in copyright – ‘modern classics’, if you will.

Don’t you need the author’s permission to record recent books?

Absolutely. The situation is made a little more complicated by the fact that copyright legislation is not harmonised throughout the world. In these cases we will track down the author’s agent and inquire whether the audiobook rights are available (sometimes they are not even though there is no audiobook version on the market). We then negotiate (and hopefully agree) terms – which basically means a royalty which is paid to the author for each copy we sell. This process also applies to in-copyright translations of texts that are out of copyright in the original language.

How do you decide who should read the book?

We have a core of actors who have recorded for Naxos for many years and we will often approach one of these with a particular project. But, in other cases, we will come across a particular voice (through our own general listening or through a recommendation) which we feel is right for a given text. So it is a mixture of new and more established voices.

Many of the texts we record are substantial, so it is no small feat for the actor not only to prepare the text (which often involves a lot of time in deciding on voices for the various characters and the like), but to be able to sustain their voice for many days consecutively while shaping the sentences so that they convey the correct sense to the listener. We are also mindful that the listener will be in the reader’s company for many hours so the voice has to have a certain level of warmth and excitement – at least for most books!

Do you only record books, or do you do plays too?

While we do have quite a few, very good recordings of plays in our catalogue we are generally just recording books nowadays – these are most frequently in single voice readings, but sometimes will be multi-voice if the text demands it – for example, Dracula, which is written in the form of a series of letters penned by different characters. There are one or two projects on which we are currently working which will be semi-dramatised – more complex and expensive to create, but where we felt the books lend themselves obviously (and irresistibly) to such treatment.

Is there much post-production, or can you just release an audiobook after the recording?

Given the length and, quite often, difficulty of much of what we record, it is not surprising that a large amount of time and effort goes into our post-production. We feel that with classics in particular it is important to get a good level of accuracy – this is over and above whether the actor has read well or not.

We have a producer in the studio at the time of recording – that second pair of ears is of great assistance to the reader. But, nevertheless, there are inevitably mistakes (this can be wrong/missing/additional words, wrong pronunciation of words or just wrong emphasis – all of which can be an impediment in conveying the sense of the author’s words to the listener). And obviously the actor is not reading the whole book in one take, so quite a bit of editing is required in post-production – even with a word-perfect reading.

Each recording is edited, and then proofed thoroughly by one of our freelance team before going for a final edit. As quality is so important, retakes are required in quite a few cases – we want to make the finished recording as perfect as possible.

You have recorded so many of the classics, aren’t you running out of books to record?

Not a chance! We have a running ‘longlist’ of recording ideas which seems to grow by the day… So there will still be plenty of releases coming from Naxos AudioBooks over the coming years.