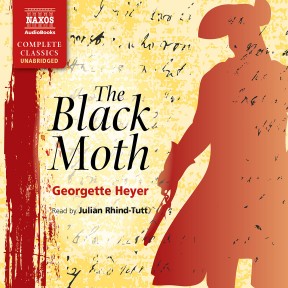 When the dashing Jack Carstares is unfairly accused of cheating at cards, he leaves the country in disgrace. Returning some years later disguised as a highwayman, his reappearance heralds a dramatic chain of events that includes a Duke, a damsel, a duel and not one, but two kidnappings. Written when she was just seventeen, The Black Moth was Heyer’s first novel, but it bears many of the hallmarks of her later romances, being vivid, witty and peppered with historical insight. 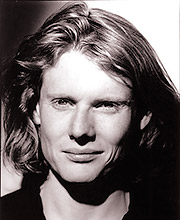 Julian Rhind-Tutt is a prominent British actor, working extensively in television, film, radio, and theatre. He is a familiar face on both British and American television, having had starring roles in cult comedies Green Wing and Keen Eddie, as well as appearing in Marple, Black Books and Oliver Twist. Film credits include The Madness of King George (1994), Notting Hill (1999), Lara Croft: Tomb Raider (2001) and Stardust (2007). In 1992 he received the Carleton Hobbs award, and has since featured in more than fifty radio productions.

Now published for the first time as an audiobook, and written when she was only 19, Georgette Heyer’s The Black Moth is a much more refined recreation of the past. It is, however, rather more raunchy than her later comedies of manners, which she liked to think of as a mix of Dr Johnson and Jane Austen. The narrator Julian Rhind-Tutt enters in with a will on the skulduggery of ‘Devil’ Andover, the pluck of Diana Beauliegh and the gallantry of highwayman Jack Carstares.

Julian Rhind-Tutt is simply superb in his narration of this delightful and charming Regency romance, written in 1921, the first novel by Georgette Heyer, ‘the Queen of Regency Romance’. In this tale, the hero turns highwayman after he takes the blame for his younger brother’s cheating at cards. The handsome hero must save the beautiful lady who helps him when he is wounded when she’s later kidnapped by the dastardly duke, played by Rhind-Tutt to sneering perfection. He easily moves from the commanding voice of the hero to the shrill voices of the hero’s sister-in-law and her friends and positively reeks of snobbery and villainy when portraying the duke. Filled with interesting details of the period combined with an expert narration, this audio offering is captivating.

The Black Moth is set significantly earlier than most of Georgette Heyer’s novels. While most of her books take place during (or just prior to) the Regency era, the events of The Black Moth occur around the middle of the eighteenth century, during the reign of George II. Published in 1921, and written to entertain her sick brother when she was just seventeen, it was Heyer’s first novel. Though there is an occasional roughness and immaturity to it that betrays her inexperience as a writer, it bears many of the hallmarks of her later romances, being dramatic (it features not one, but two kidnappings), witty and peppered with historical insight. It presents a number of soon-to-be-familiar characters, including a beautiful, fiery heroine, a dashingly noble hero and an almost cartoonishly wicked villain (the eponymous Moth).

As with so much of Heyer’s later work, it is possible to date the novel quite precisely through her habit of incorporating real people and events into her narrative. For instance, the real-life sisters Elizabeth and Maria Gunning, celebrated society beauties, appear in The Black Moth as marginal characters. They arrived in London from Ireland in 1750, taking the town by storm. Both sisters, though from relatively humble origins, married into the nobility – Elizabeth in January 1752 to the Duke of Hamilton and Maria in March of the same year to the Earl of Coventry. Lady Lavinia Carstares, the beleaguered hero John’s sister-in-law, makes reference to this when she discloses that ‘’Twill interest you to hear that Miss Gunning is to marry Coventry. ‘Tis all over Town this last Week.’ Her remark puts the story around 1751–52. Heyer’s penchant for weaving together fact and fiction is already much in evidence, even in this early novel, and as with her subsequent books the historical references are integrated so cleanly into the narrative that they pass almost unnoticed – although her knowledge of the period became increasingly extensive, she always wore her erudition lightly. Her command of period vocabulary and spelling (in the characters’ correspondence) is astonishing and conjures up a convincing atmosphere.

Another classic Heyerism reveals itself in the close attention she pays to the fashions of the day. She devotes many pages to a discussion of her characters’ clothing, which becomes an integral part of their identities. Jack Carstares, the male protagonist, sets the mould for so many of his later counterparts by dressing with exquisite taste and grace – coats, shirts, shoes and wigs are described in loving detail. By contrast, the not-so-honourable Hugh Tracey Clare Belmanoir, Duke of Andover (the villain of the piece, naturally) dresses in simple black and silver – hence his designation as the ominous ‘black moth’.

The plot hinges on the revelation that Jack – disgraced six years earlier when he was unfairly accused of cheating at cards – is not, in fact, still living abroad, but has returned to England disguised as a highwayman. The highwayman was both a fiction and a reality in eighteenth-century Britain; mythologised and reviled, admired and feared, highwaymen were a serious problem on the lawless cross-country roads around London. Jack clearly belongs to the (almost entirely apocryphal) tradition of so-called ‘gentlemen robbers’, glamourous aristocratic criminals who supposedly lived by a strict code of chivalry – Heyer is careful to reassure us that he ‘could not bring himself to terrorise women or old men’. Highwaymen appear more than once in Heyer’s work, for instance in The Convenient Marriage, and they also held a powerful fascination for eighteenth-century readers; Thomas de Quincey called them ‘the very noblest specimens of man’, and they were the subject of countless popular biographies, novels and tall tales. In basing The Black Moth around this gallant figure, Heyer adopts some of the tropes and trappings of the eighteenth-century gothic romance.

Born in London in 1902, Heyer inherited a love of books from her father, George Heyer, and two of her closest childhood friends, Carola Oman and Joanna Cannan, with whom she spent many hours discussing literature, both grew up to be authors. Heyer showed promise from an early age, though it was not until 1926 that she had her first major success, with These Old Shades (a kind of sequel to The Black Moth). By this time, she had been married for a year to a young mining engineer named Ronald Rougier and had already published five books.

From 1932 until her death in 1974, Heyer produced novels at the extraordinary rate of almost one a year, spawning a new literary genre – the Regency romance. Yet despite her undeniable success, she was frequently troubled by plagiarism and financial problems. Throughout the fifties and sixties, her company Heron Enterprises was a source of contention between her and the tax authorities, and a large chunk of the profits from books written around this time went towards paying back money to the Treasury. Plagiarism also became a problem – from the 1950s onwards, several other writers traded on her popularity by writing novels using names, phrases and events from her books. She was even accused by some of her fans of publishing substandard work under a pseudonym. Although Heyer sought legal advice on several occasions, she never chose to sue.

The Black Moth, though a product of Heyer’s adolescence, is a remarkably fully-formed work. Despite being somewhat more gothic and melodramatic than her later novels, it sparkles with vitality and humour, and features the same historical colour that would come to distinguish her authorial voice.