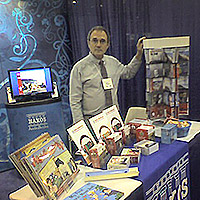 I find book fairs very stimulating things: the gathering together of so many people working in the differing strands of activites which comprise the book industry makes for something extremely colourful, energetic, busy and above all varied.

As I write, I am at Book Expo in the Javits Center, New York. We have a stand here – one of nearly a thousand – but in a section dedicated to independent audiobook companies. Beside us is Recorded Books, opposite us is Blackstone Audiobooks and Brilliance. We are colleagues but competitive colleagues… so we see who is visiting each other’s stand and note…

Actually, the first day was so busy that William Anderson, Naxos AudioBooks US sales director, and I had no time to watch elsewhere… non stop visitors from 9 a.m. through to after 5 p.m.

Now, many stands have little freebies of one kind or another, and William had a bowl of mints packaged in a small box, with covers of Moby-Dick on one side and The Once and Future King on the other. He had to keep the bowl refreshed constantly. Very few people walked past the stand without glancing at the table at this bowl. It didn’t say mints, and many thought it was a tiny MP3 player – but surely not with such massive unabridged recordings!

They picked up the box. They shook it. It rattled. You could see a slight frown of puzzlement appear on their brows.

They did, and then cast their eye along the table. There was David Timson’s 60 CD box set The Complete Sherlock Holmes. Wow! There was The Master and Margarita with Julian Rhind-Tutt reading the new Michael Karpelson translation. Stunning! And our best seller, the unabridged Ulysses – surely one of the most handsome boxes in audio.

And there was the spinner with many of our lead titles… Junior Classics, the new In a Nutshell series, the Young Adult Classics series, etc… 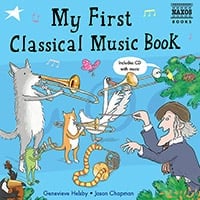 But also, flat on the table, was a traditional book, My First Classical Music Book by Genevieve Helsby, a delightful introduction for 4–8 year olds with engaging drawings by Jason Chapman. Almost without exception, the passers-by picked it up and opened it. Smiled. Some asked boldly if it was a ‘sample’ copy. Meaning free.

Librarians, booksellers, other publishers, foreign rights enquiries from China, Korea, Europe generally… they all were interested, and it is looks as if we have a bit of a best-seller on our hands.

What they didn’t know is that sales are going so well that whenever we had a tiny spare moment, we were surreptitiously on our PDAs (Blackberry for William, Palm Treo for me) trying to speed up replacement supplies from our printers in China. X000 copies to be shipped to Hong Kong and routed across the Pacific to Naxos of America in Franklin, Tennessee, while X000 copies to be shipped direct to Select, the Naxos UK distributor. ASAP pls. We have orders awaiting… Then we were back on the PDAs to the UK to confirm, etc…

This is what fairs like the Book Expo are about. We have meetings studded through the diary during the day – especially important in a country as big as the US, when it is one of the few occasions we can easily see our associates and colleagues without undertaking major travel.

Our Eastern rep group comes – five salesmen and women and William explains some of the key fall titles coming, although the detailed work will happen later. New and existing download service providers (DSPs) come to talk about delivery, promotion, formats. Readers slip their CDs across the table, saying how much they would love to read the classics. Writers too, with 57 varieties of texts, fiction, non-fiction, adult, children.

Then there are the providers of book displays, of marketing services, of cover designers, studios, CD pressing plants. Even the maker of the box in which we put our cool mints happened to pass by!

We stand in the booth, taking on all comers. Behind us, there is a TV screen which sometimes shows videos of Juliet Stevenson or Sean Barrett reading; sometimes rotating covers. Sometimes Tom and Jerry. NO! We would LOVE to have a bit of Tom and Jerry to lighten the load a bit… but there was no chance of that! But this is another facet of these fairs. After three days, you get exhibition fatigue and stress sets in.

Sentence structure goes awry. You get a bit light headed and are in danger of making deals which ought not to be made. Or turning away opportunities that should be pursued. After all, the action doesn’t only take place on the stand. At night, it is much the same, only off-piste. The first night, for example, I was the guest of ever-fizzing Sourcebooks and its founder Dominique Raccah (dubbed one of the top 50 women in publishing, I note), with whom we have done some co-productions. It was an evening full of enterprising ideas. Tip: watch the Sourcebook space for a really interesting poetry project in the summer that I am keen to support.

Then there was a quieter supper, just William and myself with Robin Whitton, founder and editor of AudioFile magazine, the bible of the US audiobook industry. We looked at the past, the present, the future… where we are going with digital, what is going to happen to CD… she urged me to listen to the main winner of the Audies, Neil Gaiman’s The Graveyard Book which the author read himself.

We have people making a special journey across the Javits Center, only to say how much they enjoyed a particular recording – it could be Plato, or Othello with Chiwetel Ejiofor… or King Arthur and the Knights of the Round Table. We graciously accept the praise – after all, that is what WE feel about these recordings… otherwise we wouldn’t make them!

Earlier today, one man and his daughter came across. She was like the girl in Little Miss Sunshine. She dipped into the mints bowl fast. Meanwhile, her father was saying how much he LOVED Naxos, it meant so much to him. It changed his life.

William and I always hold a little back in reserve… we are never sure whether they are going to say they love the audiobooks, or the music. Of course we too are proud of the music and the classical riches in the largest and most varied classical music label in the world. But, c’mon, guys, this is a BOOK show, and we do AUDIOBOOKS, so please don’t say you have never listened to, or have not even heard of, our wonderful audiobooks!

Anyway, this guy was waxing lyrical. Then came the killer blow.

‘There isn’t a Greek island like it for walking in the mountains, and the air, and that little town rising out of the harbour… sooo sweet!’

Time to pack up and go home.