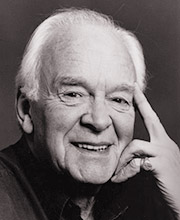 Tony Britton began his long theatre career at the age of eighteen and has since performed all over the country and in the West End, including lead roles in My Fair Lady and Gigi. He has also worked with The Royal Shakespeare Company in Twelfth Night and Henry V. He frequently appears at Chichester both as actor and director. He is also well known for his numerous television credits including Don’t Wait Up.