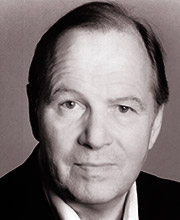 Charles Collingwood’s early years were spent in repertory. His numerous TV credits include Can’t Buy Me Love, White Teeth, Midsomer Murders, Roger Roger, Bob Martin, London’s Burning, Inspector Morse, Nelson’s Column, The Bretts, Inspector Wexford, Outside Edge, The 10%ers, Tonight at 8.30, Trouble In Mind, and My Name Is David Lander. He has been honoured to be the subject of This Is Your Life for the BBC. He has also read the part of the Mad Hatter in Alice in Wonderland for Naxos AudioBooks.