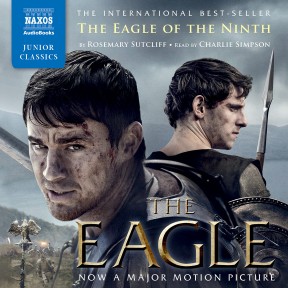 The Eagle of the Ninth

Roman Britain: Marcus Flavius Aquila, a young centurion is forced into retirement after a wound in his first major engagement against a rebel British tribe. It allows him the freedom to embark upon a dangerous mission to find out what happened to the Ninth Legion which, years before, disappeared in the savage lands of the Picts. Will he find out what happened to the men, led by his father, who never returned? And will he recover the Eagle, the symbol of Roman dominance and power? This junior classic has never been out of print since it was first published over fifty years ago. It is now presented in a fresh abridgement read in exciting manner by Charlie Simpson.

Titles by Rosemary Sutcliff
The Eagle of the Ninth (abridged)

Rosemary Sutcliffe’s gripping The Eagle of the Ninth, is about a young centurion’s search for a missing legion over Hadrian’s Wall. Read by Charlie Simpson against a background of thrilling music, and sparkling with detail about the Romans in Britain, it is perfect for boys of eight and over.

In his chapter ‘Pax Romana’, Lacey touches on the lasting legacy of the Romans in Britain which, along with Hadrian’s wall and underfloor heating, included cabbages, apples, roses and the domestic cat. Sometime around AD117, the Ninth Legion, stationed in Eboracum, now York, marched north to put down a Caledonian rising and was never heard of again. Eighteen hundred years later archaeologists at Silchester dug up a wingless Roman eagle, the military emblem carried by the standard-bearer of every Roman legion. While it remained aloft the legion’s honour lived. Sutcliff’s novel is classed as a junior classic, but it’s no less adult than and every bit as entertaining as Bernard Cornwell’s Sharpe series. It follows the fate of the son of the Ninth Legion’s commander as he attempts to solve the mystery of the missing soldiers. Life beyond Hadrian’s wall and the protection of the red-crested legionaries is a dangerous place. Sutcliff evokes a dark, threatening landscape full of lonely lochs and mist-shrouded mountains, where the mystic arts are more powerful than shield walls. Charlie Simpson reads it as if he believed every word.

Charlie Simpson gives an excellent reading of Rosemary Sutcliffe’s The Eagle of the Ninth. Forcibly retired from the Roman army because of a wound, young centurion Marcus Flavius Aquila goes in search of the Ninth Legion, led by his father, which disappeared many years before. Exciting and informative – and recently released as the movie The Eagle.