In celebration of the 250th anniversary of its conception, Naxos AudioBooks has recorded The Decline and Fall of the Roman Empire, one of the greatest historical texts of all time, in its entirety.

David Timson, the reader, has undertaken this gargantuan task with meticulous preparation, incorporating the most salient of Gibbon’s footnotes. Timson’s magnificent new reading does full justice to the ballast and majestic language of the work.

DAVID TIMSON – THE DECLINE AND FALL OF THE ROMAN EMPIRE

British narrator David Timson has garnered a bit of a reputation for recording long – very long – works of literature. His latest is Edward Gibbon’s six-volume The Decline and Fall of the Roman Empire, which required copious research as well as many, many hours in the studio. (The final product is about six full days’ worth of listening.) 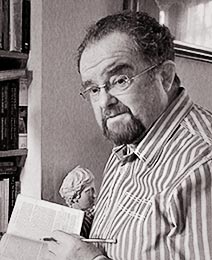 ‘I’m very grateful that I’ve had the opportunity to read it! I don’t think unless it had been a job I’d have ever gotten round to it,’ Timson told us. ‘I was talking to my dentist, and he said to me that he’s had it on his shelf for about 20 years, but when I told him I’d done the audio, he said he’d buy that instead!’

Before Decline and Fall, Timson completed a ten-year cycle of recording the entire Sherlock Holmes canon. ‘Nicolas [Soames, publisher of Naxos AudioBooks] has just asked me if I’d like to do Edmund Spenser’s The Faerie Queene. He seems to earmark me for the epics.’

Timson began his acting career in radio drama. ‘I won a competition that is called the Carleton Hobbs competition. I hadn’t really had any thoughts while I was at drama school of doing voice work specifically, or radio work, but I went into this competition, and I won it, and that meant that I got six months’ work at the BBC, which is a pretty good start when you come out of drama school. I’ve worked for the BBC consistently right up to the present time, so it’s been a fantastic foundation for my whole career.’

And though he didn’t come to audiobooks until he was ‘well over 40,’ now it’s his main form of acting, and he loves it.

‘I think the joy of it for an actor is that it’s your interpretation. You’re in control of the whole book. It’s not like if you’re doing a play, where you just have responsibility for your own part. Here, you have responsibility for the style, the tone, and all the characterizations. I’ve done lots of Dickens, and something like Dombey and Son had 48 different characters. And it’s a tremendous responsibility but also a great privilege to be given your personal expression of that book.’

Timson has also directed several Shakespeare plays for Naxos (including Kenneth Branagh’s Richard III), and he teaches at RADA, the Royal Academy of Dramatic Art in London. ‘I’m trying to educate the next generation of audiobook readers!’

So, after all those epics, does Timson have any particular favorites? ‘Any Dickens. Any Dickens I love. Shakespeare I love, of course. I’m very predictable. And Gibbon now. I think I can add Gibbon to that.’ 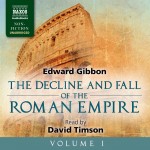 THE LIFE AND WORK OF EDWARD GIBBON

It was at Rome, on the 15th of October, 1764, as I sat musing amidst the ruins of the Capitol, while the barefoot friars were singing vespers in the Temple of Jupiter, that the idea of writing the decline and fall of the city first started to my mind.

Memoirs of My Life and Writings, 1796

Gibbon was born at Putney, Surrey, on 8 May 1737, into a comfortable, though not particularly wealthy, family. At the age of ten, his mother died and he was brought up by an aunt. During childhood he was always sick and of a weak disposition. This interrupted any regular attendance at school and led to his being privately educated at home, where he had access to his father’s extensive library. This developed the natural scholar in Gibbon at an early age.

At age 15, he went to Magdalen College, Oxford, and he ‘arrived with a stock of erudition that might have puzzled a doctor’ (Gibbon, Memoirs).

Ever curious, Gibbon challenged the Anglican clergymen who were his tutors as to the true faith. His inclination was towards the Roman Catholic faith, and after consultation with a Roman Catholic student, he converted to Catholicism. It was a rash decision, for by English law, Roman Catholics were excluded from public office and ostracised from many rights available to their Anglo-Catholic brethren.

When Gibbon’s father learnt of his son’s actions he was furious and insisted that his son should be sent to Lausanne, Switzerland, which was a centre of Calvinism, to be re-indoctrinated to the Protestant faith.

It was an instant success and quickly ran into three editions

Gibbon studied there under the Calvinist minister Daniel Pavilliard for nearly five years (1753−1758). During this time he renounced his conversion, became fluent in French and Latin, had a meeting with Voltaire, and for the one and only time in his life, fell in love, with a beautiful and highly intelligent girl, Suzanne Curchod. Once again, Gibbon was thwarted by his father who would not countenance ‘this strange alliance’, and Gibbon reluctantly returned to England. Reflecting on this in his Memoirs, Gibbon wrote: ‘I sighed as a lover, I obeyed as a son.

With the advent of the Seven Years War in 1760, Gibbon dutifully joined, with his father, the local militia, which was assembled in response to the possibility of a French invasion. He does not seem to have shone as an officer. At the end of his term of service he embarked on a grand tour of Europe, an obligatory experience for educated young men in the 18th century. Arriving in Rome early in October 1764, he was overwhelmed by its magnificence and antiquities, and as he said in his memoirs it was here he first began to conceive his magnum opus, but it would be nine years before he began to write it. The first volume of The History of the Decline and Fall of the Roman Empire, shortened here to The Decline and Fall of the Roman Empire, was published in 1776. It was an instant success and quickly ran into three editions. Volumes II and III appeared in 1781, with equivalent success. In the same year, Gibbon was elected as an MP for Lymington, but despite a dead end job in the board of trade in Lord North’s declining government, his parliamentary career was uneventful.

Resorting to his true vocation, he moved back to Lausanne and shared accommodation with an old student friend, George Deyverdun, and completed the last three volumes of his Decline and Fall, which were all published in 1788, to coincide with his 51st birthday.

In 1793, when the effects of the French Revolution began to intrude on his Swiss idyll, he returned to England. His health had begun to fail, an enlarged scrotum caused him considerable pain and despite several unsuccessful operations, he died in his sleep on 16 January 1794, at the age of 56.

A NOTE ON THE TEXT

The text used in our unabridged recording of Gibbon’s The Decline and Fall of the Roman Empire is the standard Everyman edition of 1910. It is a clean text complete and unedited, and in six volumes it reflects the division of chapters of the original edition of the 1780s.