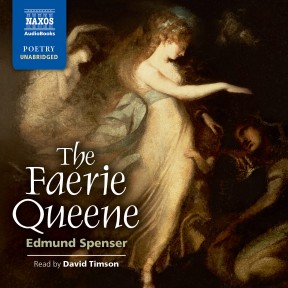 This remarkable poem, dedicated to Queen Elizabeth I, was Spenser’s finest achievement. The first epic poem in modern English, The Faerie Queene combines dramatic narratives of chivalrous adventure with exquisite and picturesque episodes of pageantry. At the same time, Spenser is expounding a deeply felt allegory of the eternal struggle between Truth and Error…

In most Arthurian romances, the noblest monarch in the world is King Arthur, and the greatest knight is Lancelot, who tragically falls in love with Arthur’s queen. In the romances surrounding Amadis of Gaul, on the other hand, the noblest monarch is King Lisuarte, and the greatest knight is Amadis, who has the good fortune to fall in love not with Lisuarte’s queen, but with his unmarried daughter, the Princess Oriana. Spenser takes this trend a bold step further: in his vast poetic fantasy, the noblest monarch is the Queen of Faerie, and the greatest knight is the young Prince Arthur, not yet a king in his own right, who falls in love with that same unmarried Queen, the tantalizing Gloriana. In fact, it is Gloriana who takes the initiative by making herself known to Arthur and declaring her love for him, but then vanishes, leaving him to seek her out in a world of pathless forests.

In The Faerie Queene, then, Spenser is creating an epic-scale, alternate-history prequel to the Arthurian romances we already know: nearly a quarter of a million words of loosely intertwined adventures featuring (for the most part) an altogether new cast of amorous knights and ladies, new champions who must quest for true love and virtue while combating miscreants, monsters, wizards, and witches in a land drenched with symbolism and enchantment. (The fact that everything is symbolic is part of the enchantment.) In all this, he aims to do for England and Britain what Homer and Virgil and Ovid had done for Greece and Rome: his poem aspires to be a great epic in its own right, and if its characters are not quite as apt to recall Odysseus or Aeneas as Lancelot or Gawain, they are at least no more likely to encounter a guardian angel than an Olympian goddess.

In such unabashed intermingling of ordinarily disparate fantasy realms and genres, The Faerie Queene was a major influence on C. S. Lewis in the Chronicles of Narnia; and, long before that, its trailblazing splendor of ancient, medieval, and modern learning, penetrating moral insight, vividly sensuous imagination, unexampled metrical fluency, and rapturous prosodic mastery had served as both incitement and inspiration to nearly every other poet of the English Renaissance, including Shakespeare, and to many others in the centuries that followed.

The challenge posed to any would-be narrator by both the nature and the stature of such a work is formidable, but luckily the supremely accomplished David Timson was willing to take up the gauntlet. True, Timson is not able to inhabit the author and his characters as fully as in his readings of Sherlock Holmes stories or Dickens novels. There is simply not much spoken dialogue in The Faerie Queene for a gifted character actor to latch onto, and not much that lends itself to a novelistic approach to oral narration. Spenser’s is an older manner of romance: remote, exotic, stylized. A brisk willingness to wax rhapsodic even at the risk of sounding hokey may be the best way to engage such high-flown material; Timson has done that brilliantly in the Naxos Poems of the Orient collection, and so of course proves more than capable of warming up to what Spenser is doing here as well. His performance never falls short of eloquence, and, when the wheels of his spoken narration mesh fully with the thematic and emotive gears and springs driving Spenser’s narrative from within, they achieve a remarkable forward impetus. At such moments, Timson fully captures the gripping incantatory pulse of Spenser’s lines and stanzas as they weave their stirring, brooding, or exhilarating spell of power.

At other times, unfortunately, he seems to treat The Faerie Queene as if it were no more than a juvenile fantasy novel. But don’t get me wrong: even in non-epic modes, Timson manages some astonishing feats. In fact, given that Spenser is a pre-Enlightenment poet and romancer rather than a pioneering novelist, it is amazing how much novelistic immediacy Timson is able to wring for us from his ringing cantos. When the poet tells us how the haughty Queen Lucifera lords it over her subjects and distinguished visitors, we now, thanks to Timson’s performance, hear this as the projected narration she is listening to in her own head, as if she were imagining a newscaster’s voiceover proclaiming her magnificence. And Timson is not freelancing here, not going rogue; he is foregrounding something that we can now see was always there. Forget what I said before: the supposedly remote, exotic, stylized Spenser, like one of the great classic novelists who follow him, is letting what seemed to be impersonal omniscient narration shade into direct, intimate, vivid expression of a character’s mind.

Still, novelistic and dramatic methods are generally not the most salient means by which Spenser seeks to galvanize our insight and enjoyment, and in singling out the merits of this recording it would be wrong to overemphasize them. For one thing, Timson’s repertoire of vocal characterizations, so expertly deployed to render the denizens of Doyle’s or Dickens’ London, often seems less suited to the knights and ladies of Spenser’s Faerie Land, with the result that what is by rights an epoch-making masterpiece occasionally seems no more than an idiosyncratic minor classic. That’s too bad; but Timson’s exuberantly vigorous narration, strictly as such, is for the most part so dazzling as to make the unabridged Naxos Faerie Queene beyond question a five-star listening experience. For the most part, Timson, like Spenser, is simply amazing.

Spenser’s long but incomplete epic, allegorically instructive and linguistically archaic, is also a fantasy romp among knights, monsters, witches, and beautiful damsels. David Timson both conveys the fun and actually makes the poem easier to understand (though perhaps still daunting for newcomers) by interpreting it through his narration. He uses his voice richly and well to convey both the emotion and thought of the text with clarity and intelligence. He skilfully distinguishes and characterises, especially, the male personae, sometimes using class and regional accents. His females are less convincing, and his voice for the heroine, Britomart, is oddly unpleasant. But Timson’s fine reading rescues the poem from academic dryness and renders it as the pleasurable entertainment it was, at least in part, meant to be.