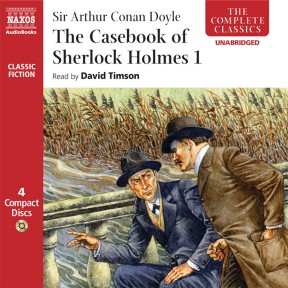 The Casebook of Sherlock Holmes – Volume I

These six cases are among the last undertaken by Sherlock Holmes before he retired to the Sussex downs. However, the problems facing the sleuth are as diverse and challenging as ever. With seeking the whereabouts of the stolen Mazarin Diamond, discovering the importance of being called Garrideb, encountering a mysterious murder on Thor Bridge, searching for eternal youth and the threat of a Vampire in Sussex, there is no sign of Holmes’s deductive powers slowing down. David Timson’s award-winning series is widely acknowledged to be among the very best interpretations of the master sleuth.

It’s just a regular day for Sherlock Holmes and his admiring sidekick Dr Watson – no sooner has a cipher of seemingly random numbers been rapidly revealed by the razor-sharp Baker Street sleuth to contain a dire warning, than a policeman turns up to whisk the two men off to a moated castle where someone has been murdered in baffling circumstances. Holmes sees the hand of his deadly enemy Professor Moriarty behind the deed, but the roots of the tale turn out to be in the violent gang culture of the Pennsylvania coalfields. This backstory extends Arthur Conan Doyle’s The Valley of Fear beyond the usual length for a Holmes adventure, although David Timson, who reads the story, has to work hard to keep us entertained until the great detective comes back on the scene.

With The Casebook of Sherlock Holmes Volume I David Timson has almost completed his unabridged reading of the entire Sherlock Holmes Canon – and what a triumph it is! As fine an achievement in its way as the complete BBC Radio 4 dramatisation. Once again Mr Timson proves that he is the equal of any of our great ‘voice men’, capable of creating a living character by the pitch of his voice and the rhythm of his speech. As an example, there are bellicose old autocrats in four of the six stories here (‘Thor Bridge’, ‘The Mazarin Stone’, ‘The Creeping Man’, and ‘The Blanched Soldier’) but each comes across as a unique individual. The stories themselves vary considerably in quality; Mr Timson has treated the worst as seriously as the best – and so unintentionally made me aware while listening of just how poor the writing is in ‘The Mazarin Stone!’. As usual, David Timson himself has provided perceptive and informative notes to the stories, and Sarah Butcher has chosen thoroughly appropriate music, this time by Saint-Saëns, Grieg and Borodin.

Roger Johnson, The Newsletter of the Sherlock Holmes Society of London