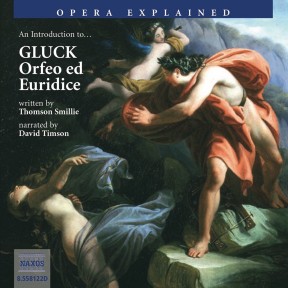 Based on the simple yet deeply moving legendary tale of Orpheus, who loses his beloved wife to death but is able to restore her through the power of his music, Orfeo ed Euridice is among the earliest operas to hold a secure place in the repertory. Gluck lavishes a wealth of beautiful melody on this tale, whose appeal to composers is obvious; yet the abiding strength lies in the power and majesty of his inspiration, whether in the solos, the choruses, or the ballet music – which is surely the finest written for any opera.

From its early origins in Italy opera spread across Europe, establishing individual and distinctive schools in a number of countries. France had an early and long- standing love affair with it – hence the term grand opéra, referring to the massive five- act creations that graced the Paris Opéra in the nineteenth century. Germany had an excellent school from as early as Mozart’s time, and opera perhaps reached its highest achievement with the mighty music dramas of Richard Wagner. Russia, Great Britain and the Americas have also made their contributions.

In the popular imagination, however, opera remains an Italian concept – and no wonder. From its earliest years Italians dominated the art: Cavalli and Monteverdi were among the first to establish its forms; there was a golden age, called the bel canto, at the beginning of the nineteenth century when Bellini, Donizetti and Rossini ruled supreme; Giuseppe Verdi was probably the most revered artist in musical history; and, for many, Puccini represents in every sense the last word in this beloved genre.

Although the twentieth century has not been as lavishly endowed with opera composers, it can still boast a few, including Richard Strauss, Igor Stravinsky and Benjamin Britten – and, maybe most significantly in the long run, those errant step-children of opera, the Broadway musical and the Lloyd Webber spectacular.

It is an extraordinary theatrical work that can remain popular for almost 250 years. Indeed, we might consider it one definition of a genuine masterpiece – that it is able to speak clearly to successive generations and deliver the same powerful message across the maelstrom of changing fashion. Such a work is Gluck’s great retelling of the legend of Orpheus and his devotion to his wife Eurydice. Wagner, with uncharacteristic brevity, explained why he also chose mythical subjects for many of his operas – namely that ‘a mythical story is eternally true’.

Orpheus was the son of Apollo and the incarnation of music. When his wife died from a snake bite he followed her down to the Underworld where the power of his music was so great that it impressed that notoriously intransigent couple Pluto and Proserpine, King and Queen of Hell. They allowed Eurydice a reprieve, but on one condition (there is always one condition in these stories): Eurydice may follow her husband up to the world of the living but Orpheus must not look back to check on her. He does of course and Eurydice dies again; and there the Greek legend more or less ends. But Gluck knew the box-office value of a happy ending, as indeed did many later composers including Mozart and Rossini. In Gluck’s version, Love, in the chubby form of the god Amor, or Cupid, rewards Orpheus for his loyalty by restoring his wife to him.

The attraction of the legend for composers from Monteverdi to Offenbach and beyond is obvious. Music, it says, has the power to transform nature, and nothing, not even the powers of death and hell, can stand against it. The oldest extant opera may be Peri’s Orfeo, and the oldest opera to have a toehold in the repertoire may be Monteverdi’s The Legend of Orpheus; but it is Gluck’s masterly telling of the tale that commands the greatest affection.

Whole shelves of books have been written about ‘Gluck’s Reforms’, but basically it all boils down to the determination of the composer and his highly gifted librettist Calzabigi to strip away the sillier operatic conventions of the day: excessive vocal ornamentation, dramatic improbability and endless recitative. Instead they offered direct vocal expression, a credible situation and arias of melodic beauty.

But an opera can have the best of good intentions and the very best of libretti and still flop. What makes an opera succeed is its music: since everyone then (1762) and now loves a good tune, an opera will stand or fall on the quality of its melodies. And herein lies the triumph of Gluck’s creation. One aria: ‘Che farò senza Euridice’ is the first genuine smash hit in operatic history. Coming after Eurydice’s ‘second death’ it is an impassioned plea from the heart of the bereaved husband; and it is the emotional fulcrum of the opera.

This recording restores the purity and directness of the original Vienna 1762 version, both in textual matters and in a brilliantly incisive recreation of the probable sound textures of the period. A gifted contralto has the power and vocal range to produce as closely as possible (we believe) the effect of the great castrato Guadagni, who created the role of Orfeo. Despite the disappearance of the very voice type for which the opera was written, Orfeo continues to absorb our attention, proving surely that a work of genius transcends any changes in fashion.

Scene I. Solemn music at the rise of the curtain reveals a lonely grove of laurels and cypresses, with the tomb of Eurydice, around which nymphs and shepherds lament, while Orpheus calls on his beloved. In a recitative, Orpheus bids his companions to leave him alone to mourn. He calls out the name of his beloved Eurydice, and bitterly cries out against the powers of the Underworld.

Scene 2. Amor, the god of Love, appears, offering help. Orpheus will be allowed to bring Eurydice back from the dead if he can, with his music, placate the furies and spirits of Hades. In bringing her back to the land of the living, he must not turn to look at her as she follows him, nor may he explain to her the reason for his actions – if he does, he will lose her forever. Orpheus is overjoyed, though aware of the difficulties he will encounter, and sets off on his journey.

Scene 1. The scene is set in the dreaded caverns of Hades. Furies and spectres dance their infernal dance, interrupted by the sound of the lyre of Orpheus. He manages to placate them and they give way, allowing Orpheus to enter the gates of their realm.

Scene 2. The scene changes to verdant countryside, meadows covered in flowers, and murmuring streams. Orpheus is joined by heroes and heroines of old. He delights in the scene, but Elysium is not for him: his paradise is Eurydice, whom he now seeks. Eventually she is led before him, and he hurriedly leads her away on the path back to earth.

Scene 1. Orpheus is keen to leave Hades as quickly as possible. Eurydice is at first delighted, and then puzzled and angry at the failure of her husband to embrace her or even look at her. When she confesses that she would rather die than live without his love, he can resist no longer and turns to look at her. At that instant, Eurydice falls at his feet and he laments her second death. Now he is ready to die, only wanting to follow her back to Hades.

Scene 2. Amor intervenes, with a reward for Orpheus’s love and constancy: Eurydice shall live again. She comes to life and they are reunited.

Scene 3. The scene changes to the temple of Love, where nymphs and shepherds celebrate the return of Eurydice, joined in their rejoicing by Orpheus.