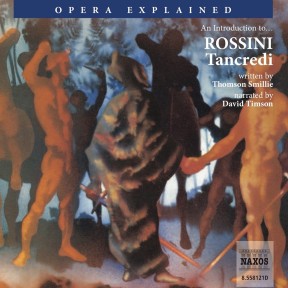 Rossini’s comic operas, like The Barber of Seville, are better known than his tragedies though he wrote in fact many more tragedies than comedies. One of them, his last, William Tell, is actually credited with launching the whole age of Grand Opéra. Tancredi is an early work – indeed his first smash hit – and it established his international fame. It has all the youthful verve of the comedies allied to a sure dramatic sense, and several of the arias, including the famous ‘Di tanti palpiti’, are magnificent examples of the sort of virtuoso vocal writing that earns the title ‘bel canto’: ‘beautiful singing’, first and last.

From its early origins in Italy opera spread across Europe, establishing individual and distinctive schools in a number of countries. France had an early and long- standing love affair with it – hence the term grand opéra, referring to the massive five- act creations that graced the Paris Opéra in the nineteenth century. Germany had an excellent school from as early as Mozart’s time, and opera perhaps reached its highest achievement with the mighty music dramas of Richard Wagner. Russia, Great Britain and the Americas have also made their contributions.

Rossini is one of a handful of composers who are as admired by posterity as they were celebrated during their careers. He is best remembered in history as the composer of a string of comic operas which made him the best-loved composer of what has come to be known as the ‘age of bel canto’. These operas invariably derived from the great Italian comic tradition of commedia dell’ arte, and a few of them, like The Barber of Seville and The Italian Girl in Algiers, achieve the rare distinction of being genuinely funny comic operas.

Other operas of Rossini’s immense output are of a type known as semi-seria, because they have comic moments but also a deeply serious purpose. Cinderella, the most humane of his comedies, and The Thieving Magpie are examples of this fascinating and elusive genre.

While Rossini is nowadays recognised for his comedies, he wrote many more tragic operas and was most highly regarded for them in his day. We remember him as a figure of comedy and delight, but these grand and serious operas built a vital bridge between the formal, courtly opera of the eighteenth century and the hurly-burly of nineteenth-century Romanticism. Scholars credit his last opera William Tell – written for the Paris Opera as Guillaume Tell – with creating the template on which the great nineteenth-century five-act French grand operas were based.

Rossini had a legendary reputation for laziness, and in this narrated introduction to Tancredi we revisit some of the very funny stories attached to him. But when you listen to his dazzling ensembles with their tens of thousands of cascading notes, the exhilaration of his orchestral crescendi, and the degree of ornamentation in his vocal writing – the very essence of bel canto – you soon conclude that laziness was not his leading characteristic. Indeed, to have written forty operas in

under twenty years suggests an absence of inertia.

Rossini retired at the very peak of his creative powers and spent his later life eating, talking and eating some more, while the storm of Romanticism – which he helped to create – raged about him. It is one of the most fascinating career moves of any great artist, and there are three usual explanations: one, that he had made enough money; two, that he was written out; and three, that fashion had changed and passed him by, and he was smart enough to know it.

However, his puzzling retirement lay far in the future when this present opera was written. Tancredi belongs to the very spring of his creativity and is an immediately attractive work of youthful vigour. It was written when Rossini was twenty, though it was his tenth opera. Later scholars would talk of it representing his ‘first maturity’, but Rossini’s contemporary and first biographer Stendhal revered Tancredi for its ‘genius in all its naiveté’. He would also opine that in later operas Rossini was corrupted by foreign influences, while in Tancredi his genius is seen at its purest and its peak.

Tancredi is extremely enjoyable: it has a good story, no more improbable than most of the period; strong dramatic action; wonderful solos and ensembles; and a sophistication in the orchestral writing which would confound anyone tempted to dismiss it as an apprentice work. Rossini brilliantly exploits the range and flexibility of the mezzo-soprano/contralto voice in some marvellous arias, of which ‘Di tanti palpiti’ – a real hit in its day – is the most thrilling. He proves in this early work that he is a master of drama, characterisation and ensemble, without once surrendering his melodic gift.

Amenaide’s father, Argirio, has promised her hand in marriage to the leader of a rival faction, Orbazzano. He hopes to unite all groups against the common enemy, the Saracens, who are besieging Syracuse. But, as she tells her friend Isaura, Amenaide loves Tancredi, the deposed King of Syracuse. She sends him a message, warning him that he is suspected of being an ally of the Saracens and urging him to escape. She does not tell him about the marriage plans. When he discovers these, he is angry with her. So she confronts her father and refuses Orbazzano. Orbazzano then produces a letter, from Amenaide to Tancredi, which was intercepted near the Saracen camp. Tancredi’s name is not on it, and it is therefore assumed that it was intended for the Saracen chief, Solamir. Accused of shameful betrayal, Amenaide is put in prison.

Amenaide’s prison. Argirio laments his daughter’s fate – it is his duty to condemn her. Tancredi, in disguise, challenges Orbazzano to a duel to prove Amenaide’s innocence, though he does not believe it. Tancredi is victorious and his identity is revealed. However, he still believes Amenaide to be guilty and, despite her pleas, goes to defend the city against the Saracens, ready to die in combat. But his forces defeat the enemy and the siege of Syracuse is lifted. He is revealed as the intended recipient of Amenaide’s letter, and the lovers are reunited with Argirio’s blessing while the people celebrate their victory.