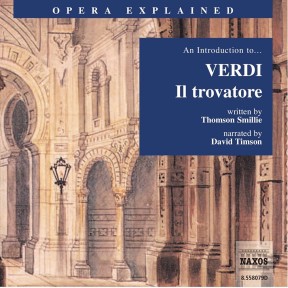 Il trovatore has been ruthlessly parodied. It is a tale of murder and mayhem, burned babies, roasted hags, would-be nuns, strolling minstrels and bad baritones. And indeed the libretto does call for a willing suspension of disbelief. The reward is in the music, a score as prodigally melodic as only the mature Verdi could write: the ‘Anvil’ Chorus, the ‘Miserere’ scene, two great tenor arias, a beautiful baritone aria – a richness without embarrassment.

From its early origins in Italy opera spread across Europe, establishing individual and distinctive schools in a number of countries. France had an early and long-standing love affair with it – hence the term grand opéra, referring to the massive five-act creations that graced the Paris Opéra in the nineteenth century. Germany had an excellent school from as early as Mozart’s time, and opera perhaps reached its highest achievement with the mighty music dramas of Richard Wagner. Russia, Great Britain and the Americas have also made their contributions.

Soon after its 1853 premiere, Il trovatore swept with astounding popularity across first Italy, then all of Europe, before crossing the Atlantic, creating among other things a minor industry in the forging of anvils for its famous ‘Anvil’ Chorus. Critics have divided over whether it is predominantly Verdi’s supreme melodic achievement or as improbable a tale of mayhem as ever graced the operatic stage. It is perhaps both; certainly the wider operatic public for whom ‘dramatic verisimilitude’ is never a major criterion has always adored it.

Il trovatore occupies a lofty spot in the operatic pantheon, being one of a trilogy of works which for many virtually define opera as an art form. Three back-to-back masterpieces – Rigoletto, Il trovatore and La traviata –, in addition to cementing Verdi’s reputation as the supreme purveyor of great music dramas, confirmed his status as Italy’s most-loved composer. Born in 1813, he would live into the 20th century and see a united Italy take its place among the great nations of Europe. To use a cinematic metaphor, the scenario for this great movement was written by Mazzini, the political genius who produced it was Cavour, the military direction was by Garibaldi, and the score was written by Verdi.

Naturally such turbulent times produced turbulent art and Il trovatore, set against the venom of a civil war in 15th-century Spain, combines violent action with emotional turmoil. Leonora, the heroine, is loved by two men: the aristocratic Count di Luna and the wandering minstrel Manrico, the troubadour of the title. Prior events dominate the action. 20 years previously the old Count, Di Luna’s father, had condemned to the stake an old gypsy whom he believed had hexed his infant son. As the flames consumed her she called on her daughter Azucena to avenge her. The daughter had intended to oblige her mother by casting the Count’s baby onto the pyre but had accidentally thrown in her own child. The lust for revenge combined with remorse for her mistake motivates not only Azucena but much of the action, and therein – for some people – lies part of the problem. The story is improbable and the situations far-fetched. But the purpose of a libretto, surely, is to inspire the composer to write his best music. Judged by that standard, the libretto of Il trovatore is a triumph because Verdi responded to this Gothic horror story with possibly his most prodigally melodic score. Forget the later parodies – the tribute minor talent pays to genius – and relish anew the power and beauty of the ‘Anvil’ Chorus, and the melodic fervour of the soldiers’ choruses. Rejoice in the driving energy of orchestral writing a million miles removed from the ‘um-chum-chum’ accompaniment of earliest Verdi.

At the same time, it is notable how sophisticated is the manner in which character is delineated through music. Di Luna is the baddie of Victorian melodrama, yet still has one of the most lyrical arias written for a baritone, ‘Il balen’. Manrico is a conventional operatic hero, yet his ‘Ah! Sì, ben mio’ is tender and introspective. Leonora’s often conventional sentiments are expressed in arias of depth and musical sophistication, and the ‘Miserere’ scene juxtaposes the Italian obsession with sin and sanctity, but with a rare beauty and grace.

Spain, beginning of the fifteenth century.

Scene 1. Courtyard in the palace of Aliaferia. Ferrando, a captain of the guard commanded by Count di Luna, tells his companions a story: years ago, when the Count was a child, his younger brother was believed to be bewitched by an old gypsy. She was hunted down and burnt at the stake. Her daughter Azucena took revenge by kidnapping the brother, whose charred remains were found where the witch had been burnt.

Scene 2. The palace garden. Leonora, a lady-in-waiting to the Princess of Aragon, confesses to her companion Inez her love for Manrico, a troubadour who serenades her. She hears his voice and rushes to meet him, only to find Count di Luna. He is also in love with her and jealously confronts his rival. Despite Leonora’s protestations, the two men fight a duel.

Scene 1. The gypsy camp. Manrico, injured in the duel, has been nursed back to health by Azucena, whom he believes to be his mother. He won the duel, but was compelled by a voice from heaven to spare the Count’s life. Azucena finds no such mercy in the Count and tells Manrico how she had wanted to avenge her mother but in her frenzy cast her own son onto the flames instead of Di Luna’s brother. However, she immediately withdraws these words, and insists that Manrico is her son. News arrives that Leonora, believing Manrico dead, is about to join a convent. Manrico rushes off to save her.

Scene 2. The cloisters of the Jerusalem Convent. Count di Luna has come to abduct Leonora, but Manrico arrives in time to rescue her.

Scene 1. An army camp. Azucena has been captured by Count di Luna and his men. Ferrando recognises her as the gypsy who burnt the child years ago. As she calls for her son Manrico, Count di Luna realises he has the mother of his rival in his power. He decides to have her executed.

Scene 2. A room in the castle of Castellor. Manrico is about to marry Leonora but learns of Azucena’s capture and, resolving to rescue her in the rousing ‘Di quella pira’, leaves hurriedly.

Scene 1. Outside the palace of Aliaferia. The rescue of Azucena has failed and Manrico is now imprisoned with her. Leonora hears his voice from a prison window against the Miserere, chanted off-stage. She begs the Count for mercy, offering herself in exchange. He agrees to this, and pledges that he will release Manrico. Leonora meanwhile takes a poison.

Scene 2. A dungeon. Manrico tries to comfort Azucena, who is tormented by visions of the burning fire. Eventually she falls asleep. Leonora comes to tell Manrico he is free, but he reproaches her, knowing the price she will have paid. The poison soon takes effect, and she dies in his arms as the Count enters. Realising he has been deceived, he orders Manrico’s immediate execution. After it has been carried out, Azucena tells him he has just killed his brother. ‘Mother, you are avenged!’ she cries.