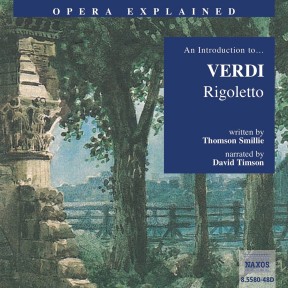 Rigoletto is simply wonderful entertainment. It is uncanny to listen to the opening ten minutes or so and recognise a dozen superb tunes. It is also much more – a daring (for its time) attack on aristocratic privilege, a tender love story, and an impassioned appeal on behalf of the disadvantaged, all set to music of such wealth and beauty that, with its sister operas La traviata and Il trovatore, it has almost defined Italian opera for 150 years. Overcoming initial trouble with the censors, Verdi’s Rigoletto was a smash hit at its premiere and has not been out of the repertoire since. It’s not hard to see why. From Thomson Smillie’s accessible account, the opera comes alive on just one CD. As he tells us, Verdi captures the gaiety of the court in Mantua: it ‘to borrow a famous phrase, shines like rotting mackerel by moonlight – it glitters and stinks’. David Timson is the perfect exponent of Smillie’s vivacious writing, securing a thoroughly entertaining and informative disc.

From its early origins in Italy opera spread across Europe, establishing individual and distinctive schools in a number of countries. France had an early and long- standing love affair with it – hence the term grand opéra, referring to the massive five-act creations that graced the Paris Opéra in the nineteenth century. Germany had an excellent school from as early as Mozart’s time, and opera perhaps reached its highest achievement with the mighty music dramas of Richard Wagner. Russia, Great Britain, and the Americas have also made their contributions.

But in the popular imagination opera remains an Italian concept – and no wonder. From its earliest years Italians dominated the art: Cavalli and Monteverdi were among the first to establish its forms; there was a golden age, called the bel canto, at the beginning of the nineteenth century when Bellini, donizetti, and Rossini ruled supreme; Giuseppe verdi was probably the most revered artist in history; and, for many, Puccini represents, in every sense, the last word in this beloved genre. Although the twentieth century has not been as lavishly endowed with opera composers, it can still boast a few, including Richard Strauss, Igor Stravinsky, and Benjamin Britten – and, maybe most significantly in the long run, those errant step-children of opera, the Broadway musical and the Lloyd Webber spectacular.

Of the unholy trinity of Rigoletto, Il Trovatore and La Traviata, which represents a pinnacle of Italian opera as a popular art form, Rigoletto is in many ways the most approachable and enjoyable. It may not be as prodigally melodious as Il Trovatore (though it does contain the greatest pop song in history!), nor as deeply touching as La Traviata, but it more than compensates with a seamlessly effective story containing a galaxy of memorable stage characters and enough superb tunes to satisfy an army of barrel organists.

Verdi was approaching 40 years of age when he set the story of the hunchbacked jester Rigoletto; a waspish, disagreeable man whose sole redeeming feature is his love for his daughter Gilda. verdi and his oft-bullied librettist fashioned also the devil-may-care figure of the duke of Mantua, whose flippant way with women is the mainspring of the tragedy. verdi was at the peak of his amazing melodic powers when he was asked by the aristocratic clique that ran the venice opera house – the lovely, late La Fenice – to write an opera. despite, or maybe because of, the dominance of venice at that time by the royal and reactionary Hapsburgs, verdi chose a subject that held the ruling classes up to contempt. The source was a totally banned play by the French playwright victor Hugo (of Les Misérables fame), based, ’tis said, on a true-life incident concerning the French king François I, a noted philanderer, and his jester Triboulet. In the play, the king is depicted as a regular low-life. This of course, though accurate, offended the Austrian censors no end.

After immense wrangling, and vituperative exchanges of letters, the story was softened and some compromises made. And such was verdi’s prestige by this mid- stage in his career, that his aristocratic patrons supported him against authority. The king in the plot was demoted to a duke of nearby Mantua, and the period was altered. For some reasons, censors were more amenable to sensitive topics if they were politely distanced in time or place. For example, the murder of a king in A Masked Ball became acceptable when amended to the murder of a Boston governor. Similarly, the professional services of the call-girl violetta in La Traviata were allowed as long as the scene of the action was reset to 17th-century England.

Rigoletto received its premiere on 11 March 1851 in venice. It was a smash hit, and is one of a handful of operas which have never been out of the repertoire since its triumphant premiere. And no wonder. It has every possible ingredient of success. The setting is the glittering and corrupt court of Renaissance Mantua. The so-called hero is the glamorous young duke, whose politically incorrect views on women also supply the best tunes. His would-be nemesis is Rigoletto, a multi-faceted figure: jester, cynic, foul-mouthed butt of everybody’s basest instincts, yet possessed of nobler feelings. His daughter Gilda virtually incarnates the pure unspoiled virgin of Italian operatic legend, and the role, with its exquisite flights of coloratura fancy, exploits that elegant vocal style we call ‘bel canto’.

Verdi handled an opera chorus better than any composer before or since, and by the time he wrote Rigoletto, was also an orchestral colourist of the first quality. From the darkly sinister opening statement of the Curse – La Maledizione is the subtitle of the opera – through a dazzling series of arias and ensembles including opera’s most famous quartet, the opera shows Italy’s greatest master at the peak of his incredible powers.