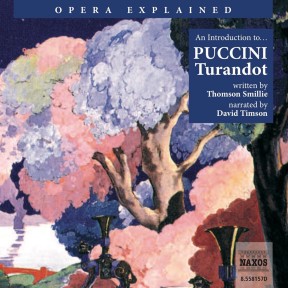 Puccini’s swansong has a claim to being the last great popular opera. Its melodies have enchanted audiences since its posthumous premiere in 1926, two years after Puccini’s death. It involves a chilling story of love and cruelty, an intriguing cast of characters against the exotic backdrop of Imperial China, magnificent choruses and ensembles, and dazzling orchestration in an exotic score that comprises a string of remarkable arias – among which the great tenor aria ‘Nessun dorma’ is the jewel. It is more than Puccini’s last opera: it is the last word, in every sense, on Italian opera.

Although the twentieth century has not been as lavishly endowed with opera composers, it can still boast a few, including Richard Strauss, Igor Stravinsky and

Benjamin Britten – and, maybe most significantly in the long run, those errant step- children of opera, the Broadway musical and the Lloyd Webber spectacular.

The popularity of Puccini’s final great opera should not blind us to its strong musical and dramatic qualities. In addition to being arguably the last great popular opera – in effect the swansong of an entire art form: that of Italian grand opera as popular entertainment – it is also a finely crafted work by the last great master. Puccini had an unerring instinct for what would stir audiences and in this final work combined a good story with a rich cast of personalities in an exotic setting, clothing the whole work in music at once beautifully melodic and particularly complex.

The title character is of course a woman – nearly all Puccini’s operas are named after their female leads, such was the importance and adoration he attached to women – and in Turandot he created one of the great enigmatic figures of opera. She is the Ice Princess: a woman who obsesses over a distant ancestor who was ravaged by a marauding male. No man will win Turandot unless he can answer three riddles, and as the curtain rises the latest suitor is about to pay with his head the price of failure.

An Unknown Prince accepts the challenge and in the second act – in a scene of conspicuous musical brilliance – wins the contest only to offer back to Turandot that if she can discover his name by dawn he will agree to die. The order goes out that ‘None Shall Sleep’ (‘Nessun Dorma’), and from that phrase arises Puccini’s superb tenor aria which became renowned as the anthem of international soccer.

Much of the fascination of Turandot derives from the fact that Puccini died in 1924, leaving the work unfinished. A contemporaneous composer, Alfano, was given the awesome task of completing the opera from Puccini’s sketches, and while the ending has its detractors no one doubts its theatrical power. The finished work was posthumously produced in 1926.

Turandot is a very proper finale to Puccini’s career, combining and distilling all that was great in his art and some that was not. He made the lives of his librettists a misery until they provided exactly the situations and the poetry that would help him spin his magic theatrical web. He conceived one after another great tune, built massively effective ensembles − huge crowd scenes of real majesty – and orchestrated the work with a dazzling orientalism which employed the full symphonic resources plus an astonishing battery of exotic percussion. The only negative aspect, to some modern sensibilities, is the heartlessness and cruelty of the title character. But then cruelty had been a quality of Puccini’s work – the offstage torture in Tosca is an example – and here he allows this quality to serve as a foil for the exquisite figure of Liù, the slave girl who represents the kinder, gentler aspect of womanhood. Appropriately her death scene was the last Puccini wrote. The trio of Ping, Pang and Pong is another notable element of the opera, involving complex music that adds a new level of sophistication to the score.

From its savage opening – orchestral stabs of pain offsetting the glorious outpourings of the chorus − through to the final majestic choral setting of ‘the big tune’, Turandot is an opera that serves as a worthy close to a great career and maybe to opera as an art form of the people.

A square in front of the Imperial Palace. In front of a large crowd, the Prince of Persia is sentenced to death, having failed to answer three riddles posed by Princess Turandot. Only a suitor of noble blood who can correctly answer these will be permitted to marry the Princess; otherwise, she vows, they are to be beheaded. Among the crowd is Timur, the elderly, deposed King of Tartary, with his faithful servant Liù. They meet Timur’s son Calaf, from whom he had been separated. Calaf is shocked by Turandot’s cruelty, but when, despite pleas from the crowd for mercy, she appears on the balcony to sentence the Persian Prince, Calaf falls in love with her. Three courtiers – Ping, Pang and Pong – as well as Calaf’s father and Liù try to dissuade him, but he sounds the gong: a signal that another candidate wishes to be put to the test.

Scene 1. A pavilion in the Imperial Palace. Ping, Pang and Pong lament the state of China and their enforced participation in Turandot’s cruelty. Scene 2. A courtyard in the Palace. In front of the enthroned Emperor and the assembled court, Turandot tells of how her ancestress was dishonoured and killed by a Barbarian King: to avenge her, Turandot has put in place this trial for her suitors. Calaf’s trial begins: he solves all three riddles correctly. Turandot is horrified and begs her father not to hand her over as a slave to a foreigner, but he says his oath is sacred. Calaf does not want to win her by force, however, and says that if she can discover his name before dawn he will die for her.

Scene 1. A garden of the Imperial Palace. Heralds may be heard proclaiming that none shall sleep in Peking that night until the unknown name is discovered. Calaf dreams of his victory in the aria ‘Nessun dorma’ (‘None shall sleep’). When the faithful slave girl Liù says she alone knows the name, Turandot orders her torture; but Liù is loyal to the end and kills herself with a dagger when she can bear the pain no longer. Her body is carried out, followed by the grieving Timur. Turandot and Calaf are left alone. Calaf kisses Turandot passionately. She realises she loves him, and he reveals to her his name.

Scene 2. The throne room. In front of the Emperor and the court, Turandot says that she has discovered the unknown Prince’s name: it is Love.