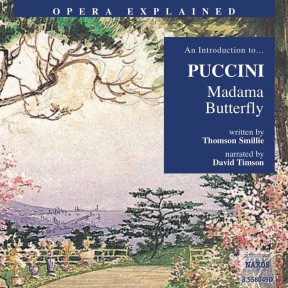 Madama Butterfly runs the gamut of operatic emotions. The title heroine has a fragility wonderfully expressed in her entry music, deep sexual instincts as shown in the love duet, and immense tragic stature in her last hours. The fate of Madama Butterfly – married to an American sailor and then abandoned – engages our emotions, as it obviously did Puccini’s to a degree equalled by few other opera heroines. The oriental setting and the exquisite orchestral and choral writings are treasured bonuses. This audiobook is the perfect introduction to Madama Butterfly. We learn about the background to Puccini’s ‘Japanese’ opera, the social themes of honour and loyalty it involves, and how it progressed from a surprisingly unsuccessful premiere to one of the central and best-loved works of the international operatic repertory. As the story unfolds, we get to know the melodies which make this such a moving and compelling opera.

But in the popular imagination opera remains an Italian concept – and no wonder. From its earliest years Italians dominated the art: cavalli and Monteverdi were among the first to establish its forms; there was a golden age, called the bel canto, at the beginning of the nineteenth century when Bellini, Donizetti, and Rossini ruled supreme; Giuseppe Verdi was probably the most revered artist in history; and, for many, Puccini represents, in every sense, the last word in this beloved genre.

It is one of the enigmas of opera that some of today’s most popular, adored even, works in the repertoire were disasters at their premieres, The Barber of Seville, Carmen, and Madama Butterfly being the most notorious exemplars of the phenomenon. But it is axiomatic that they overcame their difficult deliveries to become healthy and robust specimens of the operatic race.

In the case of Madama Butterfly the scale of the disaster was, well, operatic. In 1904 Puccini, heir to the great Giuseppe Verdi, the most admired composer of his day, was at the peak of his considerable power. Madama Butterfly is part of a trilogy of works (Tosca and La Bohème are the others) which defines Puccini’s status as surely as another contiguous trilogy (Rigoletto, La Traviata and Il Trovatore) defines Verdi’s.

Yet the premiere in February 1904 at the world’s most prestigious opera house, La Scala in Milan, was a howling travesty as the audience booed and whistled the piece into inaudibility. The reasons, in brief, were: the exotic, therefore unfamiliar, setting of the piece; the overlong Act I; the unsympathetic portrayal and general short-changing of the tenor; and the strangeness of the music. Eliciting our sympathy for the ‘minority’ figure rather than the ‘white’ hero was as radical as Verdi’s championing a call-girl in La Traviata. And the music, with its repeated use of the pentatonic, or five-tone, oriental scale sounded odd to Italian ears – or so they say in hindsight. Mob mentality is too complex an issue for full discussion in a CD booklet.

Puccini withdrew the piece, split Act I into two parts, toned down the racism, gave the tenor an aria, and relaunched Madama Butterfly three months later in the comparative obscurity of Brescia, where it took off. It has gone on to establish itself as one of the central works of the international repertory and one beloved of operatic impresarios, who adore its winning combination of economy and box-office appeal.

Puccini loved women, in art and in life, and named many of his smash hits after his heroines: an oddly overlooked fact. Butterfly is not only the central character of the opera, she is the opera itself. From the moment of her intentionally delayed entrance – and what an entrance! – she is rarely off the stage. Other characters matter only insofar as they relate to her, and her astonishing combination of childish delicacy (she is allegedly fourteen years old, a real challenge to the singer-actress) and immense power of character and voice makes her one of the most compelling figures in opera.

Puccini was, it cannot be said too often, a supreme master of theatre, and had an unerring sense of what ‘works’. So when he was taken to see David Belasco’s smash-hit play Madama Butterfly, despite not speaking a word of English, he sensed instinctively that it would make a brilliant opera.

Things oriental had been in vogue throughout the later nineteenth century ever since commodore perry ‘opened up’ Japan in 1854, a phrase which reveals a typically occidental mind-set. ‘Opened up’ to whom? ‘Far East’ of what? The theme of the brash young American who sows his wild oats and seeks to avoid the consequences was to fuel many later, including Vietnam-era, works, but at the time was a real shocker to late Victorians. But once again it is the combination of outstanding characters (or maybe just one particularly outstanding character), a deeply moving plot (if you don’t weep at the closing pages of the score ask for your money back!), and music of overwhelming power that guarantees the opera’s success. Even those with hearts of stone find themselves moved by the exquisite Entrance of Butterfly, stirred by the highly erotic love duet, thrilled by the great aria ‘One Fine Day’, and crushed by the mighty pentatonic chords that hammer out Butterfly’s death agony. Strong stuff!