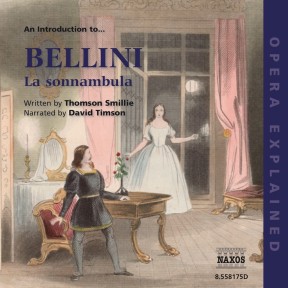 La sonnambula was written by Bellini as a vehicle for two of the supreme singers of his age and accordingly is a fine example of the school we call bel canto, where beauty of voice and the virtuosity of the singers is integral to conveying the emotions in the soul of the composer. The fact that Bellini was one of the great melodists, writing long, beautiful vocal lines, that he was a master orchestrator and that he could write stirringly for the chorus all conspire to make La sonnambula an extremely enjoyable example of Italian opera in its prime.

The word ‘opera’ is Latin and means ‘the works’; it represents a synthesis of all the other arts: drama, vocal and orchestral music, dance, light and design. Consequently, it delivers an emotional impact which none of the others can match. The only one of the arts whose origins can be precisely dated, it was ‘invented’ in Italy in 1597 as part of the Renaissance – the rebirth of interest in classical values. As an art form it is truly international, crossing all linguistic and cultural barriers, and it is probably the only one whose audience continues to expand, not in spite of but because of developments in entertainment technology.

From its early origins in Italy opera spread across Europe, establishing individual and distinctive schools in a number of countries. France had an early and longstanding love affair with it – hence the term grand opéra, referring to the massive five-act creations that graced the Paris Opéra in the nineteenth century. Germany had an excellent school from as early as Mozart’s time, and opera perhaps reached its highest achievement with the mighty music dramas of Richard Wagner. Russia, Great Britain and the Americas have also made their contributions.

Although the twentieth century has not been as lavishly endowed with opera composers, it can still boast a few, including Richard Strauss, Igor Stravinsky and Benjamin Britten – and, maybe most significantly in the long run, those errant stepchildren of opera, the Broadway musical and the Lloyd Webber spectacular.

With his gentle good looks and charming manner, Vincenzo Bellini was in every sense the embodiment of the Romantic young artist. His exquisite music delighted the great Italian singers of his day, and audiences idolised him. He also made the smart career move for a Romantic figure of dying young.

He was born in 1801 in the Sicilian port of Catania, whose opera house is now named after him. In his short life – he died a few weeks before his thirty-fourth birthday – he wrote only ten operas, most of which were hits. Today, even his less well-known ones still maintain a toehold in the repertoire whenever singers can be found to sing his deceptively simple music. This is because Bellini was perhaps the prime exemplar of the bel canto school of composers, which includes his older rivals Rossini and Donizetti. Bel canto simply means ‘beautiful singing’, and Bellini’s pure, limpid melodies and long legato lines provide the ideal vehicle for singers to shine, assuming they possess the technical skill to spin out these melodies.

One aria in La sonnambula has a tune that runs for an uninterrupted thirty-six bars. Mastering the breath control necessary to maintain beauty of tone along such a line is what characterises the great bel canto singer. It was Maria Callas who virtually revived modern interest in the serious bel canto operas through her superb vocal technique and magnetic personality. Later, Joan Sutherland would confirm their place in the operatic repertoire, defying the naysayers who were scornful of their improbable plots and vocal fireworks. But the naysayers miss the point. In these operas, the beauty of the singing is actually the message itself. Technical skill is admired for its own sake, and purity of vocal delivery is an expression of the work’s heart and soul.

La sonnambula has, it must be admitted, one of the more absurd plots among the major operas – less so, perhaps, than Il trovatore, but there is not much to choose between them. Amina is a simple village girl who becomes engaged to a rich young landowner, Elvino. A nobleman visits the village and stays at the inn. Amina sleepwalks though his window and lies down on his sofa where she is discovered by the villagers and her fiancé (who breaks off the engagement). She is disgraced by this event. Her lover takes up with ‘the other woman’ until the nobleman explains the nature of somnambulism, and the sleeping Amina conveniently provides a perilous demonstration of it by walking a plank over the old millwheel.

Details of artistic verisimilitude and dramatic credibility meant little to the great stars of the nineteenth century, who eagerly grasped the opportunities to show off their wonderful vocal technique in Bellini’s exhilarating melodies and dazzling pyrotechnics. Singers like Giuditta Pasta (who created the role of Amina), Maria Malibran and Luisa Tetrazzini all walked the plank in the name of art.

Norma, which has never been out of the repertoire since its premiere in 1831, has proved to be Bellini’s most durable opera, and there is no doubting its superior dramatic structure. But for as long as there are audiences who cherish beauty of vocal expression, there will always be a place for minor masterpieces like La sonnambula, whose musical charms are the quintessence of bel canto.

Act I
Scene 1. Outside a mill. Amina, an orphan brought up by Teresa, the owner of the mill, celebrates her betrothal to the rich young farmer Elvino. Lisa, owner of the village inn, is angry, since she too loves Elvino. A newcomer arrives, in fact Count Rodolfo, although his identity is not yet known, and flirts with Amina, to Elvino’s annoyance. Teresa warns the villagers to go home, before the ghost that haunts the castle appears. The Count goes into the inn, the others disperse, and Amina allays Elvino’s anxieties.

Scene 2. Inside the inn. Lisa, who has recognised the Count, chats to him in his room. They hear a noise, and she hurries away, leaving her scarf behind. Amina is walking in her sleep and comes into the Count’s room, talking of her love for Elvino and lying down to sleep on the sofa. Lisa sees an opportunity to discredit her rival and fetches Elvino. Amina wakes and is distressed at the situation she finds herself in, for Elvino angrily declares there can now be no wedding. She finds sympathy only from Teresa, who puts the scarf she has found there round Amina’s shoulders.

Act II
Scene 1. A wood in a valley near the castle. Sympathetic towards Amina, the villagers try to soften Elvino’s heart, but he bitterly insists his betrothal is at an end and he takes back Amina’s ring.

Scene 2. The village. Lisa is now well established in Elvino’s favour and ready to marry him at once. The Count explains to Elvino the nature of somnambulism, and that Amina had been walking in her sleep, but neither Elvino nor the villagers are prepared to believe in this phenomenon. Teresa tells the people to make less noise, since Amina is asleep. She produces Lisa’s scarf, now implicating Lisa in some sort of duplicity. The proof that finally convinces Elvino of Amina’s innocence comes in the moment when the sleepwalking Amina emerges from the mill and makes her way across the dilapidated bridge over the millstream. Once she has crossed in safety, it is Elvino who wakes her. He is now ready to marry her, and returns to Amina the ring of their betrothal.