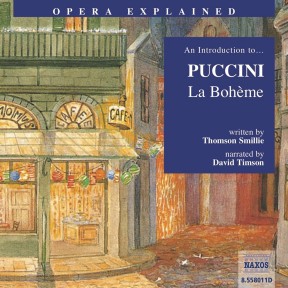 La Bohème is one of the three operas – the others are Carmen and Aida – believed to be the most popular ever written. In the case of La Bohème the reason is that it virtually defines the term ‘romantic’. The poignant story of Mimì and Rodolfo is told in music of such tender beauty, allied, as always, to Puccini’s intuition of what works in the theatre, resulting in an opera that readily appeals to our emotions and senses. ‘Che gelida manina – Your tiny hand is frozen…’ The moment when Mimì and Rodolfo meet and first touch is one of the very great moments of opera – created by the master hand of Giacomo Puccini, who unerringly trod the fine line between romance and sentimentality. Thomson Smillie outlines the background to the opera, explaining how painstakingly the composer worked to achieve this effect. An absorbing introduction both for those approaching La Bohème for the first time and for those wanting to know a bit more than just the big arias.

But in the popular imagination opera remains an Italian concept – and no wonder. From its earliest years Italians dominated the art: cavalli and Monteverdi were among the first to establish its forms; there was a golden age, called the bel canto, at the beginning of the nineteenth century when Bellini, Donizetti, and Rossini ruled supreme; Giuseppe Verdi was probably the most revered artist in history; and, for many, puccini represents, in every sense, the last word in this beloved genre.

While the academics may fume and the pundits deplore, the fact now seems established that puccini was the most popular opera composer of all time. not necessarily the greatest, simply the best-loved. And of his 12 operas, the most popular is La Bohème, a short story, almost an anecdote, of young people falling in and out of love against a background of poverty in the paris of the 1840s.

Puccini was born in Lucca on the western side of Italy in 1858, was trained in the family tradition as a musician and, like most opera composers, fumbled his first opera, Le villi. But with his second, Manon Lescaut in 1893, he scored a smash hit and followed it with a string of operas which remain the backbone of the popular operatic repertory – and the box-office salvation of every opera company. Butterfly, Tosca and La Bohème head the list.

The whole art form of opera had begun in Italy during the Renaissance, as a conscious attempt at a re-nascence, rebirth, of the practices of Greek drama, which is believed to have been sung, not spoken. Italian opera reached its peak with Verdi – the greatest of all Italian opera composers. puccini was his artistic heir, and while his operas may lack the philosophical profundities of the older composer, they have special characteristics of their own.

Puccini was a master of theatrical craftsmanship (as was Verdi), and knew what would work as cannily as any later Broadway impresario. He made his librettists’ lives hell (as did Verdi) until they supplied him with exactly the verses he needed and the dramatic situations to create his sensations and spin his melodies. And the result is a series of operas which deliver an emotional wallop few other composers can match.

Because deep down, all the opera lover wants is a good story and some great melodies. La Bohème delivers both.

The story is extracted from Murger’s Scenes from Bohemian Life, a popular novel telling of the adventures of young and starving artists, in love and in paris. Rodolfo meets Mimì; they have a variously tender, occasionally stormy, love affair. They split and they come together again. In the end both are doomed and defeated by the opera’s omnipresent villain – poverty.

Puccini, who adored women, in life as in art, created the lovely heroine Mimì and invested her with some of his most glorious melodies. Master craftsman that he was, he provided moments of spectacle, a great deal of humour and what used to be called horseplay, some philosophy and much tenderness. The result is an opera that has enchanted the public for 100 years and even has occasionally, as in the superbly constructed third act – one of the perfect acts in opera – delighted the academics and earned the admiration of the grumpiest pundit.