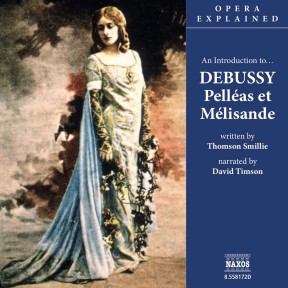 Dating from the last decade of the nineteenth century, Pelléas et Mélisande points the way into the twentieth century. The score is hauntingly beautiful, but there is more to the work than shifting panels of elusive, impressionistic sound. Debussy retains the text of Maeterlinck’s play, and the linguistic subtleties of the French text are matched perfectly by the musical detail. Taking a little time to explore the romantic, elusive world of this opera is particularly rewarding.

No one argues with the statement that Debussy’s Pelléas et Mélisande is among the half-dozen greatest and most influential operas in history. Yet the very adjectives used to describe it – impressionistic, elusive, subtly haunting – may put off the casual opera-goer more attuned to the blood and thunder of Verdi and Wagner or the gentle romance of Puccini. Consequently the work benefits particularly from a short period of study and the sort of historical, literary and musical introduction this disc provides. The vast bulk of the standard operatic repertory was written in the period from Mozart in the 1780s through to the death of Puccini in 1924, and the art form reached a pinnacle in the last quarter of the nineteenth century with the final works of Wagner and the greatest Italian tragedy and comedy in Verdi’s Otello and Falstaff respectively. Dating from the last decade of the nineteenth century, Pelléas et Mélisande points the way into the twentieth century.

While influential, Pelléas et Mélisande is also a work to be enjoyed on its own outstanding merits. The story is the sort of short anecdote that opera treats best.

Prince Golaud has married a waif-princess Mélisande and brought her home to the gloomy castle of his grandfather King Arkel, where she meets and eventually falls in love with Golaud’s half-brother Prince Pelléas. Golaud’s suspicion and mounting jealousy are the driving force of the drama. It culminates in a love scene as impassioned in its understatement as Tristan’s more full-blooded outpourings; and the eventual murder of Pelléas and slow death of Mélisande are as deeply affecting as anything in Wagner’s great love/death drama Tristan und Isolde.

Comparisons between these two works are inevitable, and it is not surprising that Debussy’s impressionistic masterpiece has been dubbed ‘the French Tristan’. The literary source of Debussy’s masterpiece was a play of the same title by the Belgian poet, playwright and philosopher Maurice Maeterlinck. When Debussy attended a performance of the play he asked permission to set it, realising that its subtle use of language, its qualities of understatement and its deeply atmospheric mood exactly suited his developing musical style. He made some cuts in the text but otherwise retained the language of the play and no attempt was made to recast the text in verses suitable for musical setting. The result is a work in which the special cadences, patterns and flow of the French text are perfectly matched by the music, causing some people to refer to Pelléas et Mélisande as ‘the most perfect opera ever written’. Of course there is no such thing – everyone has an opinion on which opera qualifies for that title – but there is no doubting that if opera, music drama, music theatre, call it what you will, is to be defined as a perfect marriage of words and musical expression then the candidacy of Pelléas et Mélisande for the title is assured.

However, Debussy’s masterpiece is admired for more than just its musical- historical significance; indeed, this alone would not be enough to justify its place in the repertory. The qualities of orchestral scene-painting so admired in the composer of L’après midi d’un faune and the tone poem La Mer are brilliantly in evidence as Debussy depicts the gloom and menace of the old castle, the effects of moonlight on water, the shifting power of the sea, and the mounting sexual attraction of the ardent Pelléas for the gentler Mélisande. The beauty of the French language and the subtle power of vocal expression are sensuously expressed in this evocation of a romantic and elusive world.

Imaginary kingdom of Allemonde and its surroundings; period unspecified.

Scene 1. A forest. While out hunting, King Arkel’s grandson Golaud comes across the lovely Mélisande, weeping by a well. She finally tells him her name, but can only manage a confused account of her origins. She agrees to accompany Golaud and marry him.

Scene 2. A room in King Arkel’s castle. Geneviève, mother of the half-brothers Golaud and Pelléas, reads Arkel a letter from Golaud in which he requests that his bride is welcomed. He will come with her in three days’ time, and look for a lamp to be lit which will signify Arkel’s acceptance of her. Arkel agrees that it will be lit.

Scene 3. A stormy evening outside the castle. Pelléas greets Golaud and Mélisande, and Golaud asks him to accompany Mélisande while he himself goes to find his son. Mélisande expresses a sadness that Pelléas plans to go away.

Scene 1. A well in the castle grounds. Pelléas and Mélisande are by the well whose magic powers are said to cure the blind. Mélisande plays with her wedding ring and it falls down into the water. ‘The ring is lost,’ she remarks.

Scene 2. A room in the castle. Golaud has been wounded while out hunting, and is now tended by Mélisande. She expresses a feeling of foreboding, to which Golaud is sympathetic; but then he notices that the wedding ring is missing. She says that she lost it in a cave on the seashore, and he insists that she go to find it at once, taking Pelléas with her.

Scene 3. The cave. Pelléas and Mélisande enter the cave. They see three beggars lying on the ground and Pelléas decides not to disturb them. Mélisande is frightened, but resists Pelléas’s offer of a helping hand.

Scene 1. The castle tower. Mélisande has let down her long hair and sings at the window. As Pelléas goes by, Mélisande leans out and he is engulfed in hair. Golaud appears and reprimands them for behaving like children.

Scene 2. The castle vault. Golaud takes Pelléas down to the stagnant water, where he may ‘smell the stench of death’. They leave hurriedly.

Scene 3. Outside the vault. Golaud tells his brother that he must stay away from Mélisande.

Scene 4. Outside the castle. Golaud uses his child Yniold as a spy: he lifts him up to the window of a room where Pelléas and Mélisande are gazing silently at the light and asks him what they are doing. The child replies, then bursts into tears.

Scene 1. Pelléas has decided to leave, and he arranges to meet Mélisande for the last time by the well.

Scene 2. Arkel enters with Mélisande. He sees her as the agent of renewed happiness, but he has watched and pitied her, as she seems to be waiting for something dreadful. Golaud then enters, furious with Mélisande. He seizes her by her hair, forcing her to her knees, and insults her. Arkel remarks, ‘If I were God, I would have pity on the hearts of men.’

Scene 3. By the well. Yniold has lost a golden ball and comes out to find it.

Scene 4. By the well. Pelléas and Mélisande declare their love for one another and embrace for the first and last time. Golaud rushes on the scene and kills his brother with a sword.

A room in the castle. Mélisande is dying after giving birth to a daughter. Golaud is full of remorse, but when alone with her succumbs to the urge to interrogate her once again, asking her if she betrayed him. But he learns nothing. She gazes sorrowfully at their child and dies. Arkel urges that she should be left in peace.