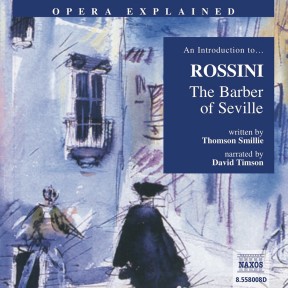 Opera Explained – The Barber of Seville

The Barber of Seville is Rossini’s most popular opera. Its effervescent overture (written originally for another work!) presents a perfect platform for the amusing plot in which the barber, Figaro, stage-manages a romance between Count Almaviva and Rosina, and puts to flight the old suitor, Dr Bartolo. ‘Largo al Factotum’ is one of the most popular arias in opera – nearly 200 years after its first performance it is still one of the great show-stoppers. But why was the opera received with boos and catcalls at its first performance in 1816, and why did Rossini return to the plot and environment presented so sublimely by Mozart? Opera writer Thomson Smillie and actor David Timson present the background in their informative but entertaining manner.

But in the popular imagination opera remains an Italian concept – and no wonder. From its earliest years Italians dominated the art: Cavalli and Monteverdi were among the first to establish its forms; there was a golden age, called the bel canto, at the beginning of the nineteenth century when Bellini, Donizetti, and Rossini ruled supreme; Giuseppe Verdi was probably the most revered artist in history; and, for many, Puccini represents, in every sense, the last word in this beloved genre.

For those in the know – which fortunately can include everyone – the very name of Rossini can bring a smile of pleasure to the lips. There is something infinitely satisfying about a composer who had a spectacularly successful career writing brilliant comedies and stirring tragedies, and who retired at the age of forty to a life of luxury, entertaining his friends and inventing such artery-clogging master- pieces as tournedos Rossini – a filet mignon with pate de foie gras melted over

it. There is something admirable about a composer who, late for a deadline, sim- ply lifted the overture from one of his tragedies and pasted it to the front of his most successful comedy (this present work). And something that appeals to us all is a composer who wrote arias while seated up in bed surrounded by over-stuffed pillows. One day a tenor aria fell off the bed, and he was too lazy to get out of bed to fetch it – so he wrote another.

But, of course, that was later on. The early life of such an artist would be bound to be difficult, even if Rossini had to conspire at times to make it so. He chose as the subject of his spring 1816 offering, the play Le Barbier de Seville, a work which, in its pre-French Revolutionary time, was regarded as subversive. Furthermore several – some say as many as 36 – operatic versions of the play already existed, including one by a then-popular composer, Paisiello, whose name is now forgotten.

So Rossini was asking for trouble – and he got it. The first night at the Teatro Argentina, (the theatre is still there, just across from the bus terminal in downtown Rome), was a famous fiasco. The performance was virtually drowned out by the cat-calls and whistles of a vociferous Roman mob. Heart-broken but undaunted, Rossini returned to the podium for the next performance, which went well – and the opera has never been out of the repertory since. It is likely that it has been performed somewhere every night of its life since the spring of 1816.

The characters – the witless aristocrat, the scheming servant, the guileful maiden and the bullying old guardian – are the stock characters of commedia dell’ arte but are elevated by Rossini’s brilliantly witty and tuneful score to high and hilarious art.

Count Almaviva wants to wed the lovely Rosina, who is fiercely protected by her guardian Doctor Bartolo. Figaro is barber, and factotum, to the household and he will help bring the lovers together. An oily clergyman and a plain but lascivious housekeeper complete the small cast. The result is one of the most completely enjoyable works ever created for the theatre of any nation.

But we should not let the humour and the delight of the piece cloud us either to its skill or to the skills needed to perform it. Rossini brilliantly dresses each of the characters in his or her own musical clothing: the mercurial Figaro, the blustering Bartolo, the tender but knowing Rosina – and so on. In addition he departs from the um chum-chum accompaniments of the day to provide some scintillating orchestral work, including one or two outings for the eponymous and exhilarating Rossini crescendo.

And, perhaps most important, if you wanted to go on working in the wonderful world of Italian Opera, he provided dazzling vocal opportunities for the vain primi of both sexes, those gorgeous exponents of the arts of bel canto who were the combination classical superstars, rock stars and show biz celebrities of the day. He gave them superb opportunities to display their wonderful vocal techniques; runs, trills, breathtaking ensembles, exhilarating patter songs and, where appropriate lovely melodies.

His roles continue to attract the very best singers of every age; or at least those who have the youth, flexibility of voice and, preferably, physical charm to carry off such a demanding combination of musicianship and stage craft.