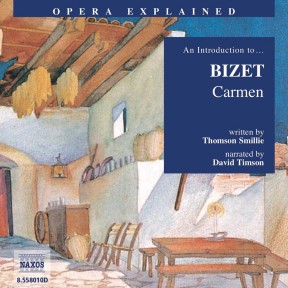 Carmen is among the most popular operas for all the obvious reasons: great characters, a gripping story and fabulous music. But what sets it on a pinnacle is an amazing combination of three factors: a sizzling gipsy heroine (one of the most psychologically complex and compelling characters in all theatre), great atmosphere (Spain, hot sun, the bull-ring) and the prodigality of melodic invention – one great tune after another, at least a dozen of which are the staples of Madison Avenue and the animated cartoon. Like a surprising number of opera-house staples, Carmen was not a success at its first performance. In fact, it is likely that its failure contributed to the early death of the composer. But as Thomson Smillie shows in his accessible introduction, the emotionally driven nature of its heroine and her admirers, Don José and Escamillo, makes Carmen unforgettable. As always in the Opera Explained series, the music itself plays an integral role.

The word ‘opera’ is Latin and means ‘the works’; it represents a synthesis of all the other arts: drama, vocal and orchestral music, dance, light and design. Consequently, it delivers an emotional impact which none of the others can match. the only one of the arts whose origins can be precisely dated, it was ‘invented’ in Italy in 1597 as part of the Renaissance – the rebirth of interest in classical values. As an art form it is truly international, crossing all linguistic and cultural barriers, and it is probably the only one whose audience continues to expand, not in spite of, but because of developments in entertainment technology.

From its early origins in Italy opera spread across Europe, establishing individual and distinctive schools in a number of countries. France had an early and long-standing love affair with it – hence the term grand opéra, referring to the massive five-act creations that graced the Paris Opéra in the nineteenth century. Germany had an excellent school from as early as Mozart’s time, and opera perhaps reached its highest achievement with the mighty music dramas of Richard Wagner. Russia, Great britain, and the Americas have also made their contributions.

But in the popular imagination opera remains an Italian concept – and no wonder. From its earliest years Italians dominated the art: Cavalli and Monteverdi were among the first to establish its forms; there was a golden age, called the bel canto, at the beginning of the nineteenth century when bellini, Donizetti, and Rossini ruled supreme; Giuseppe Verdi was probably the most revered artist in history; and, for many, Puccini represents, in every sense, the last word in this beloved genre.

Although the twentieth century has not been as lavishly endowed with opera composers, it can still boast a few, including Richard Strauss, Igor Stravinsky, and benjamin britten – and, maybe most significantly in the long run, those errant step-children of opera, the broadway musical and the Lloyd Webber spectacular.

It is just possible for a work to be too popular for its own good. the immense success of the orchestral suites from bizet’s Carmen, the perception that few cartoons or commercials can be made without reference to one or other of its show-stopping arias, and, of course, the central place the opera holds in the international repertory, have tended to make some people take it for granted.

Big mistake! In addition to delivering perhaps the most thrilling, action- packed story of any opera, Carmen created about half-a-dozen legends: the sultry gypsy heroine, the strutting toreador, death in the sand, and the sounds, rhythms and textures of Spanish life. Considering that bizet never set foot in Spain, it is gratifying that he may have contributed to the creation of that country’s tourist industry.

All very surprising considering its composer was a mild-mannered French musician whose early career was as a pianist and whose other stage works – with the exception of the occasional revival of The Pearl Fishers – were either left unfinished at his death or have disappeared from the theatre stages.

Bizet was born in 1838 and his great opera was produced just three months before his early death in 1875. Indeed it was thought that the disastrous premiere of Carmen may have been a factor in the composer’s demise, but in fact Carmen was on the way to establishing its fame when the composer died.

Screeds have been written about why Carmen failed to please at her first outing that tell of an unfashionable gypsy heroine, strange new music or chaotic staging. but within months, the work had established its place on the world’s opera stages and its standing as one of the AbC of opera – Aida, Bohème and Carmen.

The story – like all the best opera stories – is simple, almost anecdotal. Don José, an ex-seminarian turned army corporal, falls for the fatal attractions of the earth-child, the sensual gypsy, Carmen. When his sense of duty gets in the way of her love-making, she switches her affections to the more obviously glamorous toreador, Escamillo. Driven by jealous rage, Don José confronts and kills Carmen outside Seville’s bullring.

If the essential elements of a lasting success are sex and violence, then Carmen delivers. but the ‘shameless’ nature of Carmen’s sexuality, the glamorising of a member of a semi-criminal underclass and the explicit nature of the on-stage violence made Carmen X-rated material for its day. this may have caused the initial bourgeois disapproval while guaranteeing its long-term popularity!

And the music! From the glittering first bars of the overture, maybe the most thrilling opening sounds of any opera, through to the final dreadful statement of the ‘fate’ motif on full orchestra, the score grips one with its dramatic intensity while delighting with the freshness of its melodic invention.

It was originally written to have dialogues – in the style of the Opéra- Comique, the opera company where it had its premiere – but recitatives were later substituted and it is in this more ‘grand operatic’ style that the work conquered the world’s stages.

Brilliant craftsmanship, melodic inspiration, dazzling orchestration and an unerring sense of drama make this a work for all time.