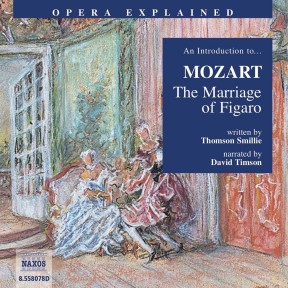 Opera Explained – The Marriage of Figaro

Many opera-lovers would name The Marriage of Figaro as their favourite opera. It appeals to the most intellectual listener, but also to music-lovers seeking great melodies and ensembles (while it remains accessible through its fascinating plot and memorable characters) and to those seeking only entertainment. One of three operas by Mozart to libretti by Lorenzo da Ponte it represents one of the pinnacles not just of operatic but of human achievement.

From its early origins in Italy opera spread across Europe, establishing individual and distinctive schools in a number of countries. France had an early and long-standing love affair with it – hence the term grand opéra, referring to the massive five-act creations that graced the Paris Opéra in the nineteenth century. Germany had an excellent school from as early as Mozart’s time, and opera perhaps reached its highest achievement with the mighty music dramas of richard Wagner. russia, Great Britain and the Americas have also made their contributions.

In the popular imagination, however, opera remains an Italian concept – and no wonder. From its earliest years Italians dominated the art: Cavalli and Monteverdi were among the first to establish its forms; there was a golden age, called the bel canto, at the beginning of the nineteenth century when Bellini, Donizetti and rossini ruled supreme; Giuseppe Verdi was probably the most revered artist in history; and, for many, Puccini represents in every sense the last word in this beloved genre.

Although the twentieth century has not been as lavishly endowed with opera composers, it can still boast a few, including richard Strauss, Igor Stravinsky and Benjamin Britten – and, maybe most significantly in the long run, those errant step-children of opera, the Broadway musical and the Lloyd Webber spectacular.

One definition of a masterpiece could be a work that delights successive generations and gives pleasure to people of different levels of sophistication. On that basis The Marriage of Figaro qualifies as the supreme operatic masterpiece. An impossible claim? Not really, because Mozart’s superb comedy of human relations has been enjoyed for over 200 years at the level of a very sophisticated situation comedy; it can overwhelm us with its melodic invention and can move us to tears by the aching beauty in its expression of the poignancy that lies at the heart of all our lives. To this can be added an insight into the historical context of its time more revelatory than a shelf of history books.

The opera’s action takes place on the eve of the French revolution, that great watershed in western history and the event that set the pattern for future political and social reform. When Figaro plots against his master Count Almaviva we need to think not of the cheeky valet risking reprimand but of a member of the proletariat risking his life to challenge an entrenched autocracy.

It has been said that the greatest works of art are not always those that break new ground but rather those that have the last word on a style or period. Very occasionally there appears a genius who can both say the last word and move an art form into a new era. Beethoven took the symphony and bridged the gap from the formal certainties of the Classical period through to the turbulence of the romantic. Wagner said the last word on romantic opera and paved the way for the dissonances of twentieth-century music. The Marriage of Figaro both incarnates the values of the ancien régime and points the way to the political turmoil of the nineteenth century from which modern democracies will be formed.

The opera has remained in the standard repertoire for over two hundred years, so therefore meets our first criterion of a masterpiece. Though received with only moderate enthusiasm at its first performance in Vienna it soon established itself as a work of incredible daring. The brilliant use of ensemble creates marvellous architectonic finales which are as much a glory of western art as the soaring medieval cathedrals that they resemble.

It is, however, in its fulfilment of the second criterion of a masterpiece that The Marriage of Figaro gains our admiration and love. To the child that was evident in Mozart and lies deep in all of us, Figaro is a wonderful adventure story, with plot and counter-plot, danger and disguise, intrigue and mystery. To the student of human sexuality it presents a tableau from the naive ardency of young Cherubino, through the worldliness of Susanna and the raw lust of Almaviva, to the sublime resignation and forgiveness of the Countess.

However, none of this – brilliant characterisation, superb plot, wonderful dramatic situations – counts for anything without music of genius. Again it is all about levels of sophistication: the child can be delighted by Figaro’s ‘Non più andrai’, the lover can sigh with the Countess’s ‘Dove sono’, and the rest of us sit in awe as the massive Act II finale builds over more than twenty minutes from a duet to a nonet of such dazzling versatility that the most sophisticated critic is silenced in admiration. This surely is the greatest operatic masterpiece of them all.

A room in Count Almaviva’s castle near Seville, mid-eighteenth century. Figaro and Susanna are preparing for their wedding. Susanna tells Figaro that their room is rather near the Count’s, and that he is pursuing her. Figaro resolves to turn the tables on him. Dr Bartolo, the Countess’s ex-guardian, and Marcellina, now in the Count’s service, wish to prevent Figaro’s marriage and hold him to his agreement: to marry Marcellina if he cannot repay a loan. The young page Cherubino tells Susanna of his love for the Countess, for any woman, during which the Count enters. Cherubino hides, and the Count flirts with Susanna. On hearing the music teacher Don Basilio enter, the Count hides too and Basilio gossips about Cherubino’s love for the Countess. Hearing this, the Count emerges, uncovering Cherubino as he does so. realising that the young page has overheard his indiscretions with Susanna, he sends him off to the army.

The Countess’s bedroom. The Countess complains of her husband’s neglect, but Figaro has a plan to trap him, which he tells the Countess and Susanna. Susanna is to agree to an assignation with the Count, but Cherubino is to go instead, disguised in her clothes. While Cherubino is being dressed, the Count knocks on the door and Cherubino hides in the closet. The Countess assures her husband, when he hears a noise, that it is Susanna trying on her wedding dress, but the Count is suspicious. resolving to open the door by force, he leaves with the Countess to find the necessary tools, allowing Susanna to change places with Cherubino, and Cherubino to escape through a window. The Count returns, discovers Susanna, and has to apologise to his wife for doubting her. The gardener Antonio bursts in, complaining that somebody jumped out of the window. Although Figaro tries to take the blame, the Count strongly suspects he is being duped.

A hall in the palace where the wedding is to be held. The Countess dictates a letter for Susanna to give to the Count, arranging an assignation with him. The Count, meanwhile, is determined to marry off Figaro to the elderly Marcellina, but it is revealed that Figaro is Marcellina’s son by Dr Bartolo. A double wedding can now be celebrated: Figaro and Susanna, and Dr Bartolo and Marcellina. A chorus of young girls (including Cherubino in disguise) comes to pay homage to the Countess, and then everybody assembles for the wedding festivities. The Count’s spirits rise when he receives, during the course of the ceremony, the letter from Susanna. Figaro notices that the Count is preoccupied with a letter, but cannot guess who has sent it.

Figaro is not aware that the Countess has been sufficiently affected by her husband’s behaviour to make a plan of her own. When he discovers that Susanna appears to have suggested a secret meeting with the Count, he is furious, not knowing that the Count will be meeting not Susanna but the Countess in Susanna’s clothes. The Count is fooled and makes a passionate declaration of love to ‘Susanna’. Figaro enters and recognises Susanna disguised as the Countess. He then behaves as if he believes she is the Countess and declares his ardent love for her. The Count sees this and, thinking Figaro is his wife’s lover, summons witnesses. realising he is mistaken and has been found out, he asks the Countess for her forgiveness, which she grants him.