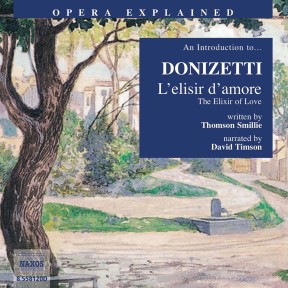 L’elisir d’amore, or The Elixir of Love, has remained popular for almost two centuries because of a touching tale and a galaxy of comic characters adapted from the traditional commedia dell’ arte. Above all Donizetti poured into the score all the warmth and tenderness of the Italian temperament. His melodic invention never ceases to charm whether in the jolly rustic choruses, the exhilarating ‘patter’ numbers, or the sweet sadness of the beautiful arias, of which ‘Una furtiva lagrima’, the great tenor showpiece, is the best known.

From its early origins in Italy opera spread across Europe, establishing individual and distinctive schools in a number of countries. France had an early and long-standing love affair with it – hence the term grand opéra, referring to the massive five-act creations that graced the Paris Opéra in the nineteenth century. Germany had an excellent school from as early as Mozart’s time, and opera perhaps reached its highest achievement with the mighty music dramas of Richard Wagner. Russia, Great Britain and the Americas have also made their contributions.

L’elisir d’amore – The Elixir of Love

One aria does not an opera make, but still it is no bad thing to enhance the second act with a great show-stopper. ‘Una furtiva lagrima’ is an aria whose plangent beauty has made it a concert favourite, in addition to playing a pivotal role in the drama of ‘The Love Potion’, to give L’elisir d’amore its more idiomatic translation.

Donizetti is the Rossinian paradox in reverse, a composer who is best known nowadays for his great dramatic works, which are, along with those of Bellini, the very essence of bel canto. The Maria Callas/Joan Sutherland Donizetti revival of the mid-twentieth century, continued and expanded by June Anderson, Renée Fleming and others, has restored to the repertory works like Lucia di Lammermoor, in which the soprano, going mad in white satin to flute accompaniment, seems the embodiment of the ‘early romantic’ in opera.

However, Donizetti, like Rossini and unlike Bellini (the three names stand together as the pillars of bel canto), was also a master of the art of comic opera (opera buffa). Derived from the earlier commedia dell’arte, its characters are variations on Harlequin, Columbine, Pantaloon etc. – stock characters of the tradition. Usually there is a love-sick boy, a smart chancer who lives on his wits (Figaro is the archetype), and the apparently demure heroine who is often brighter than the men in her life, and always gets her way with them.

The Elixir of Love, to give it the title that has been fixed by generations of opera-lovers, is a melodic masterpiece. Even after repeated hearings, it is breathtaking to hear one superb tune following another in a sort of sunny outpouring of the Italian spirit. There is a naivety about the piece, as if it were always spring, the girls of the chorus endowed with eternal youth and beauty, wine available on tap, and the rustic life unsullied by encroaching modernity.

The story is naive, too. Nemorino (‘Little Nobody’) loves Adina, a rich young widow (in Catholic Italy maidens did not flirt but it was fine for ‘experienced women’ to do so!). She is also being wooed by a boastful soldier, Belcore (‘Sergeant Goodheart’), who has the upper hand. Enter the quack, the peddler, the medicine man Dr Dulcamara (‘Dr Sweet-sour’ – how those funny names recall the pantomime characters of another tradition!) who has the remedy for Nemorino’s shyness. It is the very same love potion that will later cause all that bother in Wagner’s Tristan und Isolde – only in this case it is cheap red wine. Nemorino finds courage in the bottle and eventually woos and wins the lovely Adina. Belcore lives to fight another campaign of the heart and Dr Dulcamara’s reputation and sales get an unexpected boost.

Donizetti’s sweet-and-sour existence – from birth in lovely Bergamo through popular acclaim to death in a lunatic asylum – produced other great comedies, and his Don Pasquale is the equal of this work in melodic invention and sheer joy in living. That the wonderful tradition of Italian opera buffa should not survive the death of Donizetti and the retirement of Rossini – only flaring one last time in Verdi’s Falstaff – makes us all the more grateful that there are works like this, whose sunny disposition, melodic wealth and occasional furtive tears enhance our appreciation of the gentler side of the human condition.

The story takes place in a village in the Basque country.

Scene 1. On Adina’s farm. Young girls and harvesters are resting under the trees. Adina is reading them the story of Tristan and Isolde – of the magician who gave Tristan a magic love potion to remedy his unrequited love for Isolde. A troop of soldiers arrives in the village, one of whom, Belcore, does not hesitate in making advances to Adina. She receives them favourably, and shy young Nemorino, who is in love with Adina, is upset by Belcore’s self-assurance. He wishes he had similar courage to declare his feelings for her. He can only sigh, and Adina tells him she is capricious and fickle, and does not care for his affections. She mocks the stubbornness of those who would die of love.

Scene 2. The village square. Dr Dulcamara arrives in the village, extolling the virtues of his magical remedies. He is greeted enthusiastically. Nemorino asks him if he sells the elixir of Isolde, and Dulcamara produces just the potion (in reality a little bottle of Bordeaux) which he claims will take 24 hours to work – giving him just enough time to make his departure. Nemorino soon begins to feel the effects of the wine, and begins to laugh and joke in Adina’s presence, paying little attention to her. Irritated by this, Adina tells Belcore she will accept his marriage proposal. They must be married immediately, as the garrison has to leave the village the next morning. Nemorino is appalled and begs her to wait another day (to allow time for the potion to work), but Adina is adamant.

Scene 1. At the farmhouse. Hasty preparations for the wedding are underway. Adina, still offended by Nemorino’s indifference towards her, does not want the ceremony to go ahead without him. Nemorino appears, requesting another bottle of elixir from Dr Dulcamara. He agrees to enlist as a soldier under Belcore, in order to earn the money to pay for it.

Scene 2. A rustic courtyard. Gossip is spreading around the village that Nemorino’s uncle has died and left him a large legacy. Not aware of this, Nemorino immediately thinks the elixir is beginning to work as he is surrounded by girls. Dr Dulcamara is amazed at the sight. When Adina comes to enquire about Nemorino’s enlistment, for which she feels responsible, her jealousy is aroused by the attentive young girls. When she hears about the elixir from Dr Dulcamara, she realises the depth not only of Nemorino’s feelings for her, but of hers for him. She buys back his enlistment papers in order to release him, and he is moved to notice the single tear on her cheek (‘Una furtiva lagrima’), indicating that his love for her is returned. Dr Dulcamara then reveals to the crowd the news of Nemorino’s inheritance, which neither Adina nor Nemorino had yet heard. He does a roaring trade as the success of the elixir is the talk of the village, and everybody celebrates the happy couple’s wedding.