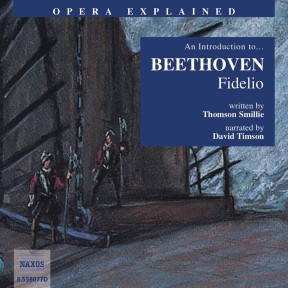 Fidelio is a work like no other. Beethoven’s only opera is about the joy of married love – by a man who never knew that pleasure. It is about heroism by a man who was often mean and petty in his human relations; it is about freedom by a man who was a prisoner of his own deafness; and ultimately it is about joy by a man who experienced precious little of it. Maybe there is a divine logic to that: feelings the artist could not experience but could express find their noblest manifestation in music of overwhelming power and majesty. The most popular operas from the early 19th century are Italian – Rossini, Donizetti, Verdi. We know that Fidelio is important because it was Beethoven’s only opera, but it is not, on the face of it, as much fun as The Barber of Seville, or Don Pasquale. This is why Thomson Smillie’s introduction is so useful. He places the plot and the music against the background of Beethoven’s own turbulent life and suddenly we realise the importance and the uplifting nature of the themes he deals with – starting with fidelity, the name of the opera itself. This is a riveting preparation for seeing or hearing the whole opera.

But in the popular imagination opera remains an Italian concept – and no wonder. From its earliest years Italians dominated the art: Cavalli and Monteverdi were among the first to establish its forms; there was a golden age, called the bel canto, at the beginning of the nineteenth century when Bellini, Donizetti, and Rossini ruled supreme; Giuseppe Verdi was probably the most revered artist in history; and, for many, Puccini represents in every sense the last word in this beloved genre.

It is unsurprising that Beethoven set the operatic world ablaze with his only opera Fidelio. He was the tormented genius who set the concert hall alight with such innately dramatic works as his nine great symphonies, who wrote incandescent music for the piano – his sonatas remain the greatest works for that instrument –, and who brought a new level of drama to the contest between soloist and orchestra in his concertos.

Surely the job of writing an opera should have come easily to him. Well, in fact, it did not, and the existence of four overtures to Fidelio hints at the difficulties. Beethoven was a different type of composer from Mozart, for whom the act of creation was instantaneous and the act of composition – actually writing down the notes – a clerical chore. Beethoven struggled. We know this because Mozart’s extant manuscripts are almost without corrections or second thoughts, whereas Beethoven’s sketchbooks chronicle his labours. These musical struggles are in fact the perfect reflection of a turbulent life. Prodigally gifted as a child, Beethoven had his earliest successes as a performer of his own revolutionary music to a discerning clientele. He never starved in a garret, but in every other sense he fitted, maybe created, the mould of the Romantic artist, hair awry, beetle-browed, frowning on Fate. His private life was a mess. He fought with his family, scorned his patrons, and never achieved anything approaching emotional stability with a woman, despite many ill-fated attempts. He had a major talent for falling in love with women who were unsuitable because they were too young for him, too aristocratic, already married, or all of these things. He also aspired – maybe we all do – to play the hero in his own saga, but any chance of a heroic role was cruelly taken away by the advancing deafness which first destroyed his career as a pianist and conductor, and would later deprive him of the joy of hearing his own work.

‘Joy’ – this is not a word that one associates with such a life. ‘Fidelio’ – how strange to have a heroine whose very name embodies the quality of marital fidelity that Beethoven never knew. And heroism? This was the man who angrily tore up the dedication of his ‘Eroica’ (Heroic) Symphony when his ‘hero’ of the title, Napoleon, crowned himself emperor and proved that he was just as imperially ambitious as any other tyrant.

It is opera’s supreme irony and one of music’s great truths that this tortured genius gave us a work which throughout its two acts chronicles the power of married love, celebrates human dignity, elevates freedom to the highest status among gifts, and culminates in a hymn to joy as resounding and as life-enhancing as the ‘Ode to Joy’ which would later end his Ninth Symphony. This is a work in which our delight in the glory of the music and the nobility of the themes is filtered through tears, and in which the juxtaposition of the mundane and the heroic perfectly reflect the human condition. There are four overtures but only one Fidelio, and only a man of genius who had also suffered could have written it.