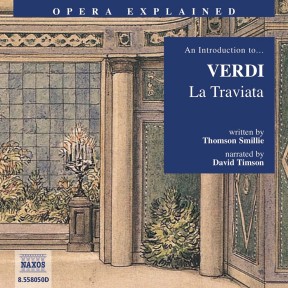 La Traviata owes its enduring popularity to a superb story of young love and fatal sacrifice, set to music by Italy’s master melodist at the peak of his powers. Interest and poignancy are added by the fact that this is a true story – the baritone ‘heavy’ is Alexander Dumas who wrote The Count of Monte Cristo. But it is the central figure, the heroine Violetta, the archetypal ‘whore with the heart of gold’ who dominates the piece. It is her opera and we love her for it. A superb ‘human interest’ story, a captivating cast of characters, and music which is both enchanting and insightful: just some of La Traviata’s ingredients explaining its enduring popularity. The characters are outlined with Smillie’s reliable blend of insight and originality: ‘Violetta, we must accept, is the proverbial Whore with the Heart of Gold, and this ravishing melody goes a long way towards melting the said heart.’ David Timson narrates throughout.

The word ‘opera’ is Latin and means ‘the works’; it represents a synthesis of all the other arts: drama, vocal and orchestral music, dance, light and design. Consequently, it delivers an emotional impact which none of the others can match. the only one of the arts whose origins can be precisely dated, it was ‘invented’ in Italy in 1597 as part of the renaissance – the rebirth of interest in classical values. As an art form it is truly international, crossing all linguistic and cultural barriers, and it is probably the only one whose audience continues to expand, not in spite of, but because of developments in entertainment technology.

From its early origins in Italy opera spread across Europe, establishing individual and distinctive schools in a number of countries. France had an early and long- standing love affair with it – hence the term grand opéra, referring to the massive five-act creations that graced the Paris Opéra in the nineteenth century. Germany had an excellent school from as early as mozart’s time, and opera perhaps reached its highest achievement with the mighty music dramas of richard Wagner. russia, Great Britain, and the Americas have also made their contributions.

But in the popular imagination opera remains an Italian concept – and no wonder. From its earliest years Italians dominated the art: Cavalli and monteverdi were among the first to establish its forms; there was a golden age, called the bel canto, at the beginning of the nineteenth century when Bellini, Donizetti, and rossini ruled supreme; Giuseppe Verdi was probably the most revered artist in history; and, for many, Puccini represents in every sense the last word in this beloved genre.

that such perceptive minds as Beethoven and Wagner should so completely miss the point is one of the great ironies of music. Both these pundits – and much of nineteenth-century opinion – castigated mozart for squandering his genius on such a trivial piece as Così fan tutte. Even the title, Così (thus) fan (do) tutte (all women, or women are all the same), hints at the reason for their disapproval. the plot – ‘social anecdote’ might be a better term – does seem on the surface to be pretty silly stuff. two young officers are engaged to two fashionable young ladies. From their tutor Don Alfonso, usually described as ‘a cynical old bachelor’, the men accept a wager that their women are incapable of fidelity. to prove him wrong the men leave, pretending to go away to war, return heavily disguised, and begin to woo each other’s fiancée. the first act is largely fun and games, but in the emotional and climatic heat of the second act the women switch their affections and at the peak of infidelity contract marriage with their new lovers. the men return in their original guises, the infidelity is revealed, and we all agree – or at least the men do – that women are just like that.

Silly? Perhaps in any other hands yes, but not here. Here, librettist and musician comprise the first great combination of poet and composer who in the last years of the eighteenth century took opera to a pinnacle it has since approached but never surpassed. Lorenzo da Ponte wrote three librettos for Mozart and this trilogy of masterpieces still continues to astonish with its daring and creativity. The Marriage of Figaro, as a play by the French writer Beaumarchais, was widely regarded as subversive. In the defiance of Figaro and the defeat of his aristocratic master it is possible to hear pre-echoes of the tumbrels that would shortly carry the master and his peers to the guillotine. Don Giovanni takes an equally unflattering view of the aristocracy in addition to being a highly amoral work, which no doubt accounts for its immense popularity throughout the Victorian Age.

Così fan tutte did not fare so well at the box office of history and it is only in recent decades that we have really seen beneath the social chit-chat to the raw emotions that da Ponte and mozart expose with an almost surgical probing. the two women, often viewed as sisters, are really very different people. Dorabella is the more bubble-headed, the first to give in to seduction; of the men Guglielmo is her perfect match – warm and passionate, if not exactly sensitive in his dealings with others. Fiordiligi and Ferrando are deeper characters, their love the stuff of tragedy, their grief more profound. And how do we know that? Because the story tells us so? Not really – it is more the music. In addition to being the most prodigally gifted of all composers, mozart was a great sensualist and the first true psychologist of music theatre. As Shakespeare is admired for his plots and revered for his characterisations and his poetry, so mozart takes this simple tale – this social anecdote – and, by fleshing out the characters with music at once sumptuously beautiful and full of character detail, elevates it to great theatre. the story can be told, as above, in a few words, but the implications of mozart’s score repay a lifetime of study.