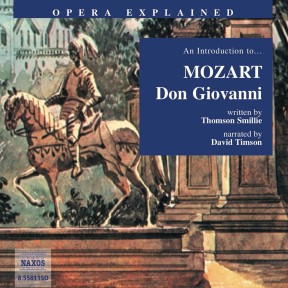 Don Giovanni has long been regarded as Mozart’s supreme theatrical achievement. The subject seems unpromising – the last day in the life of the notorious womaniser Don Juan – but the skill of the librettist allied to the genius of Mozart at the very peak of his powers has created a work which is not only highly entertaining but reflects an incredible understanding of the human condition.

From its early origins in Italy opera spread across Europe, establishing individual and distinctive schools in a number of countries. France had an early and long-standing love affair with it – hence the term grand opéra, referring to the massive five-act creations that graced the Paris Opéra in the 19th century. Germany had an excellent school from as early as Mozart’s time, and opera perhaps reached its highest achievement with the mighty music dramas of Richard Wagner. Russia, Great Britain and the Americas have also made their contributions.

For much of its history Don Giovanni has been considered by many to be the greatest opera ever written. Of course the description is subjective, as there can no more be a greatest opera than a greatest book or a greatest painting; but that has never stopped the wordsmiths, and even a brief exposure to the background of this work, based on the last day in the life of the rake Don Juan (Italianised for the opera), shows why.

It is the work of probably the greatest combination of librettist and composer in history: Lorenzo da Ponte and Wolfgang Amadeus Mozart. If that sounds as wild a claim as the one about ‘the greatest opera ever written’, consider that in a period of a few years this partnership gave the world The Marriage of Figaro, Don Giovanni and Così fan tutte. Closest rivals are Arrigo Boito and Verdi (Otello and Falstaff) and the firm of Wagner and Wagner (he wrote his own libretti).

Like all great theatre works, success starts with the plot. The story of Don Juan and his last adventures dates back around 200 years before Mozart to 16th-century Spain. The idea of having the Don kill a distinguished old soldier, encounter the dead man’s statue, and invite it to dinner is inspired and gives rise in the opera to a gripping confrontation and chilling dénouement.

In padding out this legend for its operatic context, Da Ponte created a drama peopled with richly variegated characters: noble women like Donna Anna and Donna Elvira, grand characters like the too-noble-to-be-true Don Ottavio, a grumbling servant, Leporello, and some very truculent peasants.

Like all masterpieces Don Giovanni can be enjoyed on several levels. The story is exciting, action-packed, and often very funny; yet the undercurrents are invariably dark and the most important fact to keep in mind is that this is the last day in the life of Don Giovanni. Baritones may strut, woo Zerlina in sugared tones, and rattle off the ‘Champagne’ Aria, but nemesis approaches.

To illustrate the multiple levels of meaning, it is possible to take one aria: the so-called ‘Catalogue’ Aria, in which the servant Leporello disabuses Donna Elvira of the notion that she is Don Giovanni’s only love. On the surface it is funny to hear the servant list hundreds of conquests with the killing punchline ‘but in Spain already, 1,003’, and he repeats: ‘1,003. 1,003’. But, when one focuses on the mind of the noble, Catholic, immediate ex-virgin and Spanish provincial lady who believes that Don Giovanni loved her alone, the aria at once conveys a deep cruelty.

However, it is – as ultimately it has to be – the music that defines the experience. Mozart was in the last decade of his short life and at the peak of his immense powers when he wrote Don Giovanni. From the first terrifying bars of the overture with their deeply menacing chords of D minor, through numerous solos, duets and, especially, those quintets and sextets of which Mozart was both creator and never-surpassed master, he builds an impressive architectonic structure. The climactic point when the Don is dragged down to hell forms one of the most famous operatic scenes (D minor chords again) and illustrates that although opera would develop in many ways after Mozart, its level of sophistication would not be surpassed.

Scene 2. A street. Don Giovanni makes advances to a lady before recognising her as a past conquest, Donna Elvira. She has followed him in order to entreat him to return to her. Leporello is left to enlighten her about his master’s way of life. This he does, in his famous ‘Catalogue’ Aria.

Scene 3. In the country. Zerlina and Masetto are to be married. Don Giovanni invites the whole gathering to a banquet at his expense, during which Leporello is to keep Masetto occupied while Don Giovanni seduces Zerlina. She is about to succumb to his advances when Donna Elvira interrupts them and tears Zerlina away. Donna Anna and her fiancé Ottavio ask for Don Giovanni’s help in finding the murderer of Donna Anna’s father but Donna Elvira returns and warns them not to trust Don Giovanni. Donna Anna recognises his voice and realises that it was Don Giovanni who murdered her father.

Scene 4. Garden of Don Giovanni’s palace. Leporello tells his master how he has provided entertainment for the villagers. Zerlina tries to convince Masetto that Don Giovanni has not touched her. Donna Anna, Donna Elvira and Don Ottavio enter, masked, and Don Giovanni bids Leporello invite them to the party.

Scene 5. The three masked guests enter the ballroom and are greeted by Don Giovanni. During the dancing, he leads Zerlina into an adjacent room. She screams for help and the masked figures reveal themselves, rounding on Don Giovanni. He draws his sword, and escapes unhurt.

Scene 1. A street in front of Donna Elvira’s house. Leporello is fed up with the life he is leading, but Don Giovanni manages to pacify him and even persuade him that they should exchange clothes for another amorous adventure – the seduction of Donna Elvira’s attractive maid. Don Giovanni sings a serenade and when Donna Elvira comes down from her balcony, Leporello leads her away. Just as Don Giovanni is serenading the maid, Masetto and other peasants appear, and the supposed Leporello tells them where they can find his master. Don Giovanni is then left alone with Masetto, whom he disarms and thrashes. But Zerlina is not far away – she hurries in to console Masetto.

Scene 2. The courtyard of Donna Anna’s house. Leporello has had enough of Donna Elvira’s affection and is looking for a way out. Zerlina and Masetto arrive in search of Don Giovanni, as do Donna Anna and Don Ottavio. They all believe that they have found their culprit. Elvira defends her beloved, but Leporello sheds his disguise, pleas for mercy, and escapes.

Scene 3. A cemetery with the statue of the Commendatore. Don Giovanni has climbed the cemetery wall to escape his pursuers and he laughs as he relates his adventures to Leporello. A sinister voice is heard coming from the statue of the Commendatore. Don Giovanni forces Leporello to invite the statue to dinner and it nods in acceptance. Scene 4. A room in Donna Anna’s house. Donna Anna assures Don Ottavio that she loves him but asks him to wait a little longer for marriage.

Scene 5. The ballroom in Don Giovanni’s palace. The table is laid and the musicians are playing. Don Giovanni is enjoying supper, when Donna Elvira enters, begging him to repent. He ridicules her and she runs off. As she leaves she shrieks, seeing the marble statue of the Commendatore seeking admittance. Leporello refuses to open the door, so Don Giovanni opens it himself, dropping the lamp as he does so. All is plunged into darkness, except for a ghostly light around the statue. Don Giovanni displays no fear, welcoming his guest, who calls for him to repent. He refuses, and his ‘No!’ is the last word he utters, as he is devoured by flames.

In the Epilogue, Donna Anna, Donna Elvira, Zerlina, Don Ottavio and Masetto enter, seeking Don Giovanni for revenge. Leporello informs them of his master’s terrible punishment and the opera ends with a sort of muted jubilation.