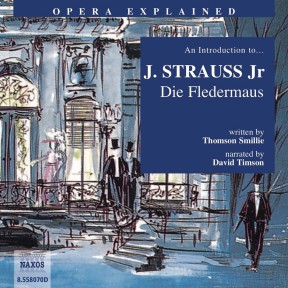 Die Fledermaus is one of the few operatic works to which the phrase ‘never a dull moment’ can be truthfully applied. From the explosive opening of the famous overture – reminiscent of a volley of champagne corks – through the surging energy of the ‘Fledermaus Waltz’ and the many comic numbers, of which the accelerando trio is the finest, up to such huge concerted numbers as the ‘Duidu’ finale to Act II, this is an operetta which almost incarnates nostalgia. Thomson Smillie and David Timson infuse their exploration of Die Fledermaus with as much life as the operetta itself. The most rewarding and memorable extracts are included, and the whole piece is tantalisingly introduced – a trip to see it has to be the next step! Timson begins, “‘Nostalgia’, as the saying goes, ‘may not be what it used to be,’ but thank goodness we still have Johann Strauss’s Die Fledermaus!”

But in the popular imagination opera remains an Italian concept – and no wonder. From its earliest years Italians dominated the art: Cavalli and Monteverdi were among the first to establish its forms; there was a golden age, called the bel canto, at the beginning of the nineteenth century when Bellini, Donizetti, and Rossini ruled supreme; Giuseppe Verdi was probably the most revered artist in history; and, for many, Puccini represents in every sense the last word in this beloved genre.

To the question ‘Is there any such thing as great light music?’ we can answer with a resounding cry of ‘Yes! Die Fledermaus!’ Johann Strauss II created a work which is remarkable in the way it immortalises an era. Nostalgia for lost empires is potent stuff, and we find it in the writings of the Dark Ages after the Fall of Rome as well as in the popularity of Merchant Ivory films. The Austro-Hungarian Empire in the last quarter of the nineteenth century was the decaying stump of the once-mighty Holy Roman Empire. In Voltaire’s famous remark this was not in the least holy, not very Roman, and never really an empire, despite which it gave rise to an especially potent brand of nostalgia. That nostalgia is distilled into its purest form as a waltz, the hypnotic dance in three-time which began life as the last word in daring (partners facing each other in highly unsuitable physical proximity) and ended up as a symbol of lost innocence.

The Strauss family became the ‘Waltz Kings’, and papa, the first Johann Strauss, was a hugely popular bandmaster and composer – the Radetzky March is his best-known piece. It was his son Johann II, however, who created in the ‘Blue Danube’ Waltz and the Emperor Waltz alternative national anthems of the Austrian people. When later in his career he turned to writing for the theatre – which, it is said, was in response to the success of Offenbach’s operettas – he composed a melodic masterpiece in Die Fledermaus, as well as other creditable works, like The Gypsy Baron.

The quality of Die Fledermaus is clear from just a few seconds of the overture. Composers agree that the first few bars of an opera create an indelible impression, often producing the expectation of success or failure. The beginning of Die Fledermaus reminds us of the explosive uncorking of champagne bottles – and quite right too, as the benign influence of bubbly will be as decisive in shaping the action as is Chianti in The Elixir of Love, or Brangaene’s potion in Tristan und Isolde, or Albert Herring’s spiked lemonade, or… you can see the point.

The celebrated Fledermaus waltz, with its swirling, downward-rushing melody, suggests a sort of half-inebriated gaiety, and the accelerando trio, appearing first in the overture, hints at one reason why Die Fledermaus enjoys such universal admiration among both newcomers to opera and seasoned experts. Strauss had a genius for using conventions of grander opera – like the so-called ‘Rossini crescendo’ – to incredible comic effect. Later in the opera we shall hear great concerted ensembles, big set arias, melodrama (speaking over music), even a travesti role (a woman in trousers playing a man’s part). All the trimmings of grandeur but applied to a story which is as light and frothy as the cream on a slice of sachertorte.

Before the action the hero Eisenstein had publicly embarrassed Dr Falke (The Bat of the title). By tricking a disguised Eisenstein into wooing his own wife, also disguised, Falke is able to return the embarrassment and secure ‘The Bat’s Revenge’, which is the unofficial subtitle of the piece. Strauss’s score will exploit every opportunity for gaiety, pathos, high comedy, and, above all, sweet nostalgia. Nostalgia, the cynics may say, is not what it used to be, but as long as Die Fledermaus is performed, it is.