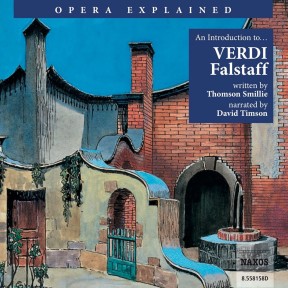 Verdi’s Falstaff repays careful study with real pleasure. It is opera’s happiest irony that the great Italian master should cap a career – distinguished for its blood-and-thunder tragic masterpieces – with the greatest comic opera in the Italian repertory. The genius of Shakespeare is harnessed (in a miracle of compression) by master-librettist Boito to give the eighty-year-old Verdi a superb libretto, on which he lavished more wonderful tunes than most composers manage in a lifetime. Falstaff is the last great Italian comic opera and a worthy end to the tradition.

Verdi’s Falstaff is a glorious autumnal comedy, its libretto based on comic incidents from Shakespeare and set to music by the incomparable Italian composer Giuseppe Verdi. It is a brilliant compilation of scenes from Shakespeare’s plays Henry V parts 1 and 2, and the comedy The Merry Wives of Windsor, and centres around a series of hilarious adventures as the title character pursues a career of wooing for financial gain which is as doomed as it is engaging.

It deserves to be the best-loved opera in the repertory, yet for many its charms are elusive. Can it be that the plot is dull? On the contrary, it is as action-packed as any Victorian dramatic potboiler. Is it lacking in interesting characters? Certainly not: Falstaff himself is one of the great creations of international theatre and the merry wives of Elizabethan Windsor are more than his match. Is it lacking in melody? Absolutely not! Verdi poured into this last work enough great tunes to provide a lifetime’s inspiration for any less prodigally gifted composer.

Maybe the problem – if there is a problem – lies in this very wealth of melody. It almost seems as if Verdi had enough of his best tunes left in him at the age of eighty to write another Il trovatore, another La traviata and one more Rigoletto – and poured them all into this last work. The result is that one superb tune follows another at such speed that we barely have time to grasp the quality of one before the next is upon us. It is in fact this aspect of the opera that makes an introduction to Verdi’s swansong so valuable. Melodic ideas which in any other opera would sustain a ten-minute aria are here blown off in a few seconds, so taking time to savour them – as we do in this introduction – is infinitely worthwhile.

Falstaff’s success as a genuinely funny and touching comic opera is due partly to its dramatic situation but also to its array of colourful characters: Falstaff’s down- and-out companions Bardolph and Pistol, the toweringly vengeful Ford, and as sweet a pair of young lovers as ever sighed upon an opera stage – not to mention the like-minded, conniving ladies.

It is of course opera’s greatest irony that the Italian master-tragedian who only seven years before had astonished the world with its greatest Italian tragic opera – Otello – should return in his eightieth year with a sublime comedy. That he should have chosen the poignant figure of Shakespeare’s Fat Knight for his last word in the theatre, where for many decades he had exposed the tragedy at the root of the human condition, is quite astonishing. But the final irony is that Verdi closed a brilliant career as the master of apparently spontaneous melody with a flawless academic fugue, right at the end of the opera. It is almost as if he was saying to his snooty detractors: ‘You see, I could have written a fugue all along – I just chose not to!’

And which words did he choose to set? Which passage most profoundly summed up a lifetime’s experience? Prospero from The Tempest, perhaps: ‘Our revels now are ended’? Puck’s epilogue from A Midsummer Night’s Dream, maybe:

‘If we shadows have offended…’? No, he took Jacques’ speech from As You Like It – ‘All the world’s a stage, And all the men and women merely players’ – and with his master librettist Boito altered it to: ‘All the world’s a joke and man is born clown’. For all our pretensions to wisdom we are simple fools.

Wagner, Verdi’s great contemporary and rival, had ended his career with a profound spiritual statement, Parsifal, whose depths we are still struggling to plumb. Verdi dismisses the human condition as mere folly. No one is qualified to say which is the truer philosophy or the more appropriate statement for a last artistic will and testament, but there is no doubting which is the more endearing.

Windsor, during the reign of Henry IV.

Scene 1. At the Garter Inn. Dr Caius accuses Sir John Falstaff of being a thief, but Falstaff laughs it off while enjoying his wine. After getting rid of Dr Caius, Falstaff tells his two followers, Bardolph and Pistol, of his plan to rob two men of their money and their wives. He asks them to deliver letters to the two wives, Alice Ford and Meg Page, but they refuse – so he instructs his page to do it.

Scene 2. The Garden of Ford’s house. The two women are amused to get the letters and appalled to discover they are identical. With their neighbour Mistress Quickly and Ford’s daughter Nannetta they discuss how to punish Falstaff. Meanwhile, Bardolph and Pistol have told Ford about Falstaff’s plan: Ford is furious and thinks about revenge. Young Fenton and Nannetta, who are in love, manage to steal a secret kiss.

Scene 1. The Garter Inn. Mistress Quickly appears, to tell Falstaff that Alice Ford will see him between two and three that afternoon. She leaves, and a Signor Fontana arrives – actually Mr Ford in disguise. He offers Falstaff gold in return for his help in capturing Alice Ford’s heart. Falstaff is more than willing, telling Ford that he will already be seeing the lady that afternoon. Left alone when Falstaff goes to change, Ford is livid. Falstaff returns and they leave together.

Scene 2. A room in Ford’s house. Mistress Quickly describes her success to the other women. Nannetta is upset because her father has promised her in marriage to old Dr Caius; the others resolve to make sure she can marry Fenton. At two o’clock, Alice is left to receive Falstaff and the servants bring in a laundry basket. Alice keeps Falstaff at a distance, and Mistress Quickly enters to announce the arrival of Meg Page. Falstaff hides behind a screen, and Meg enters, announcing the unexpected return of Ford – who suspects his wife of entertaining a lover. Ford, Fenton, Caius, Bardolph and Pistol enter, look for Falstaff, then leave the room – at which point, the ladies hide Falstaff in the laundry basket. Nannetta and Fenton hide behind the screen. Ford returns, hears kissing, and, instead of finding the culprit he was looking for, discovers the young lovers. They run away. Alice tells the servants to empty the laundry basket out of the window into the Thames. She then leads her husband to the window to show him Falstaff, bobbing up and down in the river.

Scene 1. In front of the Garter Inn. Falstaff is furious at his soaking. Mistress Quickly assures him that it was a misunderstanding and that Alice Ford is ready to meet him again: he should come to Herne the Hunter’s Oak, disguised as the black huntsman so that nobody will recognise him. Legend has it that Herne hanged himself from the tree and the spot has been haunted ever since. Falstaff and Mistress Quickly go into the inn, and all the others plan the trick: they will disguise themselves as sprites and fairies in order to torment Sir John. Ford also decides that Nannetta’s marriage to Caius should take place that night – but Mistress Quickly overhears this.

Scene 2. Herne’s Oak, Windsor Park. Alice arrives and Falstaff tries to embrace her. Suddenly Meg arrives, saying there is a witch about, and a whole band of elves and goblins throw themselves onto Falstaff, tormenting him. Falstaff humbly begs for mercy before he recognises Bardolph’s red nose. Disguises are dropped, Falstaff accepts the trick with good grace, and Ford says that he forgives him. Then, Ford brings forward his daughter (or so he thinks – it is actually Bardolph in disguise) and announces her betrothal to Dr Caius. Alice presents a second couple who would like to get married at the same time (actually Nannetta and Fenton in disguise). Ford realises too late that he has blessed the union of Caius and Bardolph, and that his daughter is now married to Fenton. He accepts it, and the ladies sing ‘All of us hoodwinked; all laughing, the one at the others’.