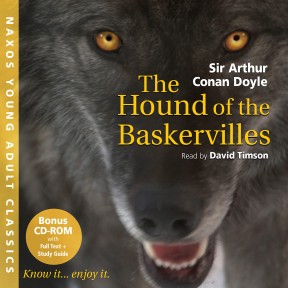 Young Adult Classics – The Hound of the Baskervilles

The ‘Young Adult Classics’ series continues with The Hound of the Baskervilles, the most popular Sherlock Holmes story. It is a chilling tale of a slavering dog on the moor that will excite listeners of any age. The popular classics, presented in an abridged form, are brilliantly brought to life by master Holmes reader David Timson and enhanced with atmospheric music. This is part of the ‘Young Adult Classics’ series launched by Naxos AudioBooks in 2009: each title contains a CD-ROM with extensive ‘teacher notes’ and the full text of the audiobook.

Conan Doyle’s novella of the fog-enshrouded moors is one of his most well known. Holmes and Dr. Watson are enlisted to solve a mystery involving a curse, a “hound from hell,” and a family inheritance. Holmes is, as usual, two steps ahead of everyone else, much to Watson’s delight.

Naxos’s Hound of the Baskervilles is read by David Timson – every character pitch perfect! But the brilliant thing is that there’s a bonus CD-ROM (disc 1) and on it is the complete text, both abridged and unabridged. So a young adult – or an adult – who’s a poor reader, can listen and read at the same time, using a computer or a TV. Entertainment and tuition all in one! And there’s also a study guide for those who want background, author detail and so on. A fabulous piece of kit!

Despite screen effects of mist-enshrouded moors and a slavering monster-hound, there’s nothing like the original Conan Doyle. It’s read here at a ripping pace by the excellent David Timson. The mystery mounts: the Baskerville legend; Mr Stapleton’s violent repulse of Sir Charles Baskerville’s romantic approach to his sister … Is the fiendish hound real, or some hellish emanation? Will cunning and guns be enough to save Sir Charles from its jaws? Included is a stimulating CD-Rom with the complete text and a study guide.

1882 Ran his own medical practice in Plymouth and then Southsea, Portsmouth. With time on his hands, he started writing stories.

1887 A Study in Scarlet published in Beeton’s Christmas Annual.

1891 Unsuccessful as an opthalmologist so continued to write. The first Sherlock Holmes stories appeared in Strand Magazine January 1891.

1891 The White Company, a medieval historical novel regarded by Conan Doyle as one of his best works, published.

1892 The Adventures of Sherlock Holmes published.

1894 The Memoirs of Sherlock Holmes published.

1902 The Return of Sherlock Holmes published.

1902 Knighted for services to literature.

1903 The Exploits of Brigadier Gerard published.

1912 The Lost World, the first of the Professor Challenger stories, published.

1913 The Poison Belt, another Professor Challenger story, published (three more were to come in 1926–8).

1915 The Valley of Fear published.

1917 The Reminiscences of Sherlock Holmes (His Last Bow) published.

1921 The Coming of the Fairies, about the photographs of the Cottingley Fairies, published.

1926 The History of Spiritualism published.

1927 The Casebook of Sherlock Holmes published.

1930 Sir Arthur Conan Doyle died 7 July in the garden of his home in Crowborough, England.