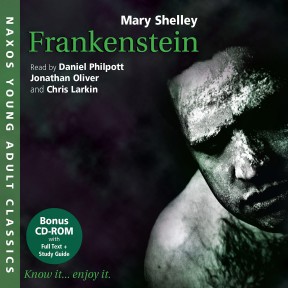 One of the greatest classic horror stories, Mary Shelley’s Gothic novel sees Dr Frankenstein manufacture life – The Monster – only to see it go beyond his control. The original novel is more sympathetic to the monster’s plight than is generally presented on film, making it an important book to be read. This abridged version with music is an ideal introduction to teenagers and forms part of the ‘Young Adult Classics’ series launched by Naxos AudioBooks in 2009: each title contains a CD-ROM with extensive ‘teacher notes’ and the full text of the audiobook.

Mary Shelley’s original tale is not the horror story it has become. Both the inquisitive scientist, Frankenstein, and his terrifying creation are treated with great compassion. A gripping and chillingly gothic three-voice narration. Comes with CD-ROM study guide.

1797 Born Mary Wollstonecraft Godwin on 1 August. Her mother, the philosopher and writer Mary Wollstonecraft, died shortly after giving birth. She and her older half-sister Fanny were brought up by her father and given a liberal education.

1814 Met and became involved with the poet Percy Bysshe Shelley, who was already married. Travelled in Europe with him (and her stepsister Claire Clairmont) and became pregnant. Their prematurely born daughter died.

1816 The Shelleys spent the summer in Switzerland with Lord Byron, Claire and others. In this intense atmosphere, the concept for her most famous novel, Frankenstein, emerged in Mary’s imagination.

1817 What began as an idea for a short story was expanded into a full novel.

1818  Frankenstein: or, The Modern Prometheus was published anonymously on 1 January.

1818 Moved to Italy. Two children were born and died.

1822 Percy Bysshe Shelley was drowned in a storm on 8 July.

1822 Mary returned to England and began to write professionally.

1823 Valperga, her first historical novel was published. It is based on the life of the 14th-century Tuscan despot Castruccio Castracani and a fictional encounter with Countess Euthanasia.

1826 The Last Man, a science fiction novel based in a future world, published. Savaged by critics.

1830 Perkin Warbeck, an historical novel based on the historical character, published.

1835 Lodore, a novel which gives women a central place in the
story, published.

1837 Falkner, a novel which again looks at the role of women
in society, published.

1838 Edited Poetical Works, a collection of the poetry of Percy Bysshe Shelley. She was paid £500.

1839 Began to suffer from ill-health which interrupted her writing.

1848 Moved to live with her son Percy and his wife Jane in Sussex at the Shelleys’ home.

1851 Died on 1 February and was buried in St Peter’s, Bournemouth.