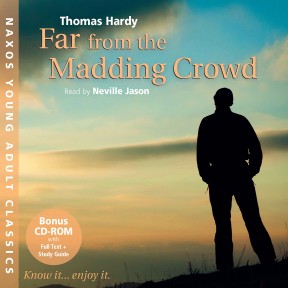 Far from the Madding Crowd was Hardy’s fourth novel, gaining significant popularity and critical attention. It tells of Gabriel, an up-and-coming shepherd, who falls in love with a proud and vain young beauty Bathsheba, who refuses his offer of marriage as she values her independence too much. The novel can be described as an early piece of feminist literature and is regularly studied in schools. This is part of the ‘Young Adult Classics’ series launched by Naxos AudioBooks in 2009: each title contains a CD-ROM with extensive ‘teacher notes’ and the full text of the audiobook.

1853 Studied Latin and French, and read widely during his intensive education.

1862 Travelled to London to work under architect Arthur Blomfield. Attended the International Exhibition and explored London’s cultural life by attending plays and operas, and visiting museums. Started to write poetry in earnest.

1865 How I Built My House, his first article, published.

1867 Returned to Dorset. Considered writing as a profession and wrote the unpublished novel The Poor Man and the Lady.

1870 Travelled to St Juliot to work on the restoration of the church and met Emma Lavinia Gifford.

1873 A Pair of Blue Eyes published. He relinquished his career in architecture to write full time.

1874 Far from the Madding Crowd appeared serially. He married Emma; after some travel, they settled in Sturminster Newton.

1878 The Return of the Native published, with great success. He began to experience life as a celebrity.

1886 The Mayor of Casterbridge published soon after he moved into Max Gate, the Dorchester house that he designed.

1891 Tess of the D’Urbervilles published, causing some controversy due to the unconventional moral views it presented.

1895 The first collected edition of his works brought out by Osgood McIlvaine, the set including the first edition of Jude the Obscure.

1910 Received the Order of Merit and the Freedom of Dorchester.

1912 A ‘definitive’ edition of his works, the Wessex Edition, published.

1912 Emma died suddenly 27 November. Despite their previous estrangement, he made a pilgrimage to the sites of their early love and wrote poetry about her in the following years.

1914 Married his secretary, Florence Dugdale, 39 years his junior. World War I broke out, adding to his pessimism.

1928 Died 11 January. His ashes were buried in Poet’s Corner, Westminster Abbey, and his heart was buried in Emma’s grave. Winter Words, a poetry collection, and his autobiography both published posthumously.