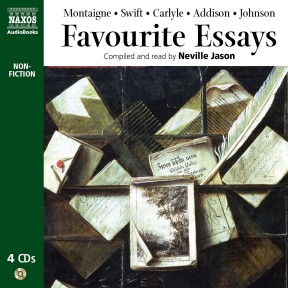 Here, in this unusual collection, are some of the greatest essays in Western literature. Witty, informative and imaginative; the topics vary from starvation in Ireland, fine China, the extension of railways in the Lake District and the tombs in Westminster Abbey. A little like after-dinner monologues, they are passing thoughts expressed as journalism. Neville Jason reads with urbane clarity.

If you like long walks, slow cooking and staring out of the window at nothing in particular, this anthology is for you. The key to enjoying these essays by some of the finest exponents of the English language – Swift, Goldsmith, Johnson, Carlyle, Hazlitt, Lamb et al – on a variety of subjects – chasing loose women, building railways, eating children, lying in bed – is time: they cannot be rushed. Take them at the same leisurely, measured pace as Joseph Addison’s opening sentence: “When I am in a serious humour, I very often walk by myself in Westminster Abbey; where the gloominess of the place, and the use to which it is applied, with the solemnity of the building, and the condition of the people who lie in it, are apt to fill the mind with a kind of melancholy, or rather thoughtfulness, that is not disagreeable.” Whimsical, satirical, passionate, playful, savage – the style may vary, but the quality of the writing belongs to a golden age of literature that disappeared with the quill pen. I bet Neville Jason, whose Latin is as perfect as his English (the essays bristle with classical quotations), still writes with one.

“He who lives everywhere lives nowhere,” wrote Montaigne 400 years ago. Another jewel in this fine collection is Richard Steele’s account of the “inexpressible pleasure” of an early-morning trip down the Thames, picking up gardeners of apricots and melons on their way to market. Neville Jason’s voice is irresistible.

The point of this book is to highlight the essay form as a relatively short, concise piece that tightly argues an idea. Many of the works included are funny, and some are downright shocking, but they’re

all fascinating. Neville Jason has selected his favorites and delivers them in what could be called the quintessential British reading voice. It’s deep, precise, mellifluous, authoritative, and distinctive.

His phrasing and diction are superb, and he pronounces every word with nary a swallowed consonant. Jason also knows how to present these classics so they ring true to the modern ear, which is not easy considering

that most people have not extensively read these authors. Perhaps after hearing Jason’s performance, they will.

Those fortunate enough to have had a classical education will know that the word ‘anthology’ comes from the Greek and means literally a collection of flowers – a bouquet. So here is a bouquet plucked from the garden of literary blooms first planted in the 16th century by Michel de Montaigne.

Like any bouquet, this one does not include every available horticultural specimen (the garden is a large one) and it has no criterion of choice other than the fancy of the gardener and his attempt to include some of the more famous and popular specimens. I offer my sincere apologies to anyone whose favourite essay does not appear here, and to the shades of any of the great authors whose work has not been included.

It may seem strange that a collection of essays by English authors begins with those of a Frenchman, but without this particular Frenchman there would be no such thing as an ‘essay’ because Montaigne is the father, the inventor, the ‘onlie begetter’ of this particular literary form, and it was he who gave it its name.

When Montaigne decided to retire from public life in 1571 at the age of 38 he was still, by our standards, a relatively young man. But he writes of ‘what little remains of his life’, as he consecrates it to setting down on paper his thoughts and impressions. His innate modesty and the knowledge that what he was doing was highly personal and informal led to his naming his writings ‘essaies’, or trials.

The ‘essay’ is now so familiar to us from school, university or newspapers that it requires some mental adjustment on our part to see it as a new and significant departure from the accepted literary forms that existed before. It has been observed that the essay, like the lyric, is the expression of an individualism that first awoke in Western Europe at the end of the Middle Ages. Drama, oratory, epic, narrative and moral poetry stretch back to the Greeks and beyond, but with Montaigne’s attempts to express his thoughts, opinions and observations in a manner so deeply personal as to be autobiographical, a new form of literary expression was born.

‘You must be mature
enough to pontificate,
and wise enough to
do it tactfully…’

Maurice Hewlett wrote, ‘If one had to define an Essay it would be as the written, after-dinner monologue of a well-read, well-satisfied man of, at least, five and forty. Years don’t matter: the spirit of years matters very much. You must be mature enough to pontificate, and wise enough to do it tactfully…’ He might have added ‘wittily’, because humour appears as a very important ingredient of the essay, whether it is used by the writer to make a point or simply to entertain. The first instance of humour in this collection may be found in Swift’s A Modest Proposal. Here it is the scorching humour of the satirist using his wit to arouse horror and disgust in the reader over the poverty and starvation that existed in the author’s native Ireland. How different from the ‘good humour’ recommended by Samuel Johnson, or the cockney humour of Dickens’s chimney sweeps, or the light-hearted humour of G.K. Chesterton’s witty defence of lying in bed.

The charm of the essay, and part of its novelty when first introduced, is that it can be about anything at all, serious or frivolous. An author may use the medium however he wishes: to make a political or social observation, such as in Ruskin’s The Extension of the Railways in the Lake District or Goldsmith’s On National Prejudices; to describe a personal experience, as in Steele’s A Day in London and Addison’s The Tombs in Westminster Abbey; or to evoke an atmosphere, as Leigh Hunt does of a freezing cold winter’s day, in A ‘Now’.

By its very nature the form is elastic and deeply personal, and changes its tone according to the personality and style of the writer. The originality of its ideas and the felicity of the writer’s expression can save an essay from being merely topical and ephemeral, and ensure it a place on bookshelves years, decades, even centuries after its author has made his exit from the world.Montaigne’s example gave rise to a distinguished and prolific school of followers in his own country and the rest of Europe. On this side of the Channel his influence was powerfully felt; Bacon and Leigh Hunt refer to their debt to Montaigne in their writings, and Addison devoted an essay to him.

From Montaigne, writing in the 1570s, to Chesterton, writing in the 1930s, there is a span of some three and a half centuries, and over time styles, subjects, people and fashions changed enormously. To judge from the examples contained in this anthology, essays on the whole seem to have become progressively lighter in tone and less serious in terms of subject matter during that period.

But perhaps we should remember that Montaigne and Bacon were writing for a very small number of educated readers. By the 18th century, newspapers and periodicals such as Steele and Addison’s Tatler and Spectator had become established, and numbers of readers, no longer limited to the scholarly, had increased dramatically.

However, if I am not mistaken, now, at the beginning of the 21st century, a revival of the serious essay seems to be taking place. Among the acres of newsprint on trivial and worthless subjects may be found articles written with a profundity and wit which bears comparison to the work of the notable essayists of the past. A new generation of writers is publishing volumes of essays, the wisdom and intelligence of which are not diminished by being expressed in the less formal English of today. It would seem that the spirit of Montaigne is alive and well, and continuing to inspire those working within the literary form he invented and to which he gave a name.