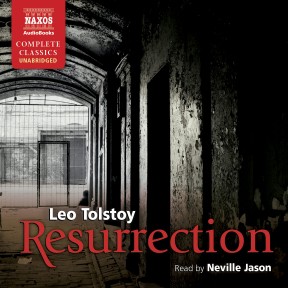 When Prince Dmitri Nekhludov is called for jury duty on a murder case, he little knows how the experience will change his life. Faced with the accused, a prostitute, he recognises Katusha, the young girl he seduced and abandoned many years before, and realises his responsibility for the life of degradation she has been forced to lead. His determination to make amends leads him into the darkest reaches of the Tsarist prison system, and to the beginning of his spiritual regeneration. Based on a true story, Tolstoy’s final novel is a deeply moving and compassionate tale of human frailty and reformation.

‘One of the most beautiful poems of human compassion; perhaps the most truthful ever written’ is how the French author Romain Rolland described Leo Tolstoy’s Resurrection. Compassion is at the heart of this remarkable story of a man’s awakening to the results of his actions, and his attempt to make amends. Despite its often grim and forbidding setting, the work is shot through with optimism and hope; with the assurance that despite all humanity’s faults and misdeeds, there is always the possibility of the re-birth of natural goodness.

This credo, which underlies the narrative of the story, is vividly announced in the novel’s opening paragraph, with a picture of vernal regeneration:

Though hundreds of thousands had done their very best to disfigure the small piece of land on which they were crowded together, by paving the ground with stones, scraping away every vestige of vegetation, cutting down the trees, turning away birds and beasts, and filling the air with the smoke of naptha and coal, still spring was spring, even in the town.

Here, as in many other ways, with his green agenda Tolstoy was ahead of his time. He was in advance too in the theme of this novel: prison reform. Happily many of the more obvious instances of the brutality of prison life have since been eradicated, but despite the general acceptance today that what should be required by society is ‘reform rather than revenge’, the implementation of this maxim remains woefully inadequate.

Resurrection
was greeted
with a mixed
response on
its publication

On the question of serfdom, Tolstoy was fiercely opposed to the selling of ‘souls’, and in favour of enabling the peasants to own the land they worked. But his more extreme view that no man has the right to own land or property is no more accepted today than in his lifetime. The same may be said of his contention that because we are all sinners, we have no right to judge others, a view which would logically lead to the abolition rather than the reform of the legal and penal systems. Frequently Tolstoy expresses views which, although not practicable, open up a debate which throws light on situations which have been traditionally accepted by society. His depiction of the Russian courts and prisons shows the irony of a cruel and inhuman system frequently operated by good, even idealistic, people, blinded by usage to the suffering and injustice they cause.

The basis of the story of Prince Dmitri Nekhludov and Katerina Maslova is taken from a real-life case, in which a man who had seduced and abandoned a young girl in his youth, many years later found himself serving on a jury at her trial. Despite the fact that she had become a prostitute, he was determined to make amends by marrying her, but she died before he could do so. This story had an added personal resonance for Tolstoy. In his youth he had been very different from the saintly social reformer of his later years. A wealthy young aristocrat, he was an officer in the Tsar’s army and lived the same life of drunken dissipation as his fellow officers. On his family’s estate at Yasna Polyana, he seduced a young peasant girl who had a child by him.

But there could hardly be a more dramatic change of character than that which was later to overtake Tolstoy. In his early forties he suffered a mid-life crisis which finally led to his becoming vegetarian, celibate, tee-total, anti-clerical and pacifist. He rejected all forms of worldly pleasure and set himself to live a pure and holy life. Determined to embrace poverty, he gave away the publishing rights to his earlier books and confined his writing to philosophical and religious works. But having taken up the cause of a religious sect, the Dukhobors, who needed money to emigrate to Canada, Tolstoy put into action his long-neglected intention of writing the story of Resurrection, the entire proceeds of which he donated to their cause.

Having abjured novel writing since the publication of Anna Karenina and War and Peace, Resurrection marks Tolstoy’s return to fiction, and his last novel finds him at his most polemical. Here we find his deeply-felt bitterness regarding man’s inhumanity to man movingly expressed, and his aims for social and spiritual improvement energetically argued. Nekhludov’s story echoes the struggle in which Tolstoy was engaged in his own life: the battle between selfishness and moral idealism. In the hands of a lesser artist this might have produced a barren tract, but Tolstoy had lost none of his story-telling powers, and Resurrection is full of drama, pathos, ironic humour and vividly drawn characters.

Nekhludov is by no means a simple do-gooder, but a complex personality who is shocked into action, and only gradually manages to divorce himself from the selfish pursuits of his luxurious life to follow the harsh path of what he sees as his duty. Maslova is the victim of the inequalities of birth: neither peasant nor aristocrat, intelligent and educated, but used as a servant by Nekhludov’s family and thrown out unceremoniously when found to be pregnant. Without means, she is not suited to a peasant life, and her taste for an accustomed comfortable existence leads her inexorably into prostitution.

The prison scenes are drawn from people and situations Tolstoy had met on his prison visits and have a tragic authenticity; the pathetic young man and his mother, unjustly accused of incendiarism, the ‘politicals’, educated people imprisoned for demanding social reform, the dreadful cruelty of the officer who orders a child to be torn from his father’s arms, the terrible scene of the hanging of an ignorant youth. It would be good to think that humanity had progressed further than this in our time, but we read of such events in the newspapers every day.

Unsurprisingly, Resurrection was greeted with a mixed response on its publication. Its honest depiction of sexual matters and realistic sordid environments shocked many readers, and the anti-clerical references led to Tolstoy being excommunicated by the Church. This may be seen as both absurd and unjust when one considers the essentially Christian message of the book: that the answer to humanity’s problems lies in the true reading of the Gospels.

Resurrection languished in the shade of Tolstoy’s better known novels for too long, but its power and nobility, and the compassion it contains for life’s unfortunates, have ensured its permanent position in the canon of the world’s great literature.