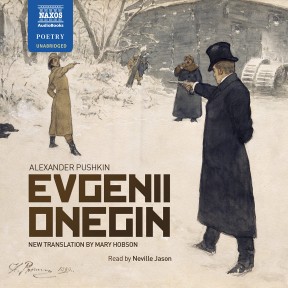 Evgenii Onegin is best known in the West through Tchaikovsky’s opera Eugene Onegin. But the original narrative poem is one of the landmarks of Russian literature. In the poem, the eponymous hero repudiates love, only to later experience the pain of rejection himself. Pushkin’s unique style proves timeless in its exploration of love, life, passion, jealousy and the consequences of social convention. This is the first time the work has appeared on audiobook and is part of the Naxos AudioBooks intention to make the major European literary works available on audiobook.

Because this is a novel in verse, its audio rendition requires especially focused listening. The text’s impact comes as much from plot and character as from the all-important persona Pushkin creates to tell the tale. Neville Jason recounts the unfortunate Onegin’s story in the voice of an overly tolerant uncle – often amused but sometimes saddened or surprised by the unpredictable behaviour of a favourite nephew. In addition, this translation uses a fair amount of rhyme, which, coupled with Jason’s avuncular persona, suggests a nineteenth-century Russian Dr. Seuss. However, given Pushkin’s likely goal of mocking social mores of the time and exposing shallow behaviour, that matter-of-fact avuncular voice sounds just right – self-possessed, didactic, and a little distant.

Aleksandr Pushkin was born in 1799. He was the great-grandson of ‘the negro of Peter the Great’, Gannibal, an African page given to Peter I who, impressed by his intelligence, adopted him as his god- son and sent him to be educated in Paris.

Like all children of the Russian aristocracy, Pushkin spoke only French with his parents; his Russian language was first learned from his much-loved nanny, who remained his friend till her death. When his sometimes scandalous youthful poems got him exiled from St Petersburg to one or other of his country estates, she accompanied him.

Pushkin was never permitted to travel abroad, but his knowledge of his own native Russia was wide, his understanding of it profound. Belinsky, Russian literary critic and Pushkin’s contemporary, rightly described Evgenii Onegin as ‘an encyclopaedia of Russian life’. Its story ranges over every level of his society. Now and then he will break off to entertain us with his views on relations who receive cards from us at Christmas and manage to avoid thinking about us for the rest of the year, how to load a duelling pistol, the sort of friends who render enemies superfluous, dreams and their interpretation, feet, how snow makes travel bearable by filling up the pot-holes, and more, much much more. Yet all this is only the background to an extraordinary story about love and loss and life, written over eight years by a man who matured with his hero Onegin, whose ideal is embodied in his heroine, Tatiana, a work that has found its way to the hearts of generations of Russian readers and stayed there. Pushkin called his masterpiece Evgenii Onegin. But it was Tatiana who came to him first. ‘Unexpectedly’ he writes, in Chapter 8,

I’m in my garden and I see
A young provincial girl appear – My muse, but with a pensive look And carrying a small French book.

‘Perhaps Pushkin would have done even better to use the name Tatiana, not Onegin, as the title of his poem, for she is indisputably its main heroine’, was Dostoevsky’s comment. He saw the work as ‘embodying real Russian life with a creative power and a consummate skill which has not been seen either before or since Pushkin’. Perhaps it is the poet’s unprecedented realism, the beautiful directness of his clear-eyed approach to his characters and his society that has so endeared Evgenii Onegin to readers the world over, and given it its iconic status in Russian literature. At home, it inspired Tchaikovsky to write his stunning opera of the same name; abroad, it has never ceased to challenge translators. Pushkin was not slow to develop his gift. At seven he was writing poems in bed, late into the night; at twelve, accepted as a pupil at the prestigious, newly founded Imperial Lycée, in the grounds of the Tsar’s Petersburg palace, he entertained his friends, and startled the great poet of the 18th century, Derzhavin, with his precocious talent. ‘A second Derzhavin is about to appear in the world’, the elderly poet exclaimed, ‘the young Pushkin. He has already outstripped all other writers!’ Pushkin was 15.

He was 24 when he started work on Onegin. In 1823 the capital was seething with secret societies; idealistic young officers, returned from the Napoleonic wars, were plotting reform, even regicide. Pushkin was in Kishinev. ‘I’m not allowed to come to either Moscow or Petersburg this year’, he writes to his friend Viazemskii, on 5 April. In December, now in Odessa, he sends another friend an excerpt from his Ode on the Death of Napoleon. ‘It’s not good, but here are the most bearable stanzas’, he writes. Then adds: ‘I’m writing a new poem in my spare time – Evgenii Onegin, where I’m choking with bile. I’ve already finished two stanzas.’ Then in a letter to his younger brother, referring to that same friend, he says: ‘Perhaps I’ll send him some excerpts from Onegin; it’s my best work.’

In 1825, the first chapter was published in Petersburg. Pushkin was still in ‘exile’ on his estate, Mikhailovskoe. This was just as well. On 14 December of that year those young idealists staged their badly-organised, abortive uprising in the capital; five were hanged, more than a hundred sent to Siberia. In September of 1826, Pushkin was summoned to appear before Nicholas I. ‘What would you have done on December the 14th if you had been in Petersburg?’ the Tsar asked him. ‘I would have been in the ranks of the rebels’, Pushkin replied. And in January of the following year he smuggled a dangerously seditious poem of support to them via the young wife of Murav’ev, who was about to join her husband in Siberia.

The second chapter of Onegin was published in Moscow earlier in that year, the third chapter not until 1827, with a preface which apologised for the delay caused by ‘extraneous circumstances’. Pushkin promised that the rest would be published shortly. But the completed work did not appear in its entirety until 1830. He found it hard to let go of Onegin. In 1829 he finished the eighth chapter (originally the ninth); in 1830 he completed – and abandoned, as a part of the work, at least, – an account of Onegin’s travels; then he burnt the tenth chapter. He had, at last, understood how to part with his beloved hero.

This is the moment I craved:
the work of long years is completed. Why this mysterious unease, incomprehensible grief?

These are the opening lines of a poem written in that same year. Even then he was not quite finished. In the following year he added Onegin’s letter to Tatiana, inserting it between stanzas XXXII and XXXIII of Chapter 8. It gives their two letters a tragic symmetry; but nothing was allowed to follow those final lines. I defy anyone who hears them to remain unmoved; if ever a story was meant to be read aloud, this is it.