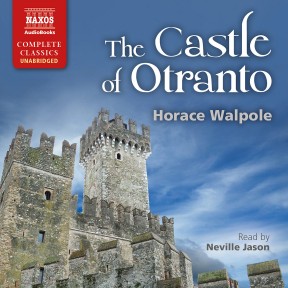 The Castle of Otranto

The Castle of Otranto is regarded as the first Gothic novel. The son of Manfred, Prince of Otranto, is mysteriously killed on his wedding day by a huge helmet. The event leads to a fast-paced story of jealous passion, intrigue, murder and supernatural phenomena unfolding in an atmosphere of thunderclaps, moonlight and dark castle walls – mirroring the inner turmoils of the characters themselves. Horace Walpole’s tale, an immediate success when it first appeared in 1764, is a classic of its genre.

In 1747, Walpole leased a small house he called Strawberry Hill in Twickenham, near London. Two years later he bought it and began remodelling it as a ‘little Gothic castle’, later adding a cloister, gallery and tower.

It is often
called the
first Gothic
novel

In 1757, Walpole set up a printing press at Strawberry Hill, publishing his own Catalogue of Royal and Noble Authors (1758) and Anecdotes of Painting in England (1762–1771) as well as a dramatic tragedy, The Mysterious Mother, in 1768. In 1785, Walpole published Hieroglyphic Tales.

Walpole wrote The Castle of Otranto between June and August of 1764. He tried to pass it off as an actual translation, from the original Italian, of a medieval text written by ‘Onuphrio Muralto’. The first edition of five hundred copies soon sold out, and Walpole admitted, in the second edition published the following year, that the work was his own. The book has rarely, if ever, been out of print since.

The Castle of Otranto is often called the first Gothic novel. It contains almost all the classic elements: a foreign setting, walking skeleton, haunted castle, long-lost child identified by his birthmark, ominous threats and events leading to a dénouement that seems unavoidable because it is the logical conclusion of all the converging, providential actions in
the plot.

The Castle of Otranto wonderfully combines the inner turmoils of a most demonic villain – one can almost see the toasting-fork tail under his fine clothes – a valiant hero, whose strength lies in his innocent willingness to go along with his fate; ineffectual, well-meaning friars, a psychic hermit and virtuous maidens.

All the internal struggles are played out against the most dramatic landscape of snaking dungeon passages, lightning-struck battlements, thick woods and huge supernatural coats of armour waving giant black plumes at castle windows.

The inner and outer aspects of the story are so perfectly matched that it is hard to know which is having most effect and driving the plot. There is, for the listener, a satisfying inevitability that gathers force as the story unrolls, that comes from being caught up in something much larger than the mere mortal. This illuminates the action as dramatically as lightning hits the castle, and makes it as fresh and thrilling today as when it was first devised.

The Gothic novel has been extensively parodied. Here is the real thing: larger-than-life emotions that have a power and intensity overwhelmingly their own.